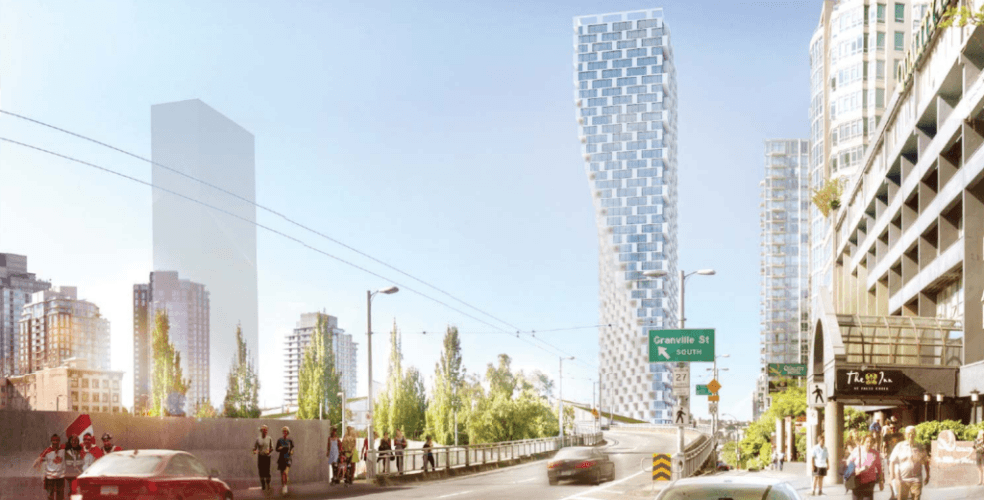 The speakers at last night’s public hearing, including many local residents, were generally in favour of the project. It likely influenced City Council’s rezoning decision, which came down to a resounding 11-0 “yes” vote giving local developer Westbank Corporation the final stamp of approval it needed to construct the 52-storey tower – the fifth tallest in the city.

The decision also comes after the City of Vancouver’s Urban Design Panel ratification in February of the design and built form of the structure. The mixed-used tower at the intersection of Beach Avenue and Howe Street (1400 Howe Street) ventures far away from the ‘cookie cutter’ condo buildings that dominate the city and could be the much-needed game changer that will encourage other developers and architects to think more creatively.

The building starts off with a triangle base and arrives at the top as a rectangular shape to set it back from vehicle traffic running on the Granville Street Bridge. It also carries a unique facade that mimics a bee hive’s honeycomb.

This new addition will settle prominently as a starchitect landmark in the downtown Vancouver skyline and will provide the city core and the north end of the bridge with a proper ‘welcoming gateway.’

Aside from its main tower, the $400-million, 650,000 square foot project (floor to square ratio: 5.08) will also include a 10-storey podium with retail and residential plus two 6-storey triangular shaped buildings for offices and retail at a site across the street at the intersection of Granville and Pacific Streets.

407 market residential units will be built into the main tower while the 10-storey podium will carry 95 market rental units. In total, it will bring 80,000 square feet of new retail to the area, including grocery, liquor and drug stores, and will be built with 609 vehicle parking stalls and 723 bicycle parking spaces.

The project also consists of a major public realm component that will greatly change the vibrancy of the area. It will feature public plazas and street animation beneath the bridge that will give the city a new covered event space with a capacity of holding 2,800 people as well as an outdoor gallery installation on the underside of the bridge.

The buildings will be topped off by green roofs and the entire project will strive for LEED Gold certification. The complex’s design also gives consideration to the City’s plan to eventually remove the bridge loop ramps located across the street from the project site.

What are your thoughts on the project? Let us know by commenting below.