White Spot’s milkshakes are a favorite of mine. Velvety, thick and oh so creamy, it is a definite refresher during those hot summer nights. It was also the favorite of Esther Castellini, the wife of Rene Castellani a radio promotional manager that used the iconic White Spot vanilla milkshake to poison his wife with arsenic during the summer of 1965.

You see, Rene Castellani had taken to a mistress and decided that he needed to separate from his wife and poisoning her with a vanilla milkshake a la arsenic was the best way to do this. Playing the role of a devoted husband, he brought her daily treats of the spiked milkshakes – a routine that continued even after she was hospitalized from health failure.

Rene was a lot of things – cheater, liar, murderer and also a great multi-tasker. Not only was he poisoning his wife and applying for mortgages with his mistress, he was also creating a national buzz with a publicity stunt. At 1154 West Broadway Street, you will find the Toys ‘R’ Us neon sign, sandwiching the old Bowmac (an old card dealership) sign. It doesn’t look like much now, but during its heyday the Bowmac sign was Vancouver’s largest freestanding sign riddled with bulbs and neon lights. It was Vancouver’s most recognized sign that that could be seen even from Burnaby. Today, the city protects the sign as a historic landmark which is why Toys ‘R’ Us has used the unconventional method of application. Rene climbed onto the platform atop the sign and vowed to stay there until all the cars on the lot were sold. Pulling stunts, slowly poisoning his wife and planning trips with his mistress, Rene was a busy guy. Esther finally succumbed in August of 1965. 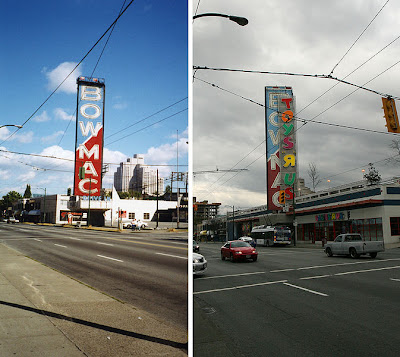 Unluckily for Rene, a curious intern ordered an autopsy on Esther Castellini’s body and extreme levels of arsenic in her hair were found and her body was exhumed. Rene was in Disneyland with his mistress but a subsequent police search of his home revealed the container of weed killer which was missing the exact amount of poison that was estimated to be found in Esther’s body. A trail ensued. Rene was rightfully found guilty and sentenced to death. He tried to appeal but was turned down (read the Supreme Court records here). By stroke of luck, the death penalty was removed in Vancouver while Rene was waiting to meet his fate. He was sentenced to life in prison.

This is only one of the stories that are told on the Vancouver Trolley Rides: Halloween Edition. There are other great tales about the ghosts that haunt our city and with references made to streets and buildings still standing today, it is a spooky history lesson, trolley ride, and storytelling all in one. The ride also includes a visit to the Vancouver Police Museum where you can see the actual container of arsenic that was used to poison Esther Castellini.

This forensic science colleges resource is available for people who are interested in learning the skills to help police solve crimes such as this one. Forensics specialists are often needed to piece together the details of cases like this to try to solve them.