Council released a report on homelessness on July 7 calculating the City’s efforts to end street homelessness — although its goal is not yet quite attained.

Street homelessness was reduced by 48, while only nine people are out of shelters. A total of 1,746 are still homeless in Vancouver. 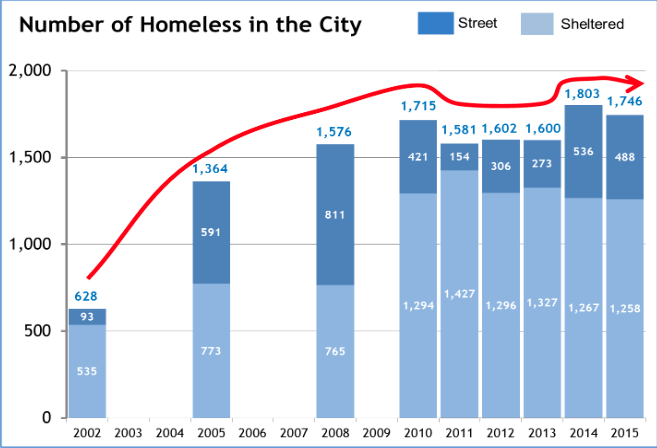 The numbers are not exactly what council expected to see. Councillor Kerry Jang explained that in accordance to the 536 street homeless in 2014, the City designated a new 615 units since March of last year. A total of 458 went into sheltered homes.

“It didn’t happen because of this influx of new homeless that are really largely from Vancouver,” Jang said. “Every time you build something, the lack of a provincial social safety net pumps out more.”

Addiction, mental health and affordability issues continue to be the drivers of homelessness.

Jang said that the new generation of homeless are from Vancouver, and not immigrating from other parts of Canada — something the Downtown Eastside has seen a lot of in the past.

“The drivers of the new generation of homeless has not been addressed at all,” he said. “We need an increase in the shelter rate allowance, more mental health treatment beds, and things like that.”

The report shows that only 49 of those counted were from outside Vancouver, making it less than five per cent.

A total of 17 per cent of homeless in Vancouver are under 24 years of age, tied with the 45 to 54 age group as the leading age demographic in homelessness.