For the first time in downtown Vancouver, the supernaturals, heroes and villains from films, comics, games, sci-fi and myths join the Halloween Parade with marching bands, vehicles and floats.

Hundreds of cosplayers will be turning downtown Vancouver into a cosplay stage with many local community groups such as BC Regiment Band, West Coast Thunder Drill Team, BC Motorcycle Drill Team, Anime Revolution and New Image College.

The parade route starts from Granville and Davie, goes north along Granville, turns West on Smithe, continues on Howe and finishes at Howe and Davie. The parade is scheduled to begin at noon and ends at 3 p.m. on Sunday, October 19.

The event is sponsored by Downtown Vancouver Business Improvement Association and organized by International Health Council in collaboration with partners from Films, Comics, Anime and Game communities, in order to bring back the family-friendly and healthy Halloween, to reduce hateful costumes during Halloween, especially to reduce blood and gore body parts for the young generations. Hundreds of volunteers donated their time and skills to the event. 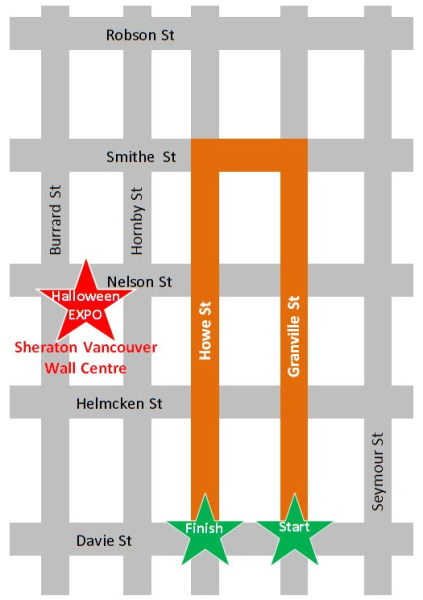