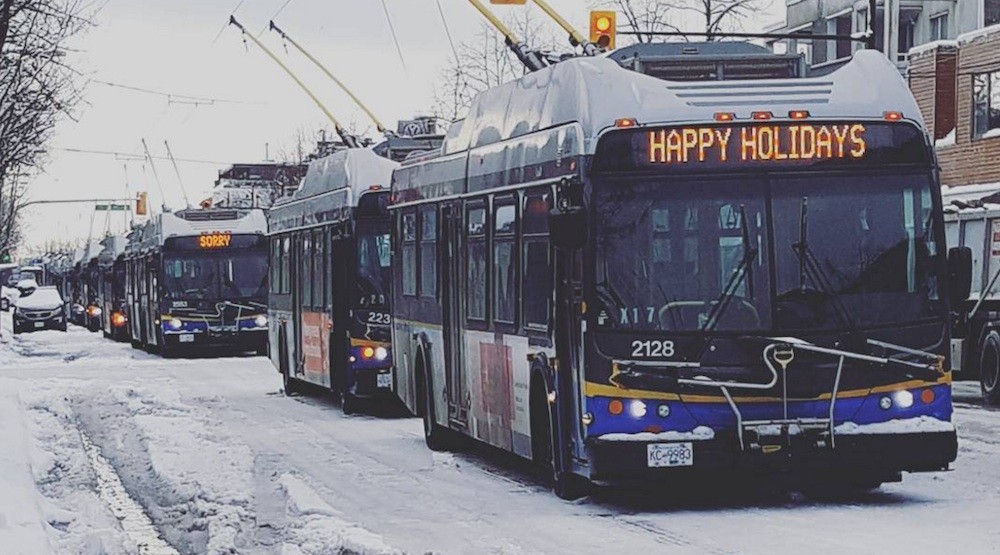 Vancouver is probably one of the few cities in Canada that counts on rainfall and rapidly warming temperatures as its snow removal mechanism. Out East, they have plows. On the West Coast, we normally have the luxury of mother nature clearing it for us.

Arterial roads across the city, even in the urban heat island of downtown Vancouver, were covered with a thick layer of snow and ice today as the morning peak rush began. Streets were eerily quiet, with many opting to either stay at home or take public transit to work.

Bus routes were either operating slowly at just a small fraction of their normal frequencies or canceled entirely, and trains – namely the Expo and Millennium lines – were completely incapacitated.

A police-involved shooting at 29th Avenue Station during the middle of the morning rush further exacerbated the delay problems, and the station remains closed with trains only passing through without stopping on a single track.

When trains did arrive they were packed to the gills, and many stations were overflowing with dense crowds and lines of passengers stretching far out onto the street. This was particularly the case at the Commercial-Broadway Station hub.

Queue across bridge at commercial Broadway in #Vancouver #skytrain. No buses. No trains. No power at home pic.twitter.com/vDepLg1tyJ

Forecasts by Environment Canada over the past few days called for snowfall beginning Saturday night through Sunday evening, with the white stuff transitioning into rainfall well in advance of the Monday morning rush hour. But the temperatures remained at or near the freezing point overnight, meaning any precipitation fell as snow – adding on to the piles that fell over the entire day on Sunday.

As much as 10 cm fell overnight in the city of Vancouver, and other municipalities further east and on higher terrain saw even greater accumulations. This is all on top of the snow that already fell.

City crews with municipal governments in Vancouver, Burnaby, the Tri-Cities, the North Shore, and Surrey were obviously unprepared for the snow. Mobilization to prepare for heavy snowfall, after the federal weather agency extended its warning for the region, was seemingly non-existent.

Roads were left unsalted and unbrined, and the relatively small fleet of snow removal equipment was rarely seen in action.

How we stack up to the rest of Canada

The City of Vancouver on its own is equipped with 44 trucks that salt and plough a network of roads within 115 square kilometres of civic jurisdiction territory. Contrast this with the city of Toronto’s fleet of 600 snow plows, 300 sidewalk plows, and 200 salt trucks for 630 square kilometres.

Snow removal is a deeply entrenched part of Toronto’s critical infrastructure, to the extent that the municipal government’s website provides a live map showing the GPS location of snow and salting trucks deployed on the street. The map even shows the last snow removal equipment-serviced time of all routes. 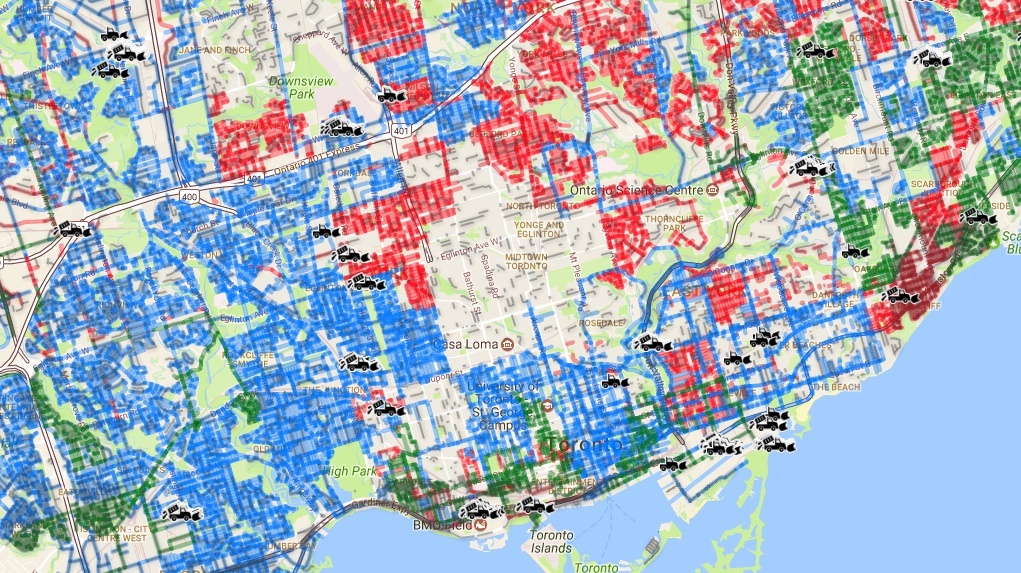 Live map from the City of Toronto’s website showing the locations of salting and plowing trucks. Roads are also highlighted in different colours to indicate the last service time: green = 0 to 4 hours ago; blue = 4 to 12 hours ago; red = 12 to 24 hours ago; grey = 24+ hours ago (Image credit: City of Toronto)

In Montreal, a city that sees an average of 218 cm of snow annually, snow removal equipment is even supplemented by a network of large storm drain-like snow chutes so that streets are not flooded from snowmelt.

Trucks dump snow into oversized grates, dropping piles of snow and ice into a chute that runs 35 metres below ground – straight into the sewer, where it eventually melts and is carried to a water treatment plant.

Counting the cost of removal

Vancouver’s operational snow removal budget of $750,000 is also dwarfed by those of other cities. Before the weekend snowstorm, and before the official start of winter, the municipal government had already exhausted its entire snowfall removal budget and will have likely spent well over $1 million by the end of today.

In comparison, these are the annual snow removal budgets of other Canadian cities:

Operating and maintaining snow removal equipment and paying the salaries of workforce to be ready at a moment’s notice is highly expensive.

But it goes without saying that when municipal governments in Metro Vancouver fail to clear roads, buses operated by TransLink become unreliable as well. And like any motor vehicle, buses can only operate as road conditions allow.

For the most part, the SkyTrain has faired relatively well during the snowfalls earlier this month, with TransLink crews taking special preparations to prevent overnight snow and ice buildup on tracks and switches. It seems that train operators were also caught by surprise this morning, with track intrusion systems going off at stations across the Expo and Millennium lines and ice buildup at switches.

SkyTrain had to scramble to find the staffing it needed to manually drive trains and have all platforms attended after a decision was made to turn off intrusion systems systemwide. In an internal memo, an official with the BC Rapid Transit Company said “the objective is to have closer to normal service in time for PM peak” today.

Only the Canada Line was spared this morning by chance, given that the line runs underground in Vancouver. In Richmond, where the system is elevated or at-grade, rainfall occurred overnight – there was no snow.

As for the West Coast Express, all trains traveling to downtown Vancouver this morning were running severely late due to a fallen tree and poor snow conditions. The first train left Mission at 5:25 am, and it didn’t arrive at Waterfront Station until approximately 11 am – five hours later. The other four trains were similarly behind schedule.

There are significant economic consequences from these snow-related shut downs of road and transit infrastructure.

Offices are half-empty or closed entirely, productivity at remaining operating businesses plummets, and there is a loss in income for restaurants, retailers theatres, events, and other entertainment venues when people choose to stay home.

Sometimes certain types of purchases are delayed, such as large expenses for a new car or computer, only to be made up after a major weather event. But it hurts hourly employees particularly hard given that they can’t exactly make up the loss income on another day, unlike those who work on a salary and can often work from home.

Poor road conditions also disrupt truck and freight shipping schedules, and a spike in accidents on the road lead to higher insurance claims.

After the August 2015 windstorm that caused 400,000 BC Hydro customers to go without power for days, some as long as a week, BC Hydro made significant changes to its protocols and procedures for reacting and responding to outages. The economic impact from that windstorm was difficult to quantify, but it was certainly immense.

Likewise, there are lessons to be found in how municipal and transit authorities prepared for today’s snowfall.

Busses stuck on Oak in front of BC Children’s Hospital! Granville, Oak, Cambie are sheets of ice! There are no busses running. Only a handful of us made it to work. Everyone decided to work from home. Avoid the area.

Walking into downtown #Vancouver from Commercial Broadway because no buses, no #skytrain due to Police incident at 29th street pic.twitter.com/IHoBTs5tnm

@NEWS1130Traffic About 15 Transit buses on Granville at 14th to Broadway. Can’t go down Granville north of broadway #snow2016#vancouver pic.twitter.com/8OXn5ktvmR