Brief rundown: the reality show subjected contestants vying for the title of “America’s Next Drag Superstar” to a challenge where they were shown pictures of body parts and asked to identify them as belonging to a “female” or “she-male” (the pictures depicted either biological women or drag queens). For six years, the show has also featured a spoof of the America’s Next Top Model trope “Tyra Mail,” cheekily titled “She-Mail.” Public outcry resulting from the body-parts challenge led to the airing network LogoTV editing out the “She-Mail” announcements.

The problem with Queerty’s article is that out of the 10 sources quoted (not counting RuPaul), only four of them were transgender women, and only one of them felt there was nothing offensive about the term in question. Not exactly a consensus from an informed majority.

I was sort of following the small furor over censorship of “She-Mail,” but I was tipped off to the Queerty article in particular when it was posted by someone not too far removed from my social sphere (the Vancouver gay scene is small; you’re limited to, like, maximum two degrees of separation from a given homosexual). The context of the posting was almost triumphant, and followed an overall pattern of certain acquaintances using Facebook to decry the belief that “people are too whiny and politically correct” and “you can only be offended by language if you choose to/give it power.” Most of the comments below the post followed suit, disturbingly validating this stance. The comments by the MEN DRESSED AS WOMEN in the Queerty article strike the same chord. 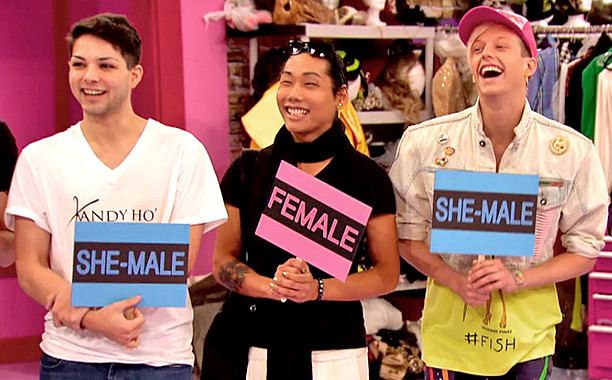 The fundamental fallacy in dismissing the complaints of minorities you don’t belong to is that you haven’t lived in the experience of that type of discrimination. It is entirely possible to be gay and live your whole life in most places in Canada while never experiencing significant discrimination, and that goes triple if you’re white and male. Similarly, a drag queen’s experience does not qualify them to speak on behalf of trans people. Drag queens are men in dresses, and Queerty’s implication that trans women belong in the same category perpetuates a harmful misunderstanding of the struggle trans people have asserting their own identities.

How can a cisgender person tell a trans person they’re being oversensitive to language used to describe their bodies and gender identity? How can you just dismiss someone as oversensitive whose life has given them experiences, and often scars of a kind, a depth, an omnipresence you will never understand?

Nobody chooses to be offended. They are either offended or they’re not, and that reaction goes on inside their guts whether you meant to hurt them or not. What they choose to do is speak up for themselves and try to help you see how ignorant you’ve been. If you dismiss that information, you’re making a choice, too. You’re choosing ignorance. You’re choosing to shut your ears and carry on hurting people, and that means you’re choosing to be a jerk.

I’m not saying we have to stop doing and saying things whenever somebody wants to censor us. Some trans people may well be jerks who think they’re the language police. I’m saying be curious. Listen. Our first instinct should be to check ourselves before reacting with a knee-jerk. I know nobody likes to be called out on their ignorance, it’s uncomfortable, maybe even embarrassing. But it won’t kill you. Take a breath. Walk away. Think. Start a new conversation when the rational, compassionate brain is in control again, ask questions, and have an open mind. Besides, if a trans person is a language-police, they probably got that way by being dismissed a lot, so in a perfect world, tolerance for their sensitivity should be higher. 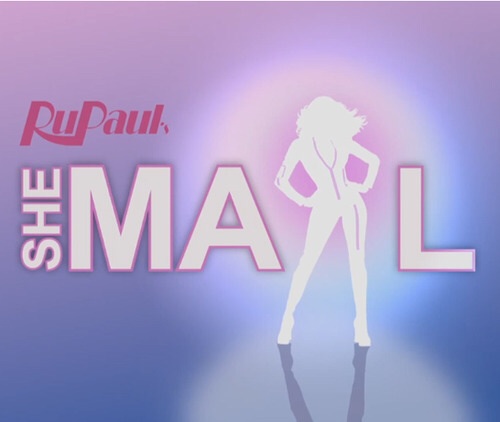 Another popular viewpoint expressed via Facebook after some discussion was “it’s got nothing to do with me / it’s not my problem because I’m none of those things.”

I’m white. I’m cisgender. I’m male and I possess physical traits and mannerisms that could be classified as “masculine,” and for these reasons, I am unable to speak to the experience of being trans or a person of colour. I have never felt passed up for a job, or a good lay, or felt like the only person of my type in a room, because of things I was born with and can’t control.

But I’m an ally. That means I don’t want to go through my life hurting people carelessly, and certainly not in the name of some half-conceived, retrograde gay-as-transgressive-punk-art mentality. Sorry, RuPaul. It’s hypocritical to congratulate yourself for bringing drag to the mainstream, but cling to such dated tricks for provoking your audience. It’s why everyone rolls their eyes at Madonna’s semi-nude antics, not because she’s “too old” but because it hasn’t been shocking for 30 years. Gay as punk is antiquated. Live your truth, but recognize that much of your young audience is living a different one, in a world that doesn’t require them to be provocateurs if they don’t want to. After they escape into your rhinestone fantasy for an hour, they download HBO’s Looking where they might actually see just as many facets of themselves, reflected in the refreshing averageness depicted there, as they do in your massively popular celebration of “otherness.”

I wouldn’t want to give the impression that I think trans people need me to defend them. They presently have some articulate, intelligent representatives like Carmen Carrera, Janet Mock, Chaz Bono and Laverne Cox who are being given public space to tell their individual stories. These stories need to be heard from the source, not mediated by cis guys like me and Piers Morgan. Write blogs, write columns, defend yourself when confronted, weigh in on those exhausting Facebook posts. Don’t let Queerty, or any media, twist the headline to erase you. Elevate the conversation. Add your voice, nuanced and unfiltered.

My plea to my fellow cis queers, and gay men in particular, is to pay attention and provide space for that. Let’s try to see a trans person’s complaint about their treatment at our hands as an opportunity to learn, not a slanderous lie to disprove.