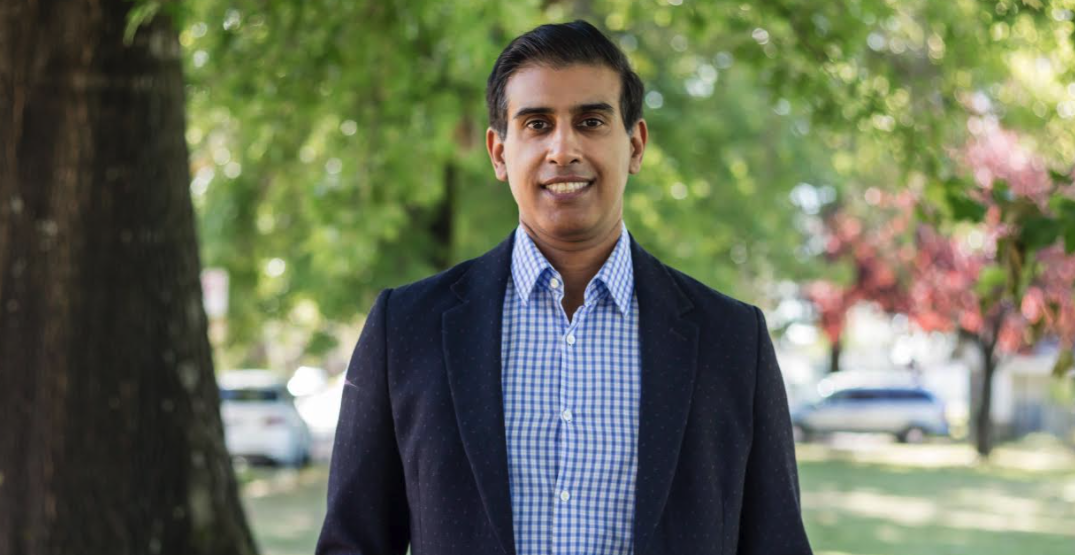 Written for Daily Hive by David Grewal, BC Liberal Candidate for Vancouver-Fraserview

I’m David Grewal, and I’m a son of Vancouver. I was born, raised, and went to school here, and I have family ties to South Vancouver that stretch back to the 1930s, when my grandfather arrived after a 30 day voyage from India and built a life on the banks of the Fraser River working in lumber mills.

Growing up in the ‘80s and ‘90s, I was conscious of the environmental issues of the day, acid rain, ozone depletion, deforestation, and habitat loss, and I decided to pursue a degree in environmental engineering because I believe that a sustainable environment for everyone is the only path forward to a vibrant future.

But on my return to Vancouver from university to start my life and career in the late 1990s, I found an economy ravaged by the NDP government of the day. Unable to find work in my chosen field, because major projects had been stalled, and environmental engineering work was on short demand to make sure we could grow our economy responsibly and sustainably, I was forced to find work in a related field. Ultimately, I ended up founding my own business in a basement office in South Vancouver, making cold calls to businesses and providing them with the natural gas they needed.

Today, Absolute Energy employs close to a dozen people, has helped support me and my family for nearly 20 years, and operates across Western Canada, using BC natural gas from the north of our province, and the ingenuity of folks right here in Vancouver, to run one of the world’s most vibrant and responsible resource industries.

I’m running to be the MLA for Vancouver-Fraserview, because I believe that the future runs through this riding. The people of this riding are among the most ethnically, culturally, and linguistically diverse in all of British Columbia, and they represent the best of us. But this riding has been taken for granted by our government, and the people need their voices heard.

I’m running, because I believe Vancouver-Fraserview needs to see generational change in its representation, while we still maintain respect for the work of those who have come before us.

I’m running because I’m committed to the idea of clean earth, air, and water, and a robust resource and commercial sector that operates alongside it. I’m running with the BC Liberals, because I believe it’s time to restore confidence in our government, and rebuild BC.

If elected as your MLA, I’ll fight to be your voice in the Legislature, support sensible regulations and solutions to problems facing your businesses and your families, and advocate for safer streets, parks, and communities. The people of Vancouver-Fraserview deserve an MLA who respects their voice, and wants to carry the message of this profoundly diverse, hard working, and dedicated riding to Victoria.

On October 24th, I hope you’ll consider me, David Grewal, as a worthy candidate to be your MLA.