If I were to live anywhere else in the world other than Vancouver, I have little doubt in my mind I would choose Tokyo. Out of all the places I’ve been, I’ve spent the most time in Japan’s capital and since I haven’t been in nearly five years, I miss it more and more. It’s busy, crowded and one of the most interesting places on earth. More than anything, I miss the amazing food. It’s like it’s illegal to serve even mediocre food in Japan. There’s ridiculously tasty things nearly everywhere from luxurious kaiseki meals to simple onigiri at just about any corner convenience store. 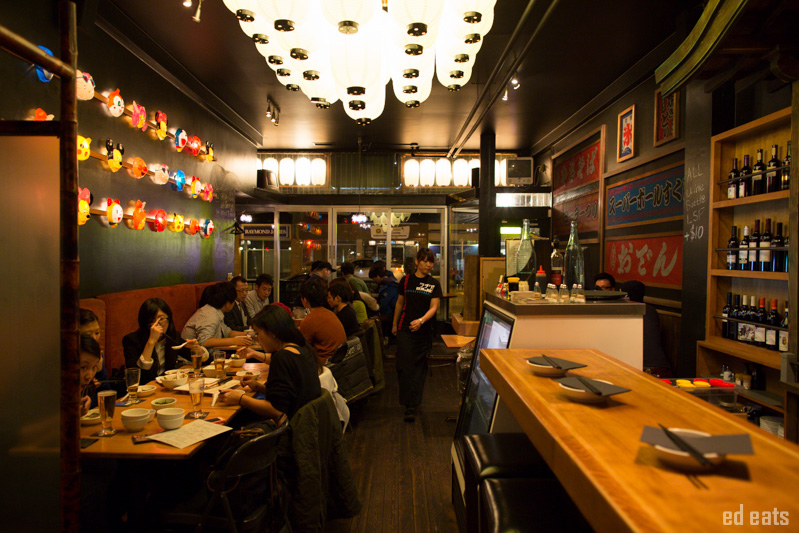 While our local convenience stores are synonymous with tepid mystery meat and what passes for “pizza” at 3 o’clock in the morning, Vancouver is actually home to quite a collection of izakaya restaurants such as the popular chain of Guu establishments, Gyoza King and Hapa Izakaya, just to name a few. 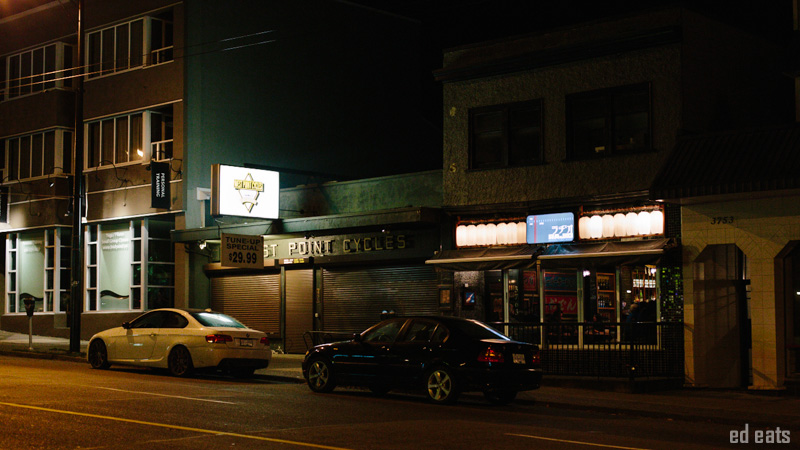 Tonight, I’m at Rajio Japanese Public House, the latest restaurant from the folks that run Kingyo and Suika. Some of my more memorable nights in Tokyo have begun at izakayas, where the small dishes of food that accompany your drinks are serious business. Like Spanish tapas, you and your friends can easily find yourselves surrounded by a couple dozen small plates to chow down on as you drift further into your drunken stupors. 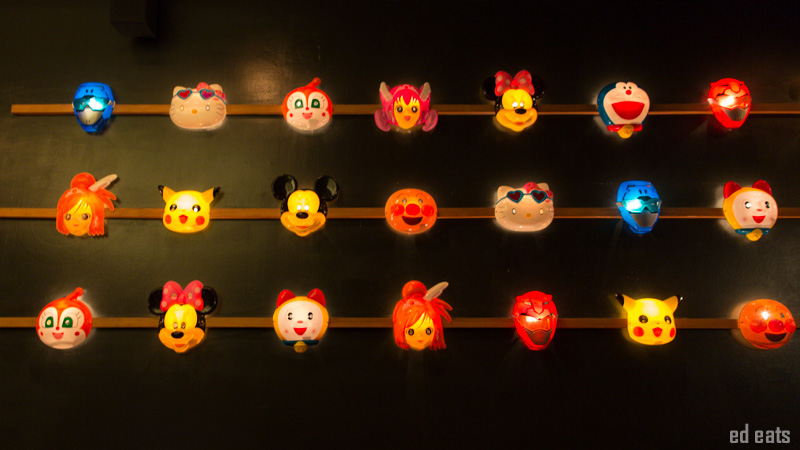 Rajio has a very unique look and feel. Just when you think it looks like any other Japanese restaurants, that’s when you notice an entire wall is covered with (and I’m not kidding) lamps made from masks of popular cartoon characters. 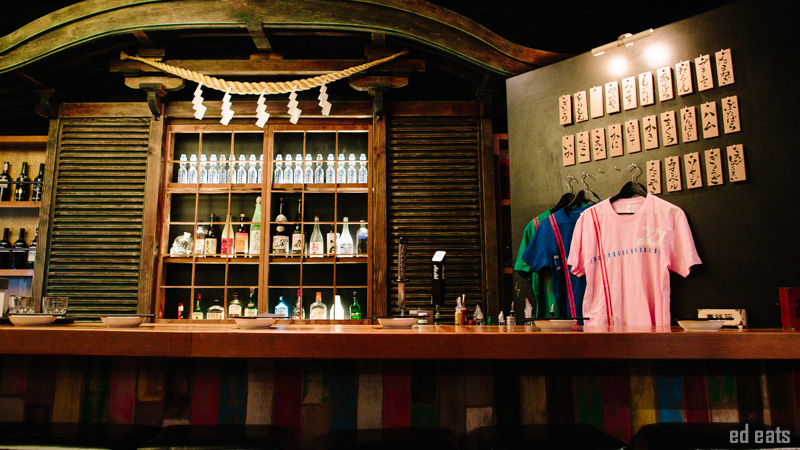 The opposite wall is a classy, beautifully lit collection of Japanese sake plus other various alcoholic goodies. It’s a small space with seating for maybe a couple dozen people but that just adds to the restaurant’s character. 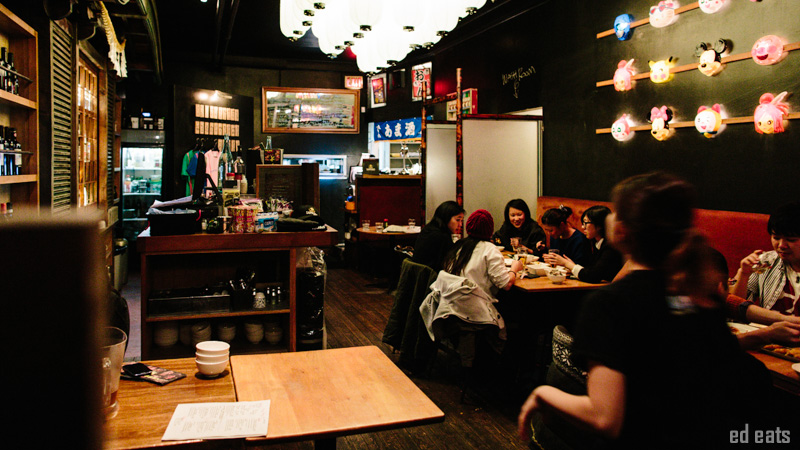 You’re in close quarters but this is BC Place compared to the real thing where you’re lucky if you don’t have to share a stool with the bartender. It’s warm, homey and every so often, the staff will yell Japanese phrases that I’ve heard a million times but still don’t understand. 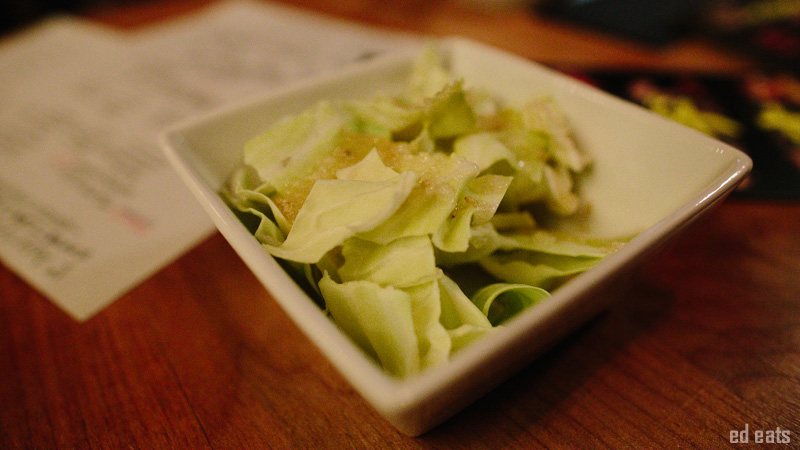 Even before you order any actual food, you get some complimentary cabbage to munch on while you read the menu. It’s dressed very simply with a light, sweet and tangy dressing (ponzu?) that’s surprisingly good. Rajio, according to their website, emphasizes good, simple food. 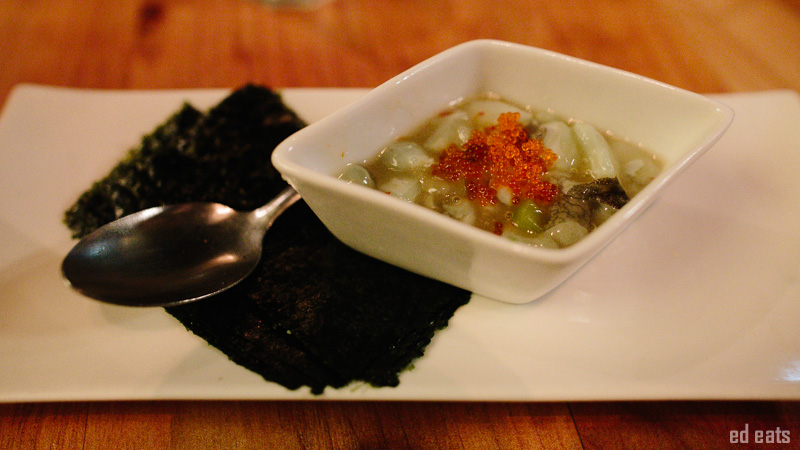 First up for my drinking buddies and I was the tako wasabi ($3.80), which is chopped raw octopus and Japanese pickles marinated in a wasabi sauce. Yes, it looks sort of gross but it’s delicious, especially if you enjoy the flavor and sensation of wasabi. Even the raw octopus rookie at the table was going in for seconds. 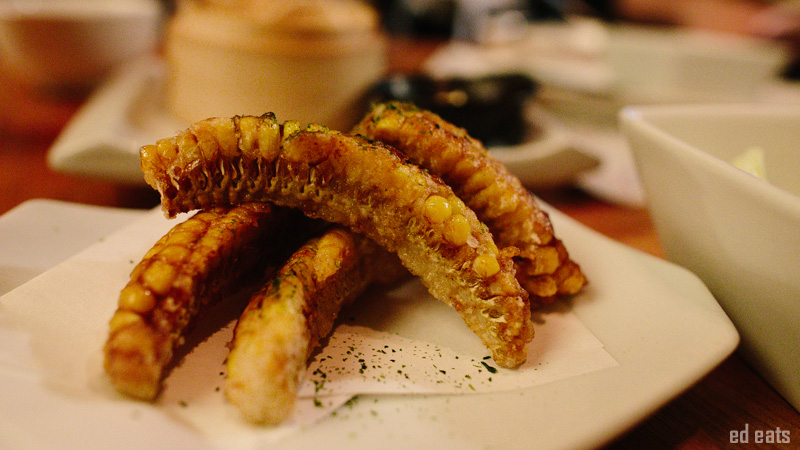 I don’t know who thought about quartering corn on the cob and deep frying it but this is genius. The corn karaage ($4.80) is quickly fried and dressed with a mix of soy and butter. It’s a familiar taste but a completely different texture…a really interesting take on corn. 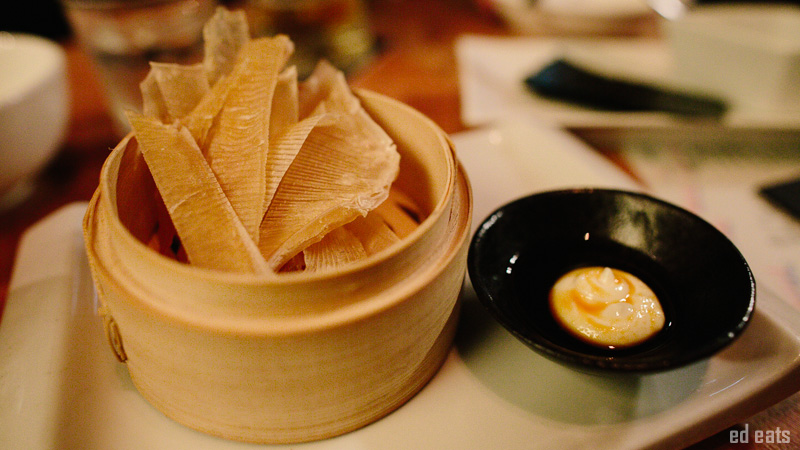 Another first for me was stingray, which I can’t recall having before. The aburi eihire ($4.80) is lightly seared strips of stingray fin with a chili mayo. It’s like a really tasty fish jerky and an absolutely perfect salty beer snack. 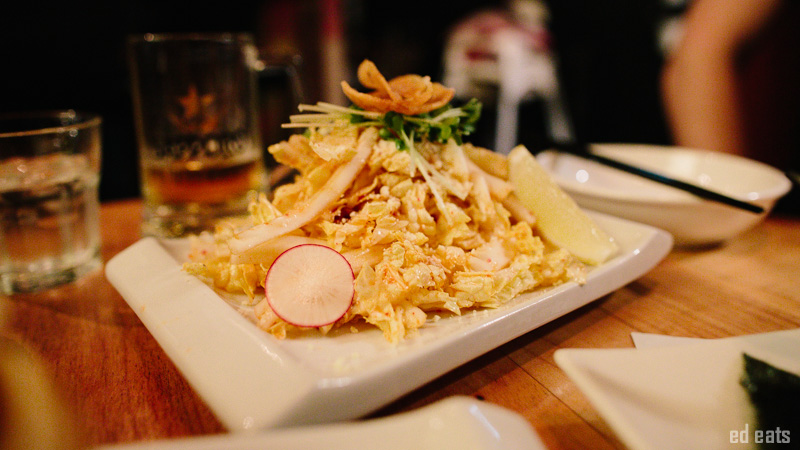 There were mixed reviews for the fresh kimchi caesar salad ($5.80) at our table. While my friends enjoyed the combination, I thought kimchi with Parmesan cheese was too weird for my tastes. No. Just no. 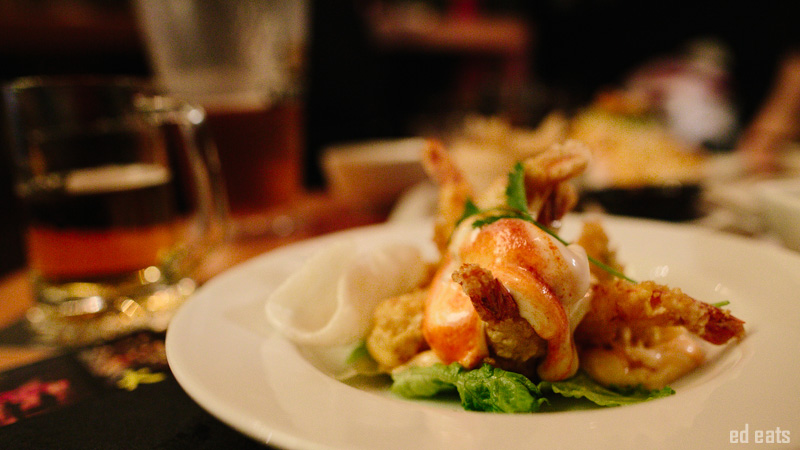 The *Y* ebimayo ($6.80) is about as familiar a dish as there is for izakaya food. Not one of the more exciting dishes of the night but you can’t go wrong with crispy, deep fried tempura tiger prawns with a dollop of chill mayo. Delicious. 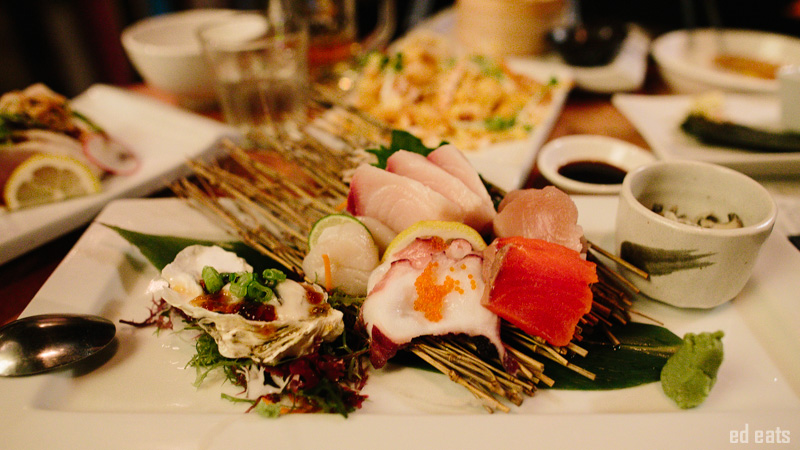 The menu says 5 kind chef’s choice sashimi ($19.80) but…I count seven different types of seafood on this plate, which is just absolutely beautiful, by the way. The snapper, scallops, octopus, salmon and tuna in the middle were top notch. I won the game of rock paper scissors for the oyster, which was lightly dressed with a wacky soy jelly and ocean-y good. The small bowl on the right contained bits of what our server described as “shellfish”. I thought it was whelk, chopped up with a soy dressing…another perfect salty beer snack. 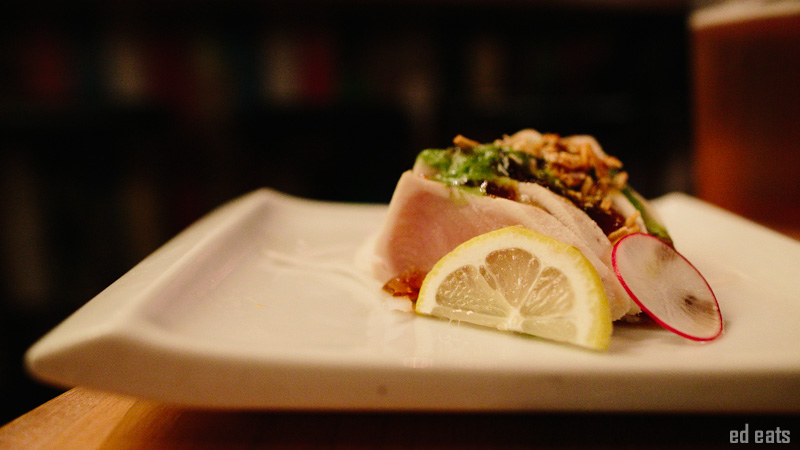 This is the tuna salt tataki ($6.40), which isn’t overly salty like the name would imply. It’s quite tasty but out of all the dishes on the table tonight, maybe not the one that you’d remember. 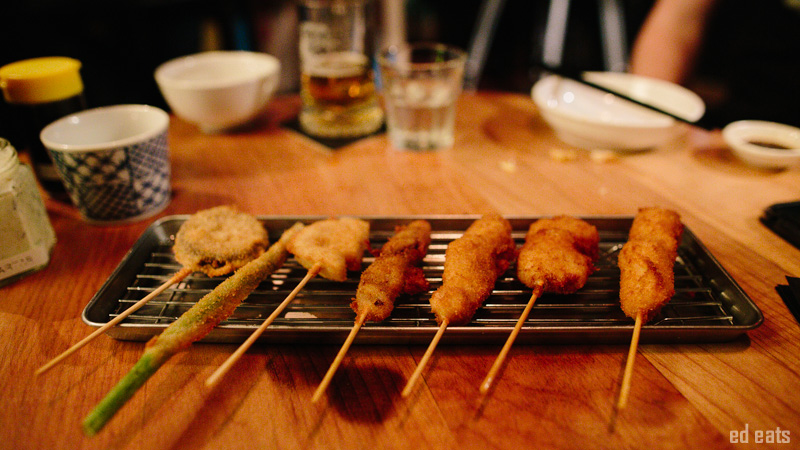 One of Rajio’s signature dishes is their kushikatsu, which, for lack of a better description, is battered, deep fried things on sticks. From left to right, you have shiitake mushroom, asparagus, lotus root, chicken, tuna and beef. They taste…well, they taste like things that have been deep fried and battered but I should note that everything is seasoned and cooked beautifully. I had the chicken skewer and the meat was glistening and juicy under that thin, crispy batter. 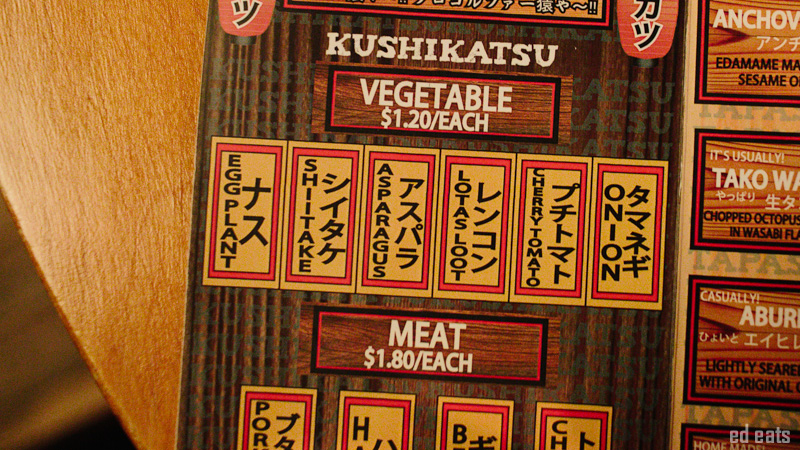 The lotus root is hilariously Engrished on the menu. I ordered the “lotas loot” on a whim and didn’t figure it was “OHHHHH…lotus root.” until it hit the table. 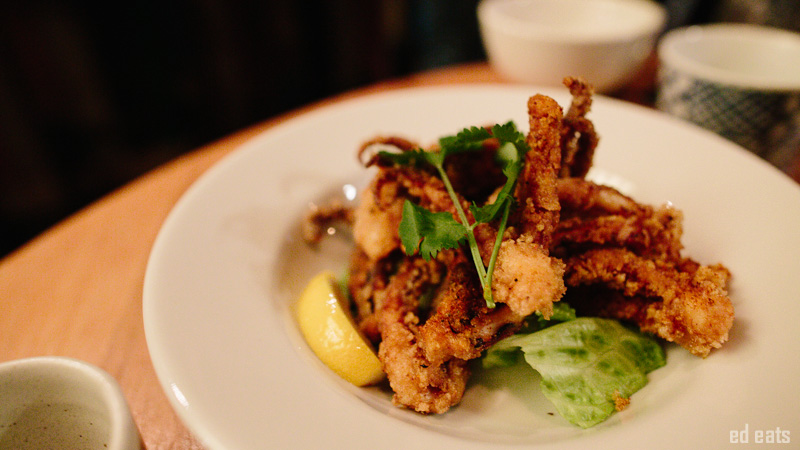 Yes, many of the things on Rajio’s menu are fried but I didn’t feel like anything was particularly oily. This ika geso age ($5.80) was on the daily special menu. The squid tentacles are lightly battered and deep fried to crispy deliciousness. Slightly under-seasoned…I could’ve really used some more kick with the batter. Nothing an extra shake of spice can’t fix. 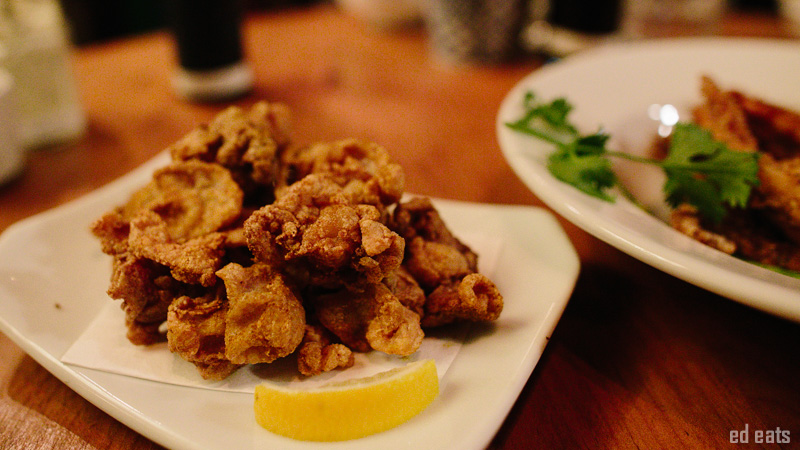 Same with the deep fried chicken knees, or nankotsu karaage ($5.80). They’re not actually “knees” but bits of chicken cartilage. They have a nice crunchy texture, like all the best parts of fried chicken in tiny bite-sized morsels but like the squid, a bit more seasoning is needed for a little extra pop. 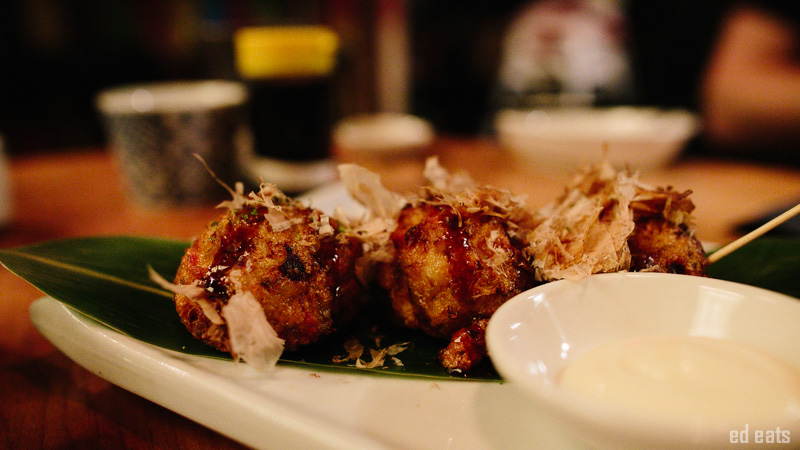 I can’t remember what these are called on the menu but they’re basically fish cake “takoyaki“. They have a much firmer texture than regular takoyaki but like takoyaki, they’re best absolutely piping hot. 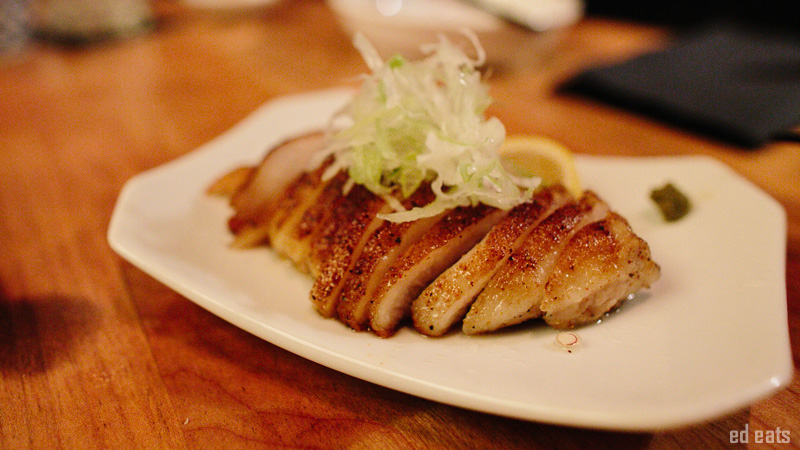 Coincidently, the best dish we had all night was the one we ordered last. This is tontoro yaki ($5.80), a grilled pork cheek with shredded onions and yuzu kosho, a citrus-y dressing. 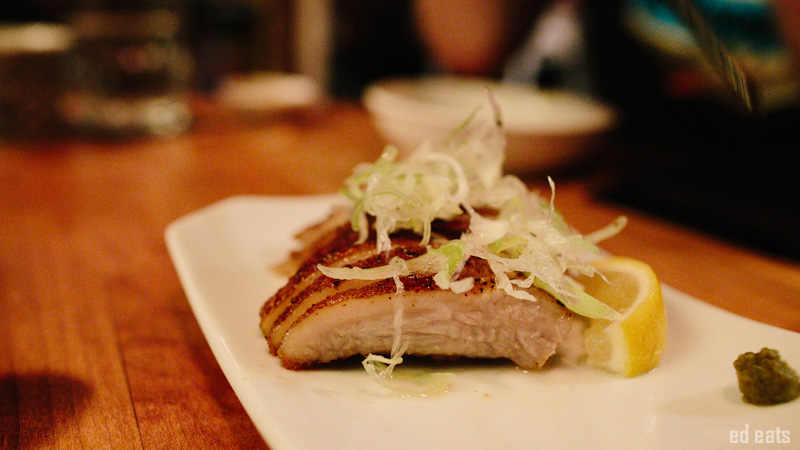 This is such a great piece of meat and cooked to perfection. The fat melts into the meaty bits and the result is an amazingly tender slice of pork just full of flavor. That little green dot is a finely ground hot pepper paste that really enhances the flavor of the pork cheek but be careful, it’s seriously hot. If you visit Rajio, you have to order this. 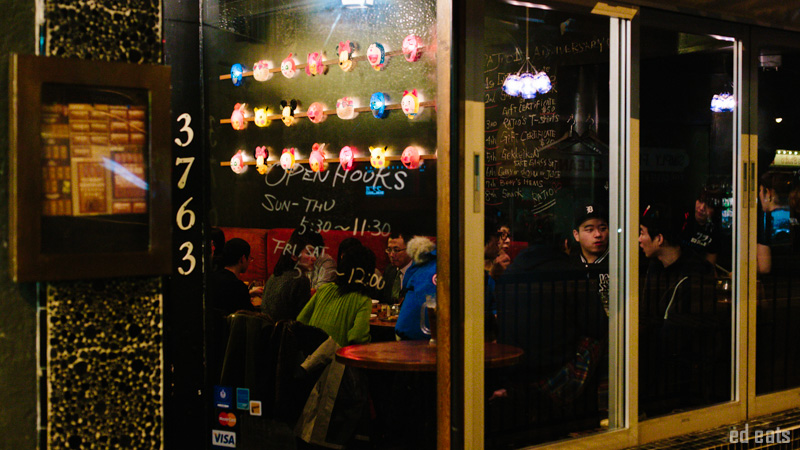 Rajio hasn’t gotten as fancy and experimental as some of the other Japanese izakaya restaurants about town but they’ve managed to be quite creative with what they serve. There were several dishes on the table that I’ve never had before and with the exception of the eccentric combination of kimchi and Parmesan, everything I ate was delicious. Although the menu is full of very inexpensive items, they add up quick and ordering more beer without more things to nibble on just seems wrong.

I had a great time at Rajio. I loved the atmosphere, the service was attentive and pleasant and most of all, the food was excellent. It’s down to earth and simple but creative and a little quirky at times. The small plates are great for sharing and a lot of fun since you get to try a lot of different things. Grab your drinking buddies, head to Rajio and order a biru pitcher or three to go with your grilled pork cheek.