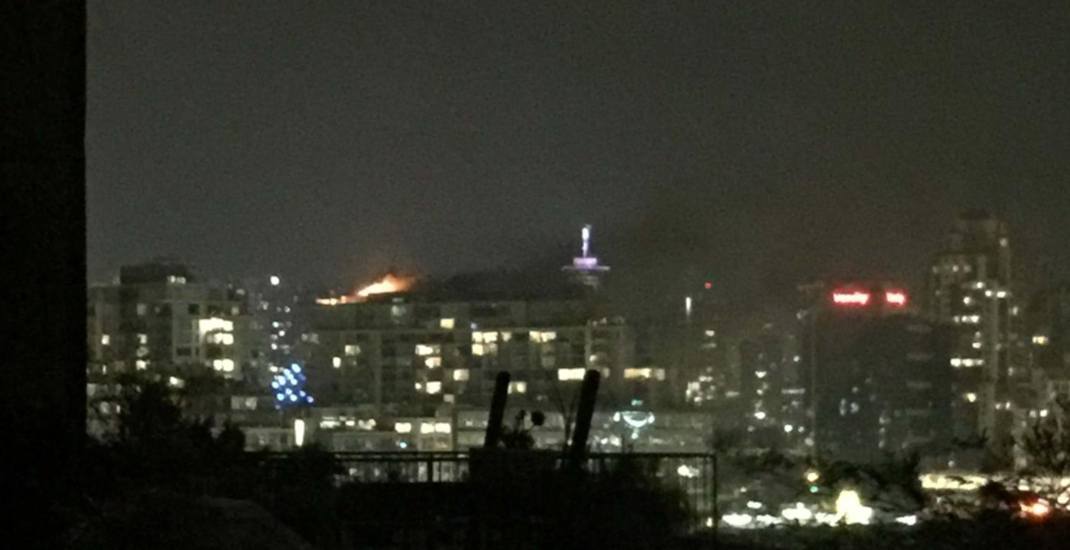 If you’re smelling smoke around Vancouver tonight, this is why.

Just after 11 pm on Sunday night, Twitter was abuzz with the smell of smoke in the air – but the cause was unknown.

Now it looks like we’ve found out where it’s coming from.

Reports online suggest the fire was near the rooftop of a building on Quebec Street near Terminal (close to Main Street-Science World SkyTrain Station), though officials have yet to confirm this.

Reactions to smelling the smoke are coming from all around Metro Vancouver, including the North Shore, Burnaby, and Richmond.

Caught this view of a building #fire from our balcony in #eastvan #vancouver #yvr @VanFireRescue pic.twitter.com/hHKnJITpVM

Went out about 5 mins ago. pic.twitter.com/M0AcHVM9AZ

Can anyone else smell smoke / fire in #Vancouver right now? I’m downtown and it’s strong all of a sudden.

Yes, in Mt. Pleasant and started smelling it quite strongly inside my apartment about 20 mins ago

Same here in south false creek near the Cambie bridge. All of a sudden…boom. Major smoky smell. Wtf?? Anyone know what’s up??

Fire truck was near 1st and Quebec, sounded like a fire on the roof of a building there.

Very smoky in Yaletown all of a sudden.

Near kits beach, very smoky and smell of a bad fire with toxic materials.

Very strong smell of smoke in the UBC area

I smell it down at the PNE earlier i still smell it near nanaimo area.

Lots of smoke smell at 33rd and Fraser.

Just got a whiff in North Van!

Im smelling it all the way in North Burnaby!

In #NorthVancouver and smell smoke. Started here about 20 minutes ago.

Yes I’m in Joyce Station and I smell it

Can smell it here in the West End

Smokey smell near 59th and Oaj

Can smell it on Fraser & King Ed

I could smell it on 33rd and vic

Near kits beach, very smoky and smell of a bad fire with toxic materials.

At broadway and Alma can definitely smell it

Lots of smoke smell at 33rd and Fraser.

More to come as this develops…