Chandra-Herbert told Vancity Buzz he has heard from a number of sources in the community that the government is preparing to renege its St. Paul’s Hospital plans and the downtown hospital city block could be demolished for condominium developments.

“I’ve just heard it from too many people now to dismiss it and the fact that the government won’t deny the case tells me all I need to know,” said Herbert last Thursday.

“There is no good reason to break the promise and betray the promise of the people in downtown Vancouver. But unfortunately, it appears that they are preparing to do just that.”

“We are continuing to work with Providence Healthcare on the best way to revitalize the hospital for the communities it serves. We must make sure that this fits within the future long term vision of health care in the region and across the province, focusing on more comprehensive community services and a partnership between Lower Mainland hospitals.”

However, the MLA asserts that the government’s statement is vague and ambiguous: “The non-denial denial they have issued tells me everything I need to know. If the minister is truly committed to rebuilding on site, he would say so and he hasn’t.”

With all that said, what would a new hospital at the False Creek Flats near SkyTrain’s Main Street-Science World Station look like? How would it compare with the plan to renew St. Paul’s Hospital on Burrard Street?

In 2004, an 18.5 acre parcel of vacant land immediately north of the Pacific Central railway train station near Chinatown was purchased by the Vancouver Esperanza Society – a non-profit group with close ties to Providence Healthcare, Vancouver Coastal Health and the B.C. Liberals.

Since the purchase, the province and Providence Healthcare have paid $800,000 annually in property taxes to reserve the site for a future hospital. The site was used by VANOC as a bus depot and vehicle security screening area for the 2010 Olympic Winter Games and PAVCO utilized the site as a construction staging and storage area for the 2010-11 B.C. Place Stadium renovation.

The False Creek Flats site is nearly three times larger than the existing 6.5 acre hospital city block site on Burrard Street about three kilometres away. It is also a short walk from SkyTrain’s Main Street-Science World Station and a number of major north-south bus routes that run along Main Street.

Furthermore, the site is located at the eastern end of the Georgia and Dunsmuir viaducts, providing emergency vehicles with a quick and direct access to and from the downtown core. But this arterial route could be lost if the City of Vancouver decides to demolish the viaducts for parkland and development. 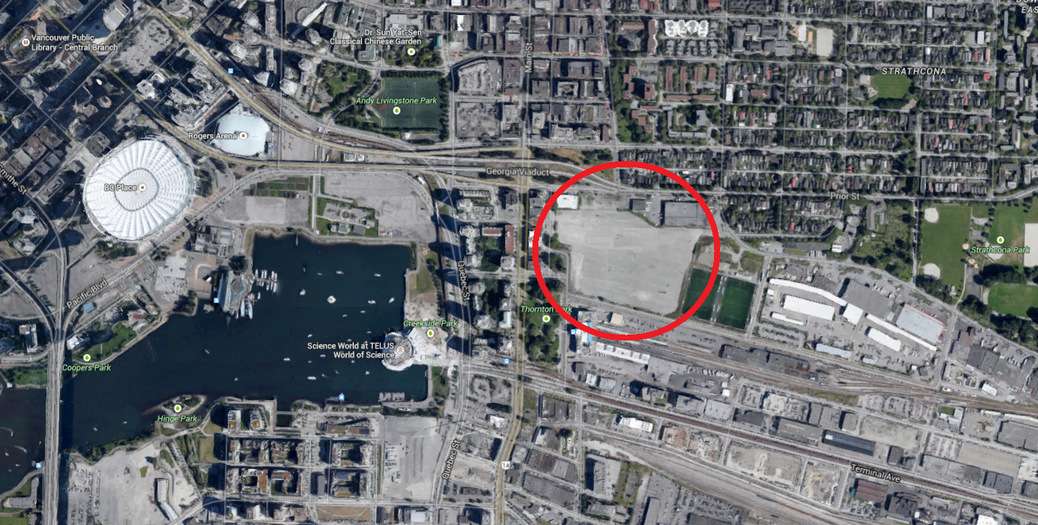 West End residents have been the main opponents of the closure and relocation of St. Paul’s Hospital, arguing that the existing centrally-located site on Burrard Street serves the needs of the growing and dense urban core. More than 100,000 people live in the downtown peninsula and that figure is slated to rise to nearly 150,000 in the decades to come.

While there is no question that the hospital serves the needs of downtown peninsula residents, Providence Healthcare data indicates St. Paul’s Hospital also plays a major regional public health role as about 40 per cent of St. Paul’s Hospital inpatients are from outside of Vancouver.

A new hospital on the eastern edge of the downtown peninsula could also better serve residents living in the city’s eastern neighbourhoods, although this is countered by the likely closure of Mount St. Joseph Hospital two kilometres away on Kingsway near Main Street should the False Creek Flats plan be implemented.

Another area of concern for MLA Chandra-Herbert revolves around the potential negative impact on West End businesses should St. Paul’s Hospital be downgraded or closed.

On the flip side, the activity spurred by a new hospital at the False Creek Flats could help revitalize the Chinatown neighbourhood.

In 2006, it was estimated that it would take 15 years to fully revitalize and expand St. Paul’s Hospital at its current location without major disruption to day-to-day healthcare services whereas a new world-class, state-of-the-art hospital at the False Creek flats could be built and operational in five years.

Extensive and intrusive work is required to bring the 440-bed St. Paul’s Hospital to acceptable standards.

The facilities at the existing St. Paul’s Hospital are inefficiently laid out and scattered across numerous buildings. The original Burrard Building is over 100 years old and has a seismic drift capacity of just 10 to 20 per cent required by current building codes.

Of particular concern, only one building in the entire hospital campus is built with fire sprinklers.

The renewal of the St. Paul’s Hospital campus would be through the construction of a new 10-storey, 200,000 square foot building on the corner of Thurlow and Comox streets. A second building could be built at an adjacent site on the hospital city block, adding 540,000 square feet of patient care space.

The exact cost of the renewal option is not known, but previous estimates performed in 2008 pegged the project at approximately $1.6 billion – a figure that Chandra-Herbert believes is significantly inflated.

In 2012, Premier Christy Clark announced that the B.C. government would commit up to $500 million to help fund the St. Paul’s Hospital renewal project.

To contrast with a recently completed local hospital project, the eight-storey Critical Care Tower at Surrey Memorial Hospital boosted the healthcare facility’s bed capacity from 500 beds to 650 beds – an increase of 150 beds – at a cost of $512 million. It also includes a new emergency department and a separate pediatric emergency department for children. 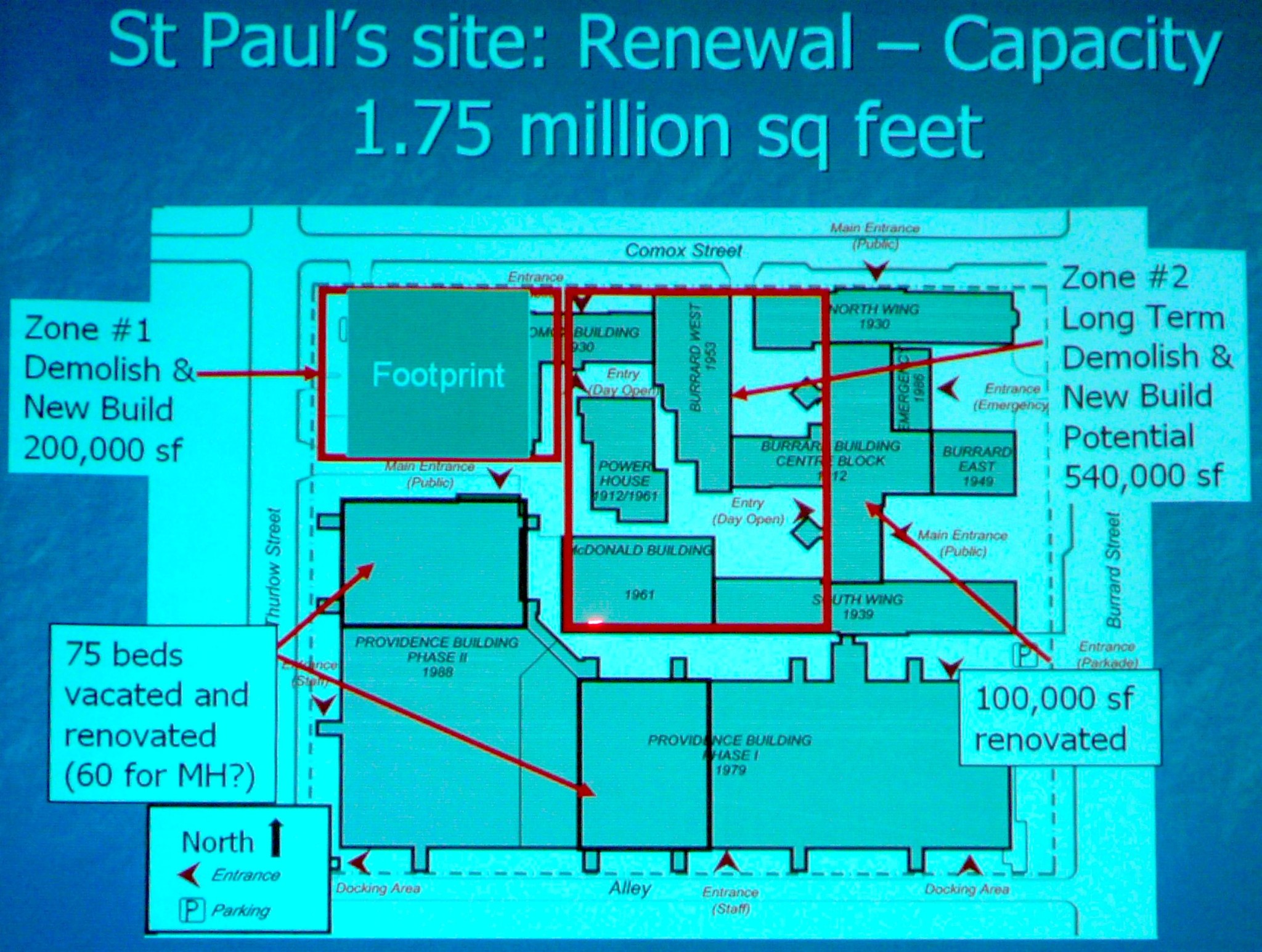 Providence Healthcare’s original plan in 2006 proposed maintaining a certain level of services at the existing hospital, likely within the Burrard Street heritage building after substantial renovations.

A portion of the Burrard Street site could also be demolished for market development to help fund the construction of the new health facilities.

Other innovations include a single Patient Intake Centre building at the hospital’s main entrance to consolidate admissions patient flows and improve efficiency with clearing patients prior to providing additional services.

Academic and research functions, focused on acute care and inpatient services, are to be housed in a single building on the southeast corner of the campus. Therapeutic services, invasive services and outpatient clinics are consolidated within the Centre for Ambulatory and Surgical Treatment building on the southwest corner.

All of these buildings are linked by the Patient Intake Centre building, the physical centre of the hospital campus.

As the False Creek Flats hospital site is nearly three times the size of the Burrard Street site, it allows for flexible expansion opportunities.

Proponents had also aimed to achieve a LEED Gold certification for the hospital campus by incorporating environmentally friendly elements such as the maximum use of natural light, low energy consumption systems, and natural air ventilation systems that reduce the likelihood of airborne infectious diseases.

Aerial views of the False Creek Flats hospital, with expansion possibilities depicted in the rear as faded buildings.