Nothing is more exciting than when you see a Vancouver entrepreneur start early and make a ripple outside North American borders. This week, Vancouver native Trevor Lai talks about his accomplishments with BOOMiGram, a new animation app that was featured by Apple during their first ever tour. Trevor started publishing books since he was 17 years old and has used his creative juices to create one of the fastest-growing family entertainment creative studios in China.

I’m the CEO and Creative Director of UP Studios, one of the fastest-growing creative studios in China dedicated to creating branded family entertainment. I’ve published more than 15 books since I was 17 years old, and it was always my dream to create cartoons and toys to inspire kids and kids-at-heart. We’re currently producing an animated series based on my character BOOMi, and our innovative new animation app BOOMiGram was featured by Apple in Greater China during their first ever tour. 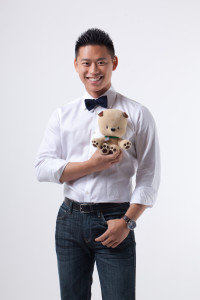 2. How does China’s startup culture compare to Canada’s and what things could we both learn from each other to improve?

It’s difficult to generalize, but there are two main startup cultures in China: one for expats starting businesses there, and one for local Chinese entrepreneurs. In general, there is less of an acceptance of the “fail-fast” mentality that is popular in North America. Most Chinese entrepreneurs, if they’ve decided to pursue a startup path, take it more seriously and are usually a bit more conservative in their decision-making. So, you could say that China’s startup culture could take more risks, while Canada’s could take more care with calculating risks to avoid a high failure rate. 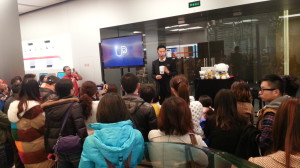 3. How has China and Vancouver’s rising startup communities played a role in the development of BOOMi?

I’ve benefited from growing up with a healthy balance of both mindsets I just mentioned above. On the one hand, I follow the North American tech scene closely, and its entrepreneurial heroes – Steve Jobs, the Google guys, Jack Dorsey – inspire me to take big daring risks, like building a company around the idea that BOOMi and other characters we create could become the cultural icons that Mickey Mouse and Transformers are for previous generations. On the other, seeing how early in development China’s entertainment market was, also spurred me on to start UP Studios and develop a very unique company culture. 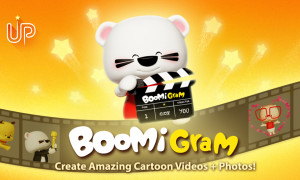 China’s 300 million kids need to be positively inspired. Stories and entertainment will play a large role in influencing them. China’s economic power is now well-established around the world. But its position as a cultural power, one that can influence the entertainment, technology and arts of other countries, is just beginning again in this modern era. Observers have called UP Studios a company that could become the “Disney of China” — meaning, a true creativity and innovation leader in the family entertainment business.

I started my first company at the age of 17 because I wanted to publish books that I had written and illustrated. I asked my aunt to buy my first entrepreneurship magazine at a Safeway when I was 12 years old, so I guess I always knew that I wanted to control my own destiny. The biggest challenge I faced when I was starting out was not letting early success blind me to the many huge improvements I needed to make to continue to be successful in the long-term. Luckily, I had some great mentors and family members to keep me humble.

I really look up to what John Lasseter and his partners did to establish Pixar as a modern-day giant, but I also spent a lot of time studying Walt Disney, who was truly an entrepreneur in his time. From producing the first major animated motion picture to Disneyland, he brought his imagination to life in a way I hope to with UP Studios. 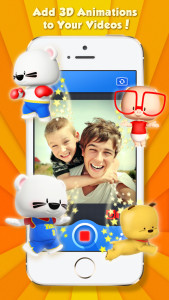 I admire Ryan Beedie and his contributions to SFU and the community; I think he would be a wonderful advisor in terms of responsible giving. I also think Brian Wong is doing some exciting things as a young entrepreneur, and as we also integrate apps into our entertainment ecosphere, perhaps there will be opportunities for us to connect in the future. 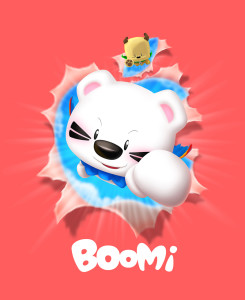 As Zig Ziglar said, “failure is an event, not a person”, so just learn from your mistakes and move forward. Be humble, stay true to your own dreams, and enjoy life more, you workaholic!

Books! Aside from reading a lot of books (Earl Nightingale, Sun Tzu, many more) and magazines like SUCCESS, I also listen to podcasts like Stanford’s free Entrepreneurial Thought Leaders series, which is free and features talks from Mark Zuckerberg to Jack Dorsey. 10. What’s your advice for current or future entrepreneurs? Create a strong centre of gravity. I enjoy mentoring young entrepreneurs, and often I meet a lot of them who are chasing after “what’s hot” and “what’s next”, instead of focusing on finding what their passion is and pursuing that with relentless execution. When you have a strong purpose, your gravitational pull attracts others and gives you even more momentum. BOOMiGram can be downloaded free here.

Create a strong centre of gravity. I enjoy mentoring young entrepreneurs, and often I meet a lot of them who are chasing after “what’s hot” and “what’s next”, instead of focusing on finding what their passion is and pursuing that with relentless execution. When you have a strong purpose, your gravitational pull attracts others and gives you even more momentum.

It’s rare to see someone run this far with a cartoon and it’s fantastic to see what Trevor has been able to do with the BOOMiGram brand. One can see how this sort of design would excel in Asia and only time will tell if he can grow it outside of those borders. When you have a company like Apple backing you, you know you’re doing something right.