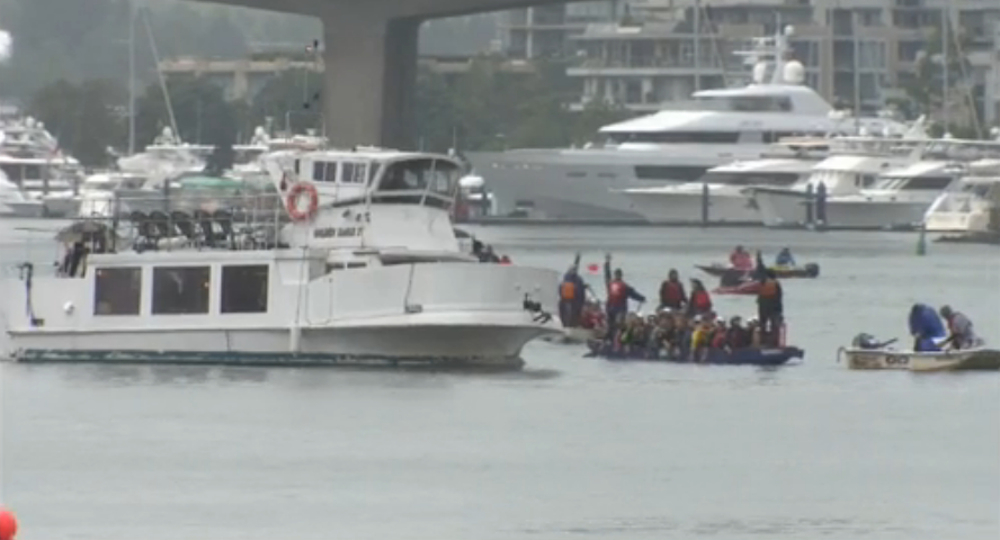 Participants, organizers, and spectators of False Creek’s Dragon Boat race were shocked yesterday when a large charter yacht veered right into the course during the middle of a major race, threatening the safety of those paddling in the water.

The incident, captured on video, happened at the end of Saturday’s race day during the Guts & Glory 2,000-metre women’s race involving 14 dragon boats travelling from Science World to the Cambie Street Bridge and then back. A yacht operated by Golden Eagle Boat Charters cut through the course – right into the path of several dragon boats – on its way to the Plaza of Nations dock.

Ann Phelps, the General Manager of the Canadian International Dragon Boat Festival Society, told Daily Hive that she was “appalled” by the incident, which she has never seen in her 26 years of dragon boating. Fortunately, no boats were hit and nobody was injured.

“The paddlers make a couple of turns so they were going down the Creek, and then from what it looks like the boat just came down and they were given the opportunity to wait on the side of the race course while the paddlers were paddling in the race,” she said.

“You can see how the race official has had to go up and you can hear the race official yelling and the starter yelling to stop the race. We have very good safety procedures so everybody stopped, and you could see the guests on his boat and they even looked concerned from what I could see.”

Dragon boat races in False Creek take place east of the Cambie Street Bridge, and for safety reasons the boats depart the starting position every 10 seconds. All of the boats in this competition are individually timed.

Phelps says most boaters do not mind waiting, especially since it is usually only a short two or three minute wait.

“Boaters are usually always really nice and they say they’ll wait because they are reasonable and human beings,” she said. “Just about all of the boat owners are really nice and would stop. They’re just out there having a nice time; of course, they’d stop and watch the race, wave us on and move on. So this is really a first.”

“If I had been on the water, my heart would have been thumping. You’d be scared of that. How can you feel safe? Does he not think he is not sharing the water with other users?”

All of paddlers on the dragon boats stopped paddling after the yacht operator decided to power through the course. The process to set-up the 14 boat race is complicated and time-consuming, and the race had to be completely restarted.

However, this is not the organizer’s first encounter with Golden Eagle Boat Charters. Several weeks ago, the yacht operator claimed that the paddlers were not allowed in False Creek – that the Dragon Boat Festival did not have a permit to use the waters, despite 2016 being the festival’s 28th year. One of the race officials ended up having to show the vessel operator their permit issued by Transport Canada to use the waters.

Earlier this month, the Society started a petition calling for Transport Canada and the City of Vancouver to stop boats from mooring in East False Creek, but after yesterday’s incident the petition is now asking for a complete ban on motor boats in the area.

Phelps also says that the video footage will be sent to the Vancouver Police Deparatment (VPD) to examine and address as the marine patrol boats were not in the area at the time and did not witness the incident.

Dragon boat racing at False Creek resumes at noon today, the final day of the three-day festival, and ends in the early evening with the Guts & Glory 2,000-metre mixed race.

Daily Hive has reached out to Golden Eagle Boat Charters for comment.

Video of the charter yacht trying to ‘join’ the Dragon Boat race: