Vancouver is no stranger to the momentum of its tech start-up community or the constant electric buzz around announcements like the arrival of e-commerce beast, Amazon. Step a foot outside of the British Columbian dashed borders and the conversations and excited banter calm to near whispers. “I love Vancouver, it’s one of the cities I most love to visit,” expresses Twilio’s Developer Evangelist, Carter Rabasa, “but I also think the developer and start up communities is totally amazing and sadly unappreciated outside of Vancouver.”

Having built successful events such as Cascadia JS, Rabasa decided to create the discussion of Vancouver’s booming IT community from outside its local borders. From his base in Seattle, Washington, Rabasa rounded up, fueled and connected a list of tech events, creating the first ever Vancouver Developer Week.

“I don’t care where you live now,” laughed Rabasa, “if you’re a developer and you’re considering moving to either the Pacific Northwest or Canada, I want you to think differently about Vancouver from what you’ve seen on Vancouver Developer Week.”

The potential results for the marathon of events featured in Vancouver Developer Week are riveting, one being the elimination of programming barriers that developers around the community would most usually face.

“The idea of a developer community is almost a kind of a false notion,” Rabasa explained. “Different developers use different programming languages, so if one person uses Ruby and another is using Python it’s actually possible that these two people will never meet in real life. One of the cool things about Vancouver Developer Week is that it will bring these people together. It doesn’t matter which tools you use, just come and meet awesome people.” 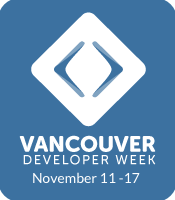 Where: Various, including UBC Robson Square and The Imperial

Seeing the first-hand growth in Seattle with his experiences at Microsoft, the parallels between Vancouver and its US counterpart are easy to draw. “In a lot of ways Vancouver is ahead of Seattle,” Rabasa emphasized. “Seattle has a lot of things Vancouver doesn’t. It has these anchor companies that elevate them literally in terms of economic might, but Seattle has a pretty fragmented developer community. It didn’t feel like there was a single person I could talk to, or a single website I could go to that had its finger on the pulse.”

With the likes of Launch Academy and the growing popularity around shared workspaces, creating direct interactions between new and small IT companies in and around the Lower Mainland, the interconnectedness of the growing community has an inevitable drive that connects the city like a vein.

“I feel like Vancouver is better, there’s a small number of people I can talk to and go ‘Hey! What are the high quality meet ups, where the developer focused events, when’s the next hackaton?’ I feel like the people have a better community to pull people together for events.”

With sponsors like Google and Unbounce, the confidence in the continuation of Vancouver Developer Week look clear. “Next year I would love to see 20 events and I think that’s totally possible,” Rabasa revealed. “It’s easy to imagine it being twice as big next year.”