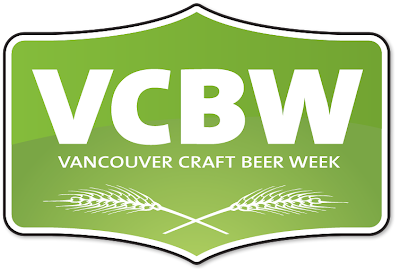 When I first heard about this event, I wondered why Vancouver didn’t hold such an event before. I also wondered if the acronym stood for VanCity Buzz Week, but obviously that doesn’t exist, yet.

Now I know what many of you are thinking, what is Craft Beer? Well let me enlighten you, Craft beer is brewed using traditional methods without improper adjuncts, such as rice or corn, resulting in a beverage with a distinctive, full flavour. Local pioneer breweries, such as Granville Island Brewing, reintroduced the concept of craft beer to B.C. Newcomers, like Central City and Driftwood, are building on that foundation and taking it to a wider audience.

Vancouver Craft Beer Week is a celebration of craft beer culture from May 10 – 16. Local craft breweries and establishments will team up to showcase the ever-growing craft beer phenomenon in our great city. Each day of the week will have a signature event, as well as multiple craft beer functions attended by international and local craft beer authorities. Signature events include the BC Beer Awards, Women and Beer, Homebrew Competition and Seminar, opening and closing celebrations.

Why have Vancouver Craft Beer Week? Although Vancouver has always had a strong craft beer culture, the recent explosion of consumer demand has resulted in a need for the celebration of that culture. Spurned on by the go local movement, more and more consumers have turned to craft beer as an alternative to mass produced products from major corporations. With this in mind the Vancouver Craft Beer Week organizing committee has set out to further the exposure of not only craft breweries, but the consumers, restaurants, and other businesses that support them.