In only its sixth year, Vancouver Craft Beer Week has cemented itself as the official kick-off to summer in the city. That’s an astounding achievement in a short amount of time. We sat down with Chris Bjerrisgaard, the VCBW Marketing Director to find out just what makes this festival such a popular event.

Vancity Buzz: Okay, first off, give me the VCBW elevator pitch for someone who may never of heard of it before.

Chris Bjerrisgaard: First and foremost, Vancouver Craft Beer Week is about fun. We have an internal question when we do everything, that being “Is this fun?” If the answer is no, then we don’t do it. We want to introduce craft beer to the masses and we feel the best way to go about this is making sure we provide broad appeal and a great experience for all attending.

This is the sixth year for the VCBW. How has the success of the festival changed it since the beginning?

Growth, lots and lots of growth. The first VCBW [closed] with a festival in the Heritage Hall on Main Street with about 150 people attending. Now we’re looking at a closing festival that could hold upwards of 10,000 people over two days. Needless to say that’s a major leap in a mere six years.

One of the fun things about the festival is the annual themes. Why lumberjacks this year?

The folks from Stihl– the saw company– approached us and wanted to see if they could put Timbersports as a part of our entertainment at this years event. Given our event location, the iconic PNE, where many lumberjack events have been held over the years we figured, why not? Half the brewers in the industry look like lumberjacks anyway so it could be a way to poke a little fun at ourselves. 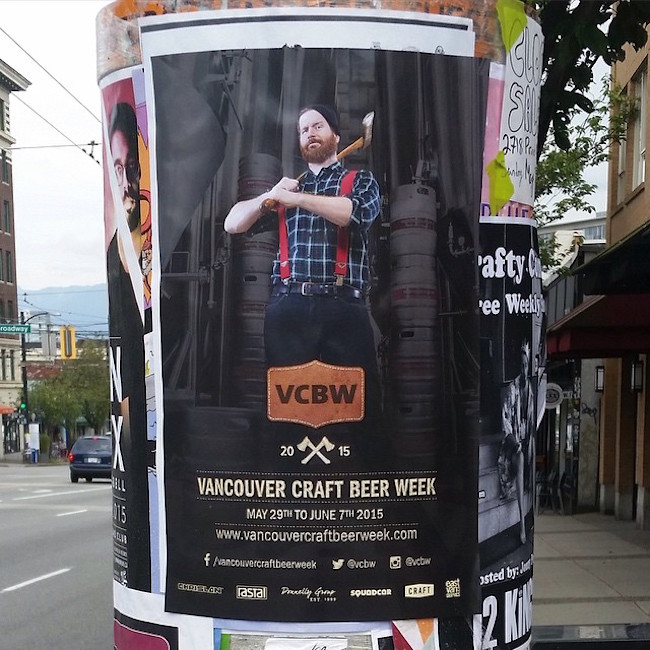 Every year there is a special brew made for the festival itself. What is this year’s beer?

The beer involved about 30 different breweries from around the province, with the main collaborators being Parallel 49 Brewing Company, Main Street Brewing, and the host brewery Red Truck Brewing. We chose a Kolsch as the base style because of the clean, crisp, approachable nature of the beer. Of course this being VCBW we chose to amp it up a bit with some hops that have tropical notes and a very subtle amount of cherrywood smoke malt to keep things interesting.

The week is more than just the main festival. What events are you personally most excited about this year?

A couple of events, namely GIGANTABIROOMCOBALTAPALOOZA!, Brothers in Hops, and of course the closing festival. GIGANTABIROOMCOBALTAPALOOZA! is a preview of where I see VCBW going in the future, with more music and food elements being incorporated into the events, while still maintaining a relaxed atmosphere. Brothers in Hops is always an amazing event with a massive amount of value and some of the best brewers in North America attending, and finally the closing festival is just the end all to beat all – biggest, baddest thing we’ve ever tried to pull off!

Why did you make the move to the PNE this year?

It’s hard to find the right venue in the city of Vancouver for a festival of this size. There are some venues that could work but the PNE was the only one that hit the mark on all counts. First off, they can accommodate not only the size we want to be this year, but growth in future years. Second, they can maintain our desire for this to be an outdoor festival. Third they have a lot of existing infrastructure and a great team to help us execute our goals. Finally it’s a historic venue that everyone from BC has probably attended at some point in their lives, and we’d love to be a part of keeping that going.

To be fair there have been some growing pains with the festival. One thing that’s been tough in previous years is getting food, with really long lines for food trucks, etc. Has that (and other issues) been addressed this year?

In the past we could never seem to convince enough food trucks to come out to the fest. For whatever reason many of them never understood just how big what we were doing was. Luckily this year, working with the folks at the PNE, we have nine food trucks attending the fest this year, up from the three we had last year. We figure a four-fold increase should be able to fix that. Like with the food trucks, each year we learn something and then address what we can. We’ve made a number of changes to take our game to the next level, like with every year.

Anything about VCBW you can share that people may not know?

I’m not sure a lot of people understand that the closing festival has a section sponsored by the US brewers association that will host a whopping 29 breweries, many of whom have never poured beer in Canada until our fest. If you want to try something new and exciting that is without a doubt one of the best kept secrets of VCBW 2015!

When: May 29 to June 7
Where: Various locations around Vancouver (see all events here)
Website: www.vancouvercraftbeerweek.com