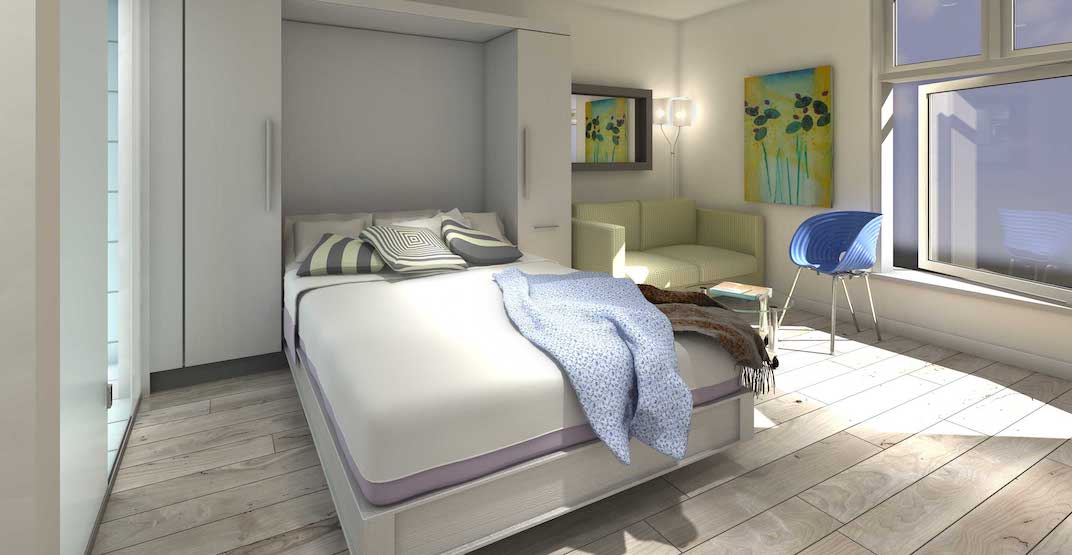 Interior artistic rendering of the micro lofts within the Burns Block in Vancouver's Downtown Eastside. Unit sizes are as small as 226 sq. ft. (Reliance Properties)

Condominiums in Metro Vancouver are rapidly shrinking in size, based on new data released by Statistics Canada.

“The wave of smaller condos kicks off an interesting trend in both cities. In the late 1980s, developers saw condos as a replacement for traditional housing. Units with multiple bedrooms were built, assuming people would raise families in them,” reads the report.

“Now single bedroom (sometimes less) are the standard. Record levels of construction mean this will help shape future demographics. Both cities are giving a loud and clear sign that the future in these places are to work – not build a long-term future. Toronto accelerating to build smaller units than even densely populated Vancouver means it’s vying for the number one spot to not raise a family.”

A number of factors are possibly connected to this growing trend of smaller condominium units.

While there is a demand for family-sized units, a growing segment of the younger population is choosing to delay marriage and the start of their families, which means there could generally be a lower demand for larger living spaces compared to just a few decades ago. Changing consumer trends are another factor.

Smaller unit sizes are also generally more affordable for young renters and first-time homebuyers, amidst the growing housing affordability issues in both cities.

Some recent municipal policies, such as those of the City of Vancouver, also allow developers to construct smaller units — as small as micro units — to create more affordable housing. For instance, the Rental 100 Secured Market Rental Housing Policy relaxes unit sizes to as small as 320-sq-ft, while the Moderate Income Rental Housing Pilot Program considers on a case-to-case basis unit sizes that are smaller than the city’s general standard of 398-sq-ft.