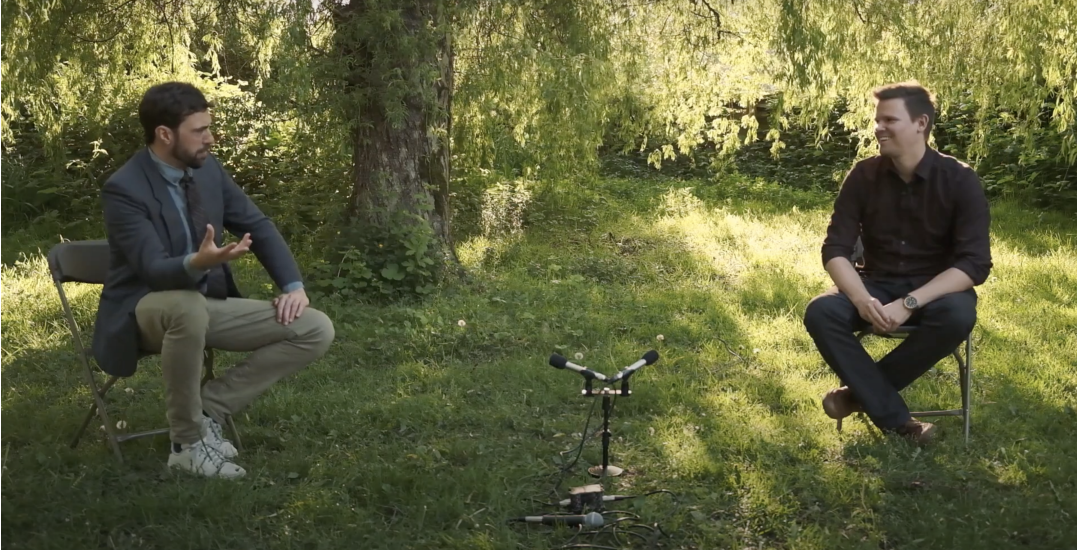 Once a week, local comedian Ross Dauk sets up his camera in a park in East Vancouver where he films comedians doing their stand-up sets in a park. What would usually take place in real life at Little Mountain Gallery in Mount Pleasant is now filmed, edited, and aired on YouTube the next day.

While the comedian is still writing and telling jokes, he’s now also filming, editing, and “trying to remove the Trout Lake crow caws from the sound recordings all in an effort to get out a good show every Thursday,” says Dauk.

Performing stand-up to a virtual crowd is a strange reality comedians have had no choice but to adapt to recently. Whether it’s been live-streamed on Instagram or filmed and uploaded to YouTube, according to the performers, it’s been pretty weird.

“COVID-19 has wiped out live stand-up comedy almost completely. Within one week, all local shows shut down and most road work was cancelled or indefinitely postponed,” says Dauk. 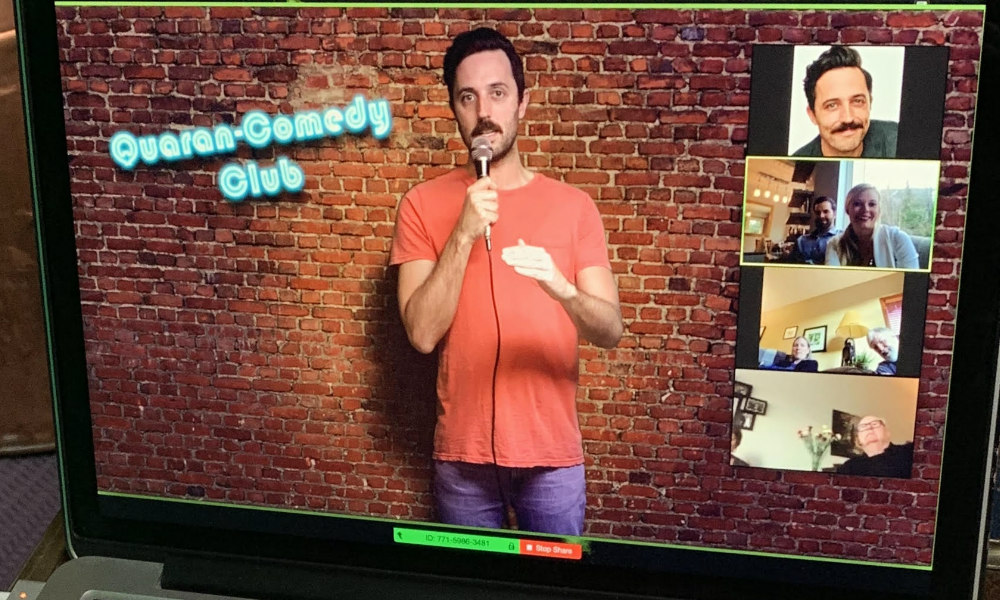 Long-running Vancouver improv show The Sunday Service, which has been hosting its improv show at The Fox Cabaret for over a decade, has also pivoted their show online to YouTube.

Her stagemate Mark Chavez says performing virtually was a difficult adjustment, especially at the beginning. “Getting into these little boxes and doing it just felt weird. I would leave the show and just be like I don’t know if that worked at all. [But] I feel a lot better about it now that I’m getting used to it.”

LA-based comedian Matt O’Brien, who came back to Vancouver once COVID-19 hit and has since been using his at-home green screen set up to turn his apartment into a comedy club, shares the sentiment.

“I’ve done a few streaming stand up shows. The first one felt so weird I stopped 30 seconds in and said I couldn’t do it and just talked to the host for six minutes,” O’Brien says.

Performing without a live audience isn’t just awkward, though. For comedians, “reading the room” and doing “crowd work” is key for a successful set. Knowing who it is they’re trying to make laugh is how stand-up comedians will choose certain material, and depending on their audience’s reception, how they pivot their approach on stage.

“Performing without an audience is a different skill that I hope to get better at. An audience can give you so much guidance. When it comes to timing, tempo, when to expand on a joke and when to wrap one up, there’s nothing better than the reaction from a live audience,” says Dauk.

To replace the missing physical audience, some comedians doing online comedy have opted to leave their audience’s mics on, but most find it too distracting to stop and read the chatbox.

During comedian Julia Hladkowicz’s recent set for a company, the host muted the virtual audience so there wouldn’t be any distractions. Hladkowicz came up with a creative solution.

“I got some information from the woman who hired me about some of the audience members and was able to do some fake crowd work. We then added a subtle laugh track and streamed the whole thing over Zoom,” says Hladkowicz. 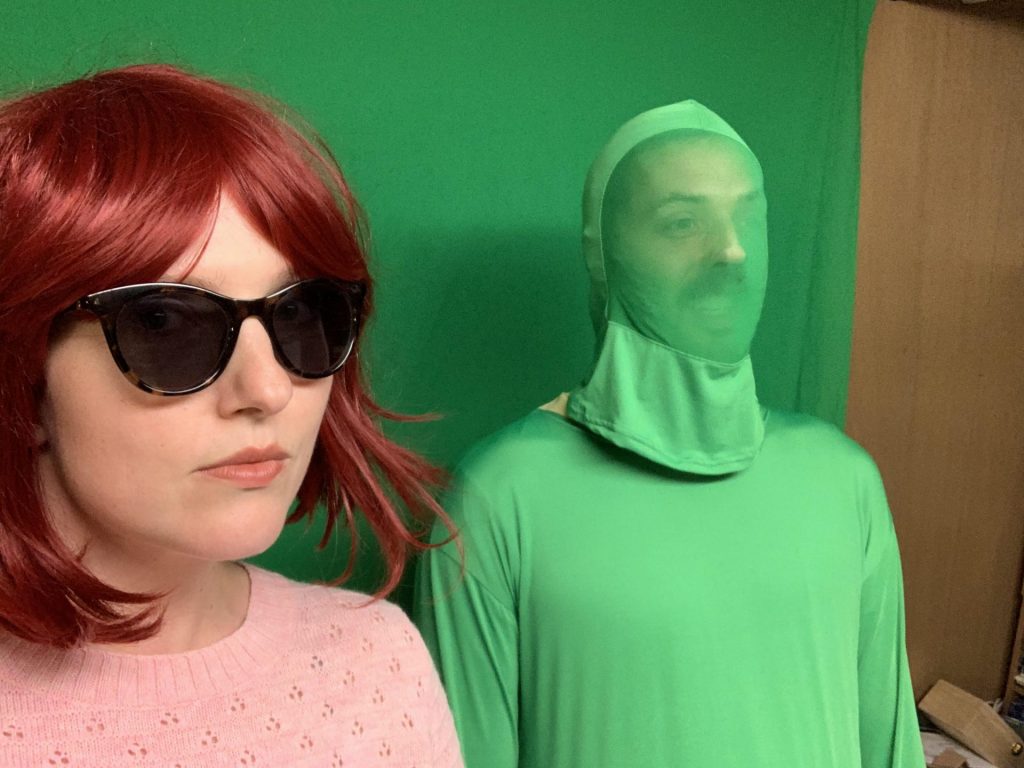 Apart from the awkward lack of audience interaction, performing from the confines of their homes (or parks) just doesn’t have the same energy as the stage.

Chavez of The Sunday Service says, “I feel like I’m at a meeting if I’m sitting at my desk doing improv. It feels awful. So I made a little standing desk and then last night I put up a new curtain. I’m doing anything I can to kind of get into my body more because I like to move around.”

Although losing their in-person performances has been a tricky adjustment for comedians, as more venues gear up to open up again, some say there have been certain benefits to switching online.

Hladkowicz says she’s made the most of the downtime to experiment creatively.

“Obviously there [are] moments where I swear at TikTok because I don’t understand why a teenager dancing has two million followers, but for the most part being in isolation has allowed me the freedom to try new things and play,” the comedian who has starred on The Comedy Network says.

In addition to enjoying seeing thousands of viewers log on every week compared to Fox Cabaret’s capacity of a few hundred, Chavez says that the convenience of not having to travel for work has been a bonus.

Fellow cast-member Ryan Beil agrees and says that although he can’t wait to see his audiences in real-life again, that there are things he’ll miss about being online. “I’ll miss the virtual backgrounds from time to time. They’re fun,” says Beil. 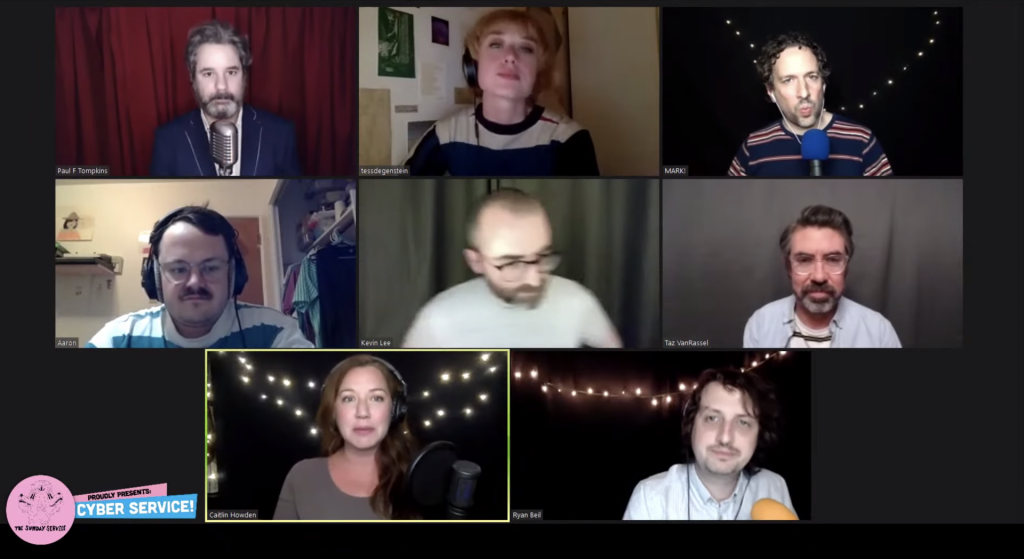 As event venues start to open up around the city, comedy shows won’t necessarily be business as usual; one of the things comedians are speculating that will have to change is professional hygiene.

“I think shaking the MC’s hand will no longer be a thing! We’ll fist bump or wave? It’s hard to say what live stand-up comedy will look like over the next year,” says Hladkowicz.

The comic adds that microphones are one thing that will definitely have to change if they’re to be shared. “When things get back to ‘normal’ I think I’ll bring my own mic to shows,” she says.

If you’re looking for ways to support your local comedy community right now, the Emergency Relief Fund for Canadian Comedians and other venues around the city are currently accepting donations.