It’s no secret that Vancouverites love their coffee, either hot or cold you’ll find a coffee shop on almost every street in the densest parts of the city. This map, created by BTAworks, explores the patterns of coffee spots in the City of Vancouver.

Using business license data from the City of Vancouver’s Open Data catalogue, BTAworks mined, analyzed and mapped the locations of the major coffee chains in the City. This map does not include independent chains and bubble tea houses. That map will be made in the near future.

Looking at the map/data, Starbucks has the largest number of retail outlets at 85. It is followed by Blenz Coffee and Tim Horton’s at 26 locations, JJ Bean at 11 and Bean Around the World and Waves both coming in at 10 outlets. To round up the coffee chain analysis, Take 5 Cafe has eight locations and Cafe Artigiano has seven. 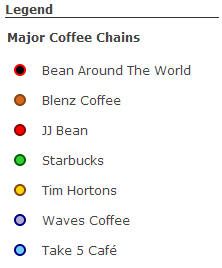 One interesting tidbit, the suburb of Surrey has only 18 Starbucks stores, but 22 Tim Horton’s. This highlights the differences in the kinds of people that inhabit both cities.