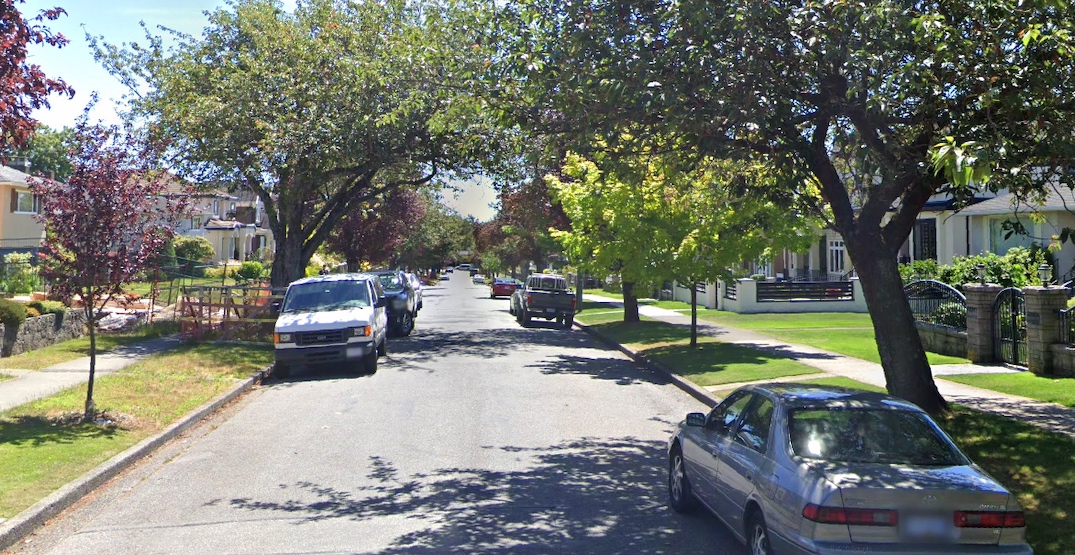 Example of a residential street in a single-family neighbourhood in Vancouver. (Google Maps)

Residential parking permit requirements could be expanded to all residential streets, based on a new proposal by City of Vancouver staff.

This recommendation that will be presented to city council next week is amongst a list of major strategies that are part of the city staff’s new proposed Climate Emergency Action Plan (CEAP).

If approved, parking permit requirements would be expanded to every residential street across Vancouver starting in 2021.

Currently, beyond the downtown Vancouver peninsula, residential streets with mandatory parking permit requirements are generally located near employment areas, such as retail districts.

Annual parking permit fees currently range between $41.32 for residential streets outside the Metro Core to $393.27 for the market rate in downtown Vancouver’s West End. The non-market rate in the West End for low-income households is $82.67.

The rate is currently higher at $61.02 for the residential streets near and within the Vancouver General Hospital campus.

The parking permit prices will initially be set “low” to offer residents an adjustment period. City staff state their long-term aim is to create a market-based parking permit program “where the price of a permit fluctuates based on supply and demand with considerations made with respect to income, disability, and other equity-focused factors.”

“Today, nearly one third of space on city streets is dedicated to parking. This sizeable portion of street space is only available for use by households with vehicles. For the more than one quarter of households in Vancouver that do not have a vehicle, it is providing little value,” reads a city staff report.

“Additionally, the majority of on-street parking is either free for use or severely underpriced relative to its value to the overall community and is neither reflective of the parking demand for the space nor the potential of the space to be re-prioritized to serve transit, walking, cycling, or additional public space.”

Under CEAP, the city is also moving to eliminate parking minimums within newly constructed buildings across the city and establish “modest parking maximums,” which includes protecting the supply of accessible stalls. By allowing new developments to build fewer vehicle parking stalls, this policy is intended to be another municipal tool to discourage car use and encourage travel by public transit, walking, and cycling.

Eliminating parking minimums could also reduce the cost of housing, given that developers pass on the cost of providing parking to homeowners and renters. According to the city, each underground parking stall can cost up to $50,000 to build, and there are also added emissions from the amount of concrete used.

City staff state the elimination of parking minimums should be performed in conjunction with the citywide parking permit requirement, as “there is a strong potential for new residents to use nearby free, unregulated parking to store their vehicles.”