If I were Alain Vigneault for a day, I’d put a lozenge in my mouth, tell Aaron Rome I love him, and give the team the following impassioned speech prior to tonight’s game:

Alright boys, enough is enough. We got to the top of the standings for a reason, and we haven’t been showing it lately! This is bull-crap and it needs to stop now!

We secured an 11 point lead on the conference so that we could coast into the playoffs, not play hard! We’re supposed to be resting down the stretch, not getting tired and injured!

So here’s the deal: if I see one blocked shot tonight – Ryan, I’m looking at you here – you’re benched. If I see any of you skating your ass off – Jannik – you’re done for the night. And if anyone so much as thinks of throwing a hit… boy, you better enjoy watching games from the press box.

In closing, team, let’s go out there put ’em to sleep! If you really want to win, get the puck a to Sedin and retreat to your own end.

For those of you who want to see some effort from the Canucks tonight, just be thankful I’m not the coach.

For a large majority of this season, Jannik Hansen was the unsung hero of the Canucks, but since February, fans started to realize that he does everything asked of him, and he’s damn good at it.

Tonight, Hansen will be taking a shot at filling the third-line centre spot. Why Hansen? Well, he tirelessly skates miles every game, he’s extremely defensively conscientious, and he wins almost every puck battle he enters into. Basically, all he needs to do is learn how to take face-offs.

Perhaps the void-filler the Canucks have been for searching high and low was sitting right there in front of their eyes the entire time.

The Preds are on a 9-game winning streak, and it hasn’t been due to a weak schedule. No, it began with them beating Boston and Detroit and includes wins over Anaheim and Dallas as well.

They continue to show why they may be a very tough to overcome obstacle once the playoffs begin.

If you like high-paced, end-to-end hockey… don’t watch this game. All season long, everytime the Canucks have met the Predators, people seem to be surprised by the “boring” games.

That’s just the way Nashville plays, and it works for them. And just like a bad movie (eg: Ironman 2), you’ll have to sit through hours just to see how it turns out.

On Saturday, the Kings lost their best player, Anze Kopitar, to an ankle injury for an indefinite period of time. With only 7 games remaining, the team could easily slip from 4th in the Western Conference to 8th (they’re only 2 points up on the ‘Hawks) becoming the Canucks first round matchup.

Bad for them; good for the Canucks.

They’ve lost 9 in a row and they’re the worst team in the league. Man, the Oilers are good… at draft pick acquisition.

Here’s a very good reason to watch: the Oilers have allowed the second highest goals against in the NHL, so if ever Daniel Sedin were to make a strong push for the Rocket Richard trophy and to cement his hold on the Art Ross, this would be the night. Watching the Sedins skate circles around the children in Edmonton could be fun. 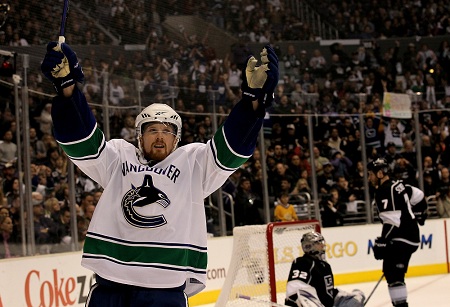