It almost feels like the Canucks haven’t had a 5 day break between games with all that’s happened since the last one. Daniel Sedin and his wife Marinette delivered their third child, Anna Sedin, on Tuesday morning.

And of course Canucks Nation was rocked a day earlier by the sobering news that Manny Malhotra will be out for the rest of the regular season and playoffs.

The Red Wings are sitting 4 of their top players for this game – Todd Bertuzzi, Pavel Datsyuk, Johan Franzen, and Jiri Hudler. Coach Babcock on Bertuzzi’s injury:

“He’s had aches and pains for a while and just can’t go.” (from ESPN.com)

Yikes, aches and pains! Hands down one of the toughest injuries to overcome… just ask your grandparents. 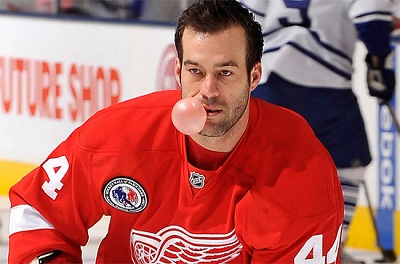 maybe he’s got a toothache

Right, the Red Wings are obviously in coast mode heading into the playoffs. If the Canucks didn’t have a very limited time to figure out their forward lines without Manny around, I’d say they should be doing the same. But, given the circumstances, maybe it’s a good thing to have a few exhibition games to figure out some chemistry, as it appears that only 1 of the 4 forward lines is set.

Based on the skill and quick attack offence employed by both teams, this should be another exciting one, and compared to the other two matchups of the week, it will almost certainly be the game of the week.

The Thrashers are 9 points out of 8th spot with 10 games remaining in the regular season. Really, it’s a waste of time discussing their playoff hopes at this point, but I bring you this line from the Atlanta Journal Constitution’s, Chris Vivlamore:

If Thrashers fans believe this can happen, they’re delusional, right? Actually, I’m the delusional one, suggesting that they have any fans.

Poor Columbus, having lost 11 of their past 13 games, they have simply played themselves out of the playoffs.

That’s sad. But with 77 points, 8 points below the bar, even sadder is the fact that the team is on it’s way to it’s second best record in franchise history, according to the Columbus Dispatch 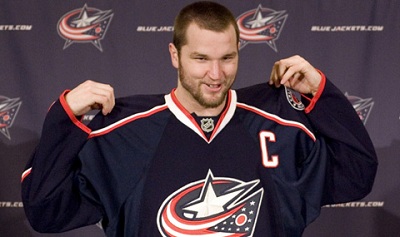 the day the life sentence began