On Saturday, we found out that Ryan Kesler has been named as one of 4 alternate captains for the NHL All-Star Game.

Also named as alternates were Martin St. Louis, Patrick Kane, and Mike Green. Seeing the names made us at HTTN wonder what actually went into the selection process for these alternates… so we put HTTN’s research team on it. As usual, they haven’t disappointed, and they managed to dig up a recording of the conversation between Brendan Shanahan and Rob Blake, where they made their decision:

Shanahan: Rob, I’ve been thinking that we should name 4 alternates to help the captains draft their teams

Blake: Oh really? I guess we should discuss the pros and cons of the idea and make a decision on it.

Blake: Oookay then… how will we decide who gets to be the alternates, or have you already made that decision too? Hahaha.

Blake: What? Okay… who are they?

Blake: Well that makes sense. Kesler has been having an amazing year for Vancouver, and Kane is one of the most exciting players in the league and he won the Cup last year. Good choices! Who else?

Blake: Oh yeah, St. Louis has definitely earned it, he works so hard year in and year out, and, wait, what? Mike Green? But why?!

Shanahan: I just think he’s such a cool defenseman. He scores so much and never worries about playing in his own end. And he rides around on that Vespa. He’s just so cool.

Blake: But Brendan, he’s having a horrible year! He’s scored 22 points, and he’s only on pace for 43! Last year he had 76! Surely there are others more deserving?

Shanahan: No, I don’t think so. Green is cooler.

Blake: But it’s not about who’s “cooler”!

Shanahan: Look, we’ll just have to agree to disagree on this one.

Blake: What does that mean?

Shanahan: Well, I have the final say, so he’s the alternate captain.

Blake: I feel like this whole conversation was a waste of time, Brendan.

Shanahan: Rob, you should be calling me sir. I’m the head of this committee, you’re here to give me advice.

Well, now that we’ve been enlightened on that, let’s preview the Canucks’ games this week:

About a week ago, Blake Price stated on his Team 1040 radio show that he’s not convinced about the Dallas Stars, and that their success this season is coming through smoke and mirrors (3rd in the Western Conference).

Don Cherry had quite the opposite to say right before Saturday’s game between the Canucks and the Flames:

“I’ll tell ya right now, Vancouver, you better get ready for Monday, because that’s going to be a dandy. Dallas is great on the road.”

Cherry also said, “Blogs. What’s a blog?” So I guess he’s not going to be reading this.

He should be, though, because we agree with him (sorry Blake). Dallas, led by Brad Richards, Brendan Morrow, and Mike Ribiero, is a very strong team and they will certainly be one of the massive hurdles for the Canucks to surpass in the West come playoff time.

Last week, on the same night that Henrik Sedin pulled the Peter Forsberg move on the Sharks, Jamie Benn pulled the exact same move it for the Stars against the Oilers. Keep an eye on him for some niftiness around the net. 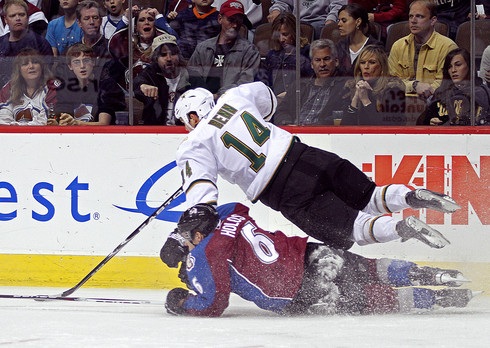 Speaking of smoke and mirrors…the Predators are only 3 points behind the Stars and they sit in 4th place.

Unlike the Stars, they have no Brad Richards. In fact, their highest scoring forward is Patric Hornqvist, with 27 points through 44 games! They’re ranked 19th in the entire NHL for goals scored, yet in their last 12 games, they have only 2 losses.

Just give Barry Trotz the Jack Adams Award right now, he deserves it.

Watch Ryan Suter. His 11 power play assists defy the “we don’t need to score to win” logic that the Preds operate on. 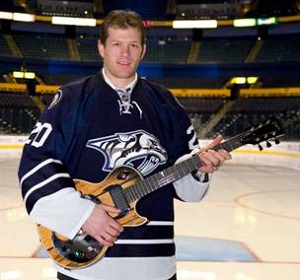