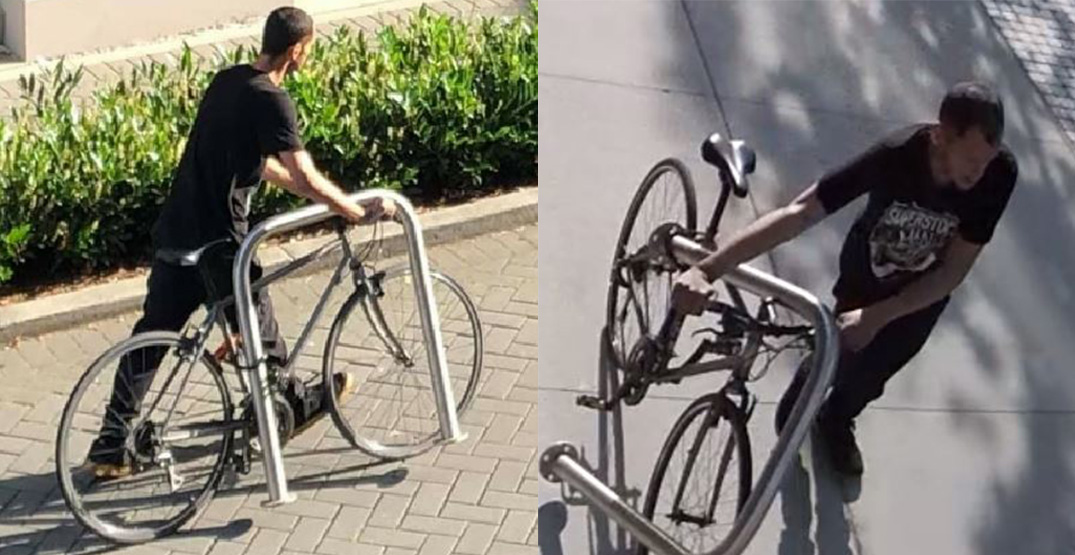 One very determined alleged thief wasn’t going to let something as trivial as a bike rack and lock stop him from getting what he was after.

According to the Vancouver Police Department, a bike theft occurred in Olympic Village on August 19.

While little information about the bike or the suspect has been released outside of a couple of photos, in this case, those pictures tell more than a few words.

In the photos, the suspect appears to be a slim, tall, white male, wearing black pants, and a black graphic T-shirt, with brown hair. He’s seen pushing an unidentified bike down the street.

Attached to that bike also happens to be an entire portion of a bike rack that is usually screwed into the concrete.

While his identity is unknown at this time, the real mystery is, since he doesn’t appear to be carrying any tools, how did he get the rack out of the ground?

Anyone with video or information about the incident is asked to call the police at 604-717-3321.

#VPD are investigation a bike theft that occurred in Olympic Village on August 19. Investigation is ongoing and we are asking for the public’s help to identify the suspect. Anyone with video or information of the incident, is asked to call VPD non-emergency line at 604-717-3321. pic.twitter.com/VVSTEXqG7z