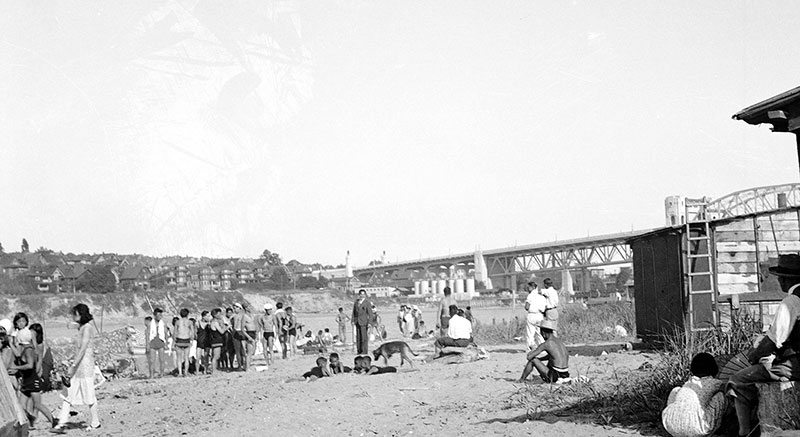 With summer in absolute full swing in Vancouver, we thought we’d supply you with some beach reading.

The following are little known histories of four Vancouver beaches. Two are long gone but worth remembering, and the other two remain the most popular beaches in town. 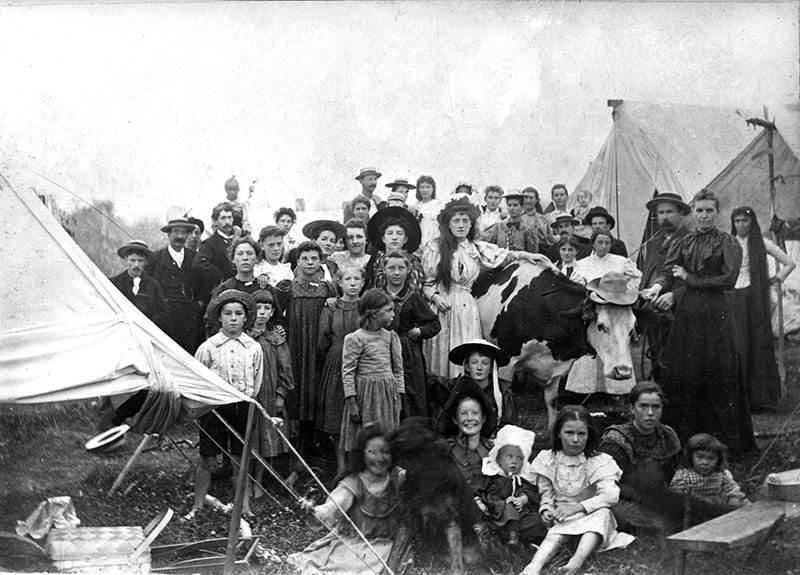 Group from Mt Pleasant at Greer’s Beach, 1896. City of Vancouver Archives #Be P98.

Sam Greer bought 20 acres at what’s now Kits Beach in 1884 for $200, where he set up a small farm. Unfortunately for Sam, the property was included in the huge parcel of land offered to the Canadian Pacific Railway to entice it to make Vancouver the terminus of the transcontinental railway. Greer was branded a squatter, and the railway giant set out to evict him.

Greer fought tooth and nail to keep his property, including chasing CPR officials off with an axe, ripping up rail ties laid down by CPR workers, fortifying his property with barricades, and stockpiling weapons. The final showdown came in 1891 when Greer injured the deputy sheriff with a round of buckshot during an eviction attempt. Greer spent time in jail, but resumed his feud through the courts until his death. For all his trouble, Greer never got his property back and it seems the CPR did its best to erase any trace of his time there. There is however a nearby Greer Street named in his honour. 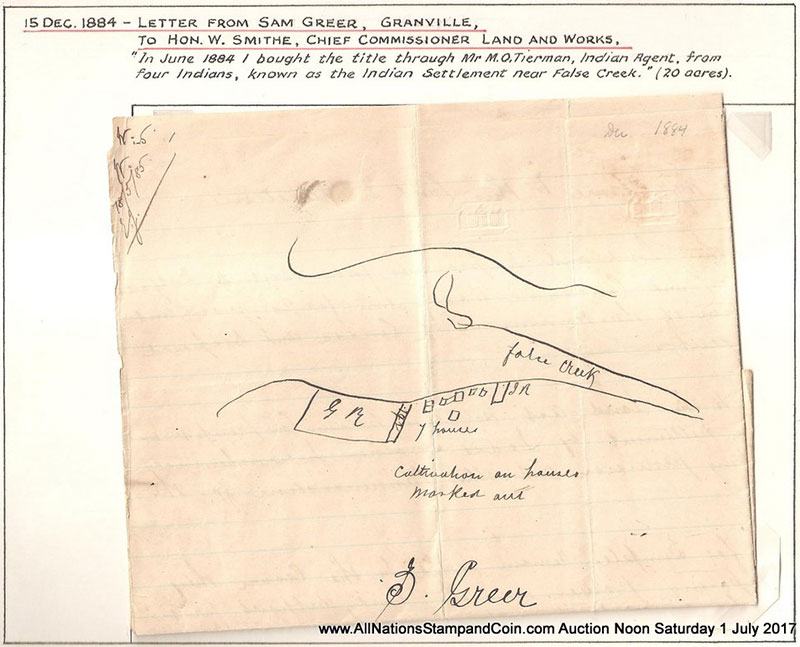 Map drawn by Sam Greer of his land claim on what’s now Kits Beach. This map recently sold for $33,000 at auction. AllNationsStampandCoin.com.

In the meantime, the CPR left the beach undeveloped. It became an informal summer resort called “Tent Town” that took off in popularity once a streetcar line made it accessible in 1905. In 1908, the CPR renamed it Kitsilano Beach, put an end to Tent Town, and finally opened the area for development.

From its opening in 1928 until 1945, Vancouver’s main indoor swimming pool, Crystal Pool, was racially segregated. Perhaps because of such racial exclusion, non-white folks informally claimed the beach at the old Kitsilano Indian Reserve below Burrard Street Bridge as their own. It became known as “Brown Skin Beach,” but was lost when the old reserve lands were developed into Vanier Park. Today all of Vancouver’s swimming holes are racially inclusive, including the Aquatic Centre, which replaced Crystal Pool in 1974. 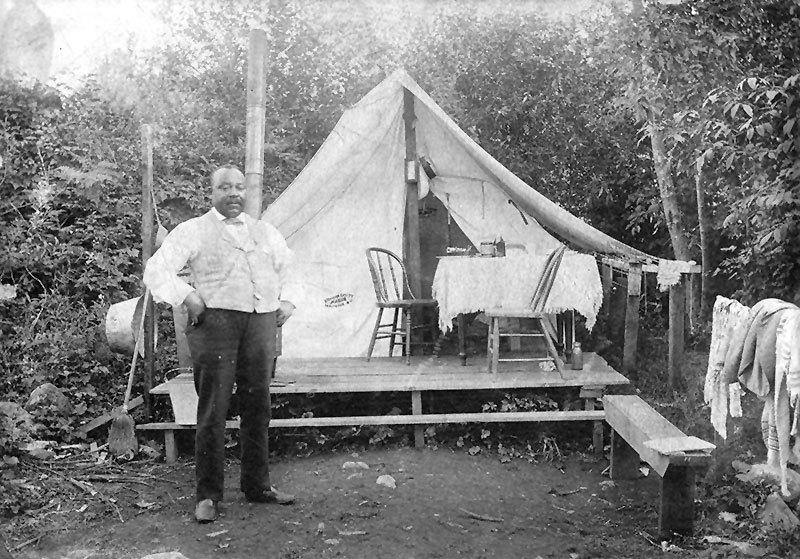 Joe Fortes in front of his tent at English Bay in the 1890s. Later the City would give him a cottage on English Bay. City of Vancouver Archives #Port P1725.

One summer day in 1887, Joe Fortes was rowing through English Bay and stumbled across the perfect swimming spot. It was a naturally sandy beach, known as Í7iy̓el̓shn (pronounced Eeyulshun, meaning “good footing”) by the local indigenous population. The beach was accessible via a trail through the dense West End forest. Joe lobbied the mayor for a road to the beach and got a three-foot wide plank sidewalk.

As Vancouver grew and the beach became more and more popular, Fortes became inextricably associated with English Bay. When not tending bar at the Bodega Saloon in Gastown, he spent much of his free time there. Joe was an expert swimmer, a large man not to be messed with, and highly respected by all who knew him. He enforced the rules on the beach (which at one time included separate areas for men and women), patrolled the area, taught children how to swim, and saved countless Vancouverites from drowning.

Eventually the City made Joe’s role at English Bay a permanent, paid position and endowed him with the powers of a special police constable. Fortes lived in a little cabin on English Bay until his death in 1922.

Joe’s story isn’t exactly secret: he’s been commemorated with a Canada Post stamp, a monument in Stanley Park, a restaurant, and a library branch. However no Vancouver beach history would be complete without him. 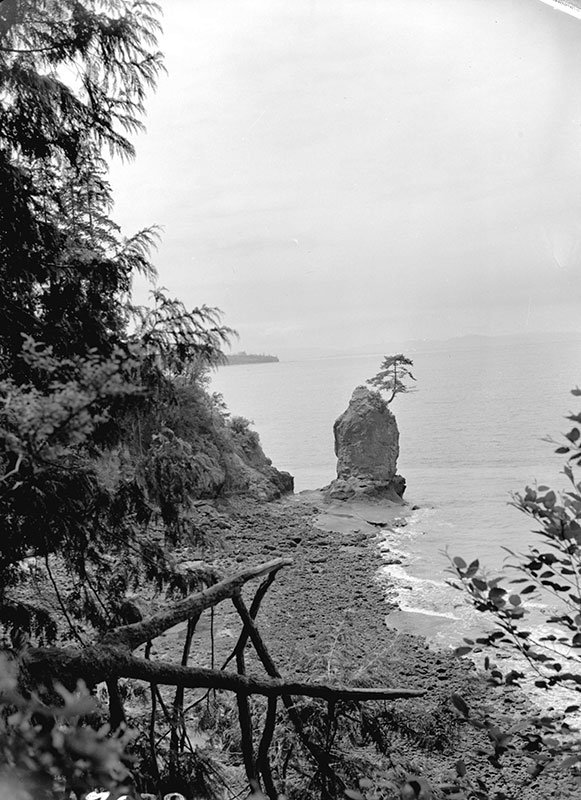 Vancouver was flooded with unemployed men during the Great Depression. Without funds to purchase proper swimming gear, they cleared a section of the beach near Siwash Rock in Stanley Park for skinny dipping and nude sunbathing. Locals called it “Douk Beach” after the Doukhobor Sons of Freedom religious sect known for disrobing as a protest tactic. The beach didn’t survive the construction of the seawall, but those wishing to swim and sunbathe in the buff today can head over to Wreck Beach in Point Grey.