A group of young people in Vancouver are hoping to alleviate the problem by bringing an international event to the Lower Mainland for the first time in May, called Darkness Into Light.

Local organizer Amy O’Sullivan explained the inspiration behind the event; “How can there still be so much stigma associated with mental health when over seven million Canadians suffer from mental health issues? That’s 20 per cent of the population! Suicide is the number two leading cause of death among people aged 10 to 24 and over 800,000 people die from suicide around the world each year.”

“Just to give you a comparison,” she continued, “while Bell’s relatively new “Let’s Talk” campaign has gained in popularity over recent years, raising much needed funds for mental health awareness, in 2013-14 alone, the Canadian Cancer Society raised close to $200 million and the BC Cancer Foundation over $35 million for cancer awareness, which is incredible on their part.”

“In the same time frame, however, the Canadian Mental Health Association raised just $1.19 million, and not for lack of trying. These numbers show the disjoint in mental health awareness and support in this country because, unfortunately, as many of half of all Canadians still think mental health is an excuse for poor behaviour. This mentality needs to change, which is what we’re hoping to achieve with B.C.’s inaugural Darkness Into Light 5km walk or run event.”

DIL was launched six years ago by Irish charity Pieta House. Today, DIL is held in over 80 locations worldwide including Canada, the US, the UK and even Shanghai. Last year, more than 80,000 people came together to walk from the darkness into the light and, this year, the number is expected to grow to over 100,000.

This year, DIL has partnered with the BC Crisis Centre and Vancity, so that every dollar raised will help to provide counselling to someone who is suffering – hopefully preventing more tragedies that have devastated so many families to date.

“We want to show our solidarity with families of the lost and with those who are surviving their own battles,” Amy added. “We are asking walkers or runners to take this opportunity to connect with and acknowledge each other, by speaking to the person beside them and making their presence known – that no-one should have to walk alone.”

All details and registration can be found on the DIL Vancouver Facebook page. 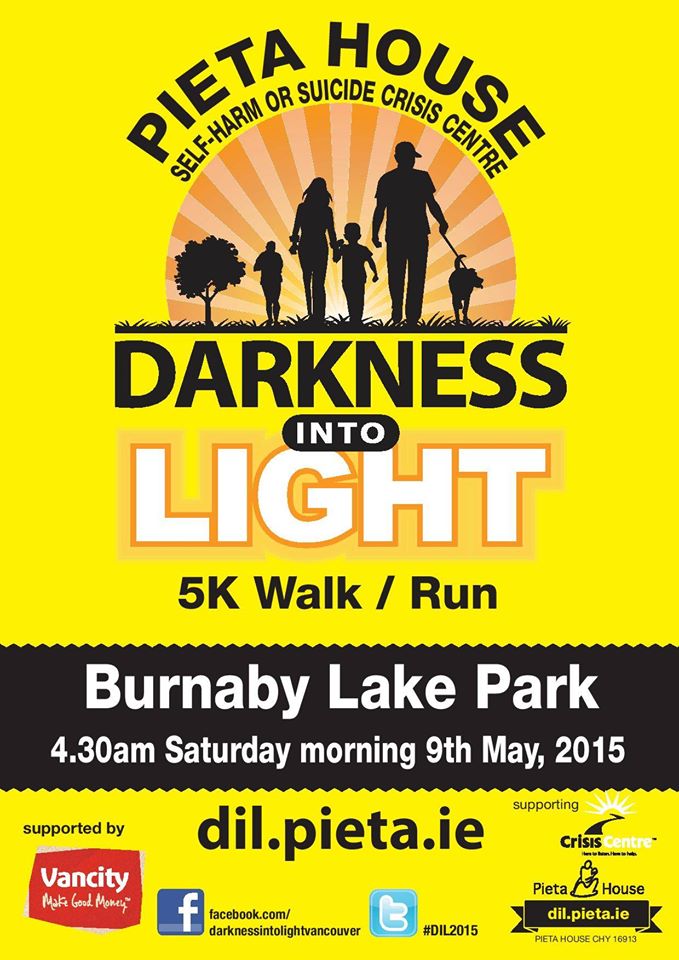