Heritage Week just concluded, so we decided to honour it by taking a look at one of Vancouver’s most admired architectural styles – Art Deco.

Art Deco is a jazz-age design aesthetic and architectural style that emerged in Paris between the two world wars.

Early Art Deco drew heavily from ancient Babylon, Assyrian and Islamic art. In the 1920s, many of these ancient cultures were just being discovered. An international craze for exploration was in full fervour, thanks to the motor engine, which brought previously inaccessible lands within reach.

Vancouver was home to many beautiful structures that typified the Art Deco architectural period, and some of them still stand today. 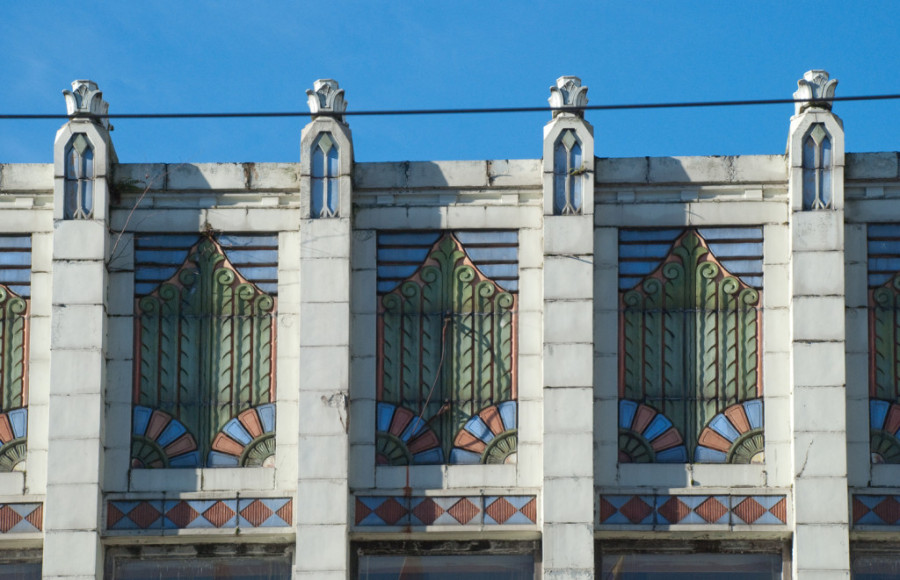 The Power Block is located near the intersection of Granville and Robson streets. The Power Block’s main building was originally a saloon, built in 1888; an Art Deco façade was added to the structure in 1929. The façade is an excellent example of early Art Deco, rich in ancient Egyptian details.

Strangely, the building’s heritage designation allowed the original structure to be knocked down in 2012, but specified that the façade had to be retained. The space is now occupied by clothing retailer Old Navy. 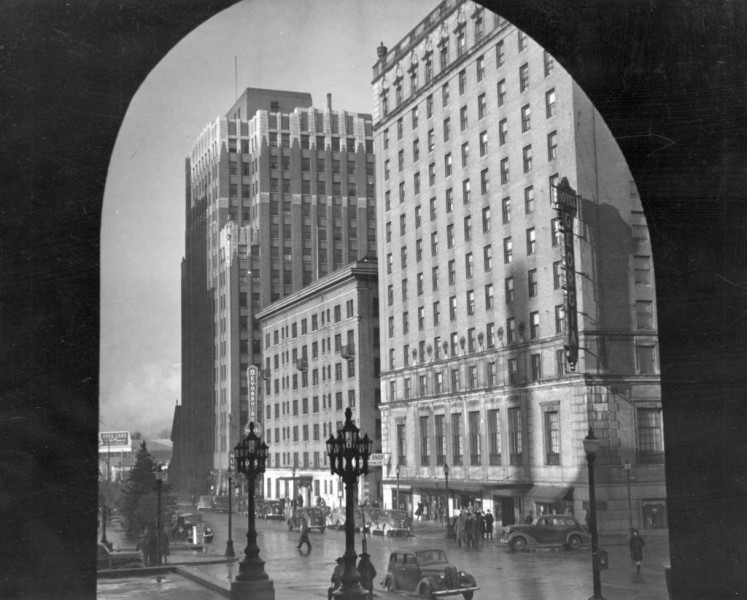 Constructed in 1929, the Georgia Medical Dental building was designed by McCarter and Nairne, the same architects who envisioned the Marine Building. Though the style was incredibly new at the time, having only fairly recently been invented in Paris, these architects displayed mastery of the style.

The Georgia Medical Dental building was 15 stories high and adorned with statues of gargoyles and First World War nurses.

It was demolished in 1989 under the auspices of being too expensive to bring up to code. A similar excuse led to the destruction of the second Hotel Vancouver.

Cathedral Place, the structure that currently occupies the site, has replicas of the original building’s statues. 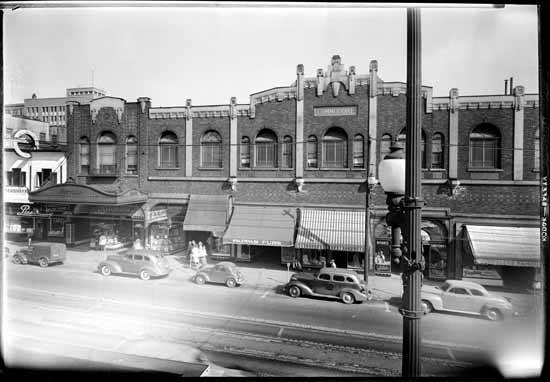 Built by brewer, rum-runner and bon vivant George C. Reifel in 1930, the Commodore Ballroom is an iconic Vancouver venue.

Stories say that Reifel’s wife was tired of lining up to have dinner at the Hotel Vancouver’s prestigious Panorama Roof, so he built her a supper club of her very own!

The Commodore didn’t obtain a liquor license until the late 1960s, so much of the merriment until that time was carefully disguised so as not to encourage any raids by the liquor squad. 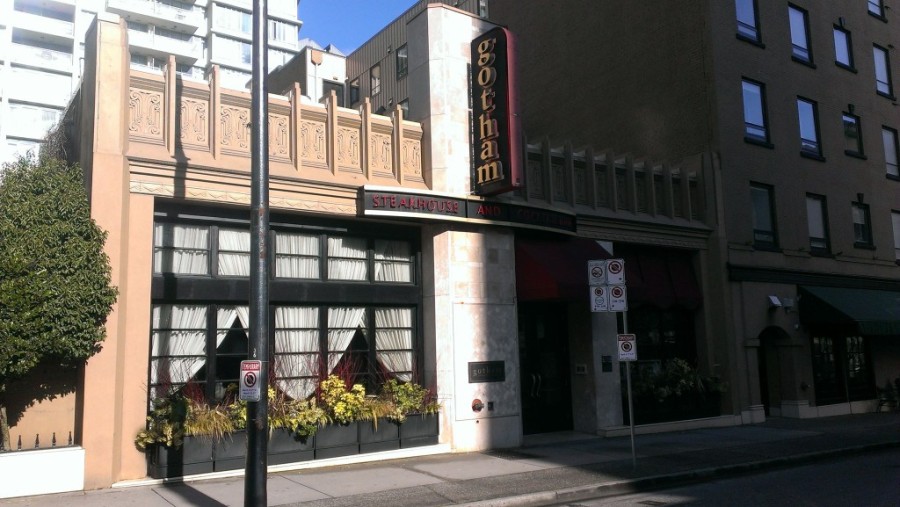 Gotham Steakhouse, photo by Will Woods.

Gotham Steakhouse is tucked away in between the Hudson’s Bay Company and the St. Regis hotel on Seymour Street.

It’s a miniature Art Deco gem built in 1933. At the time of its construction, the city was in the depths of the Great Depression. Little else was built that year.

According to architect Max Downing, the cornice is intended to resemble a waterfall.

The building’s first tenant was Deutchesland Café, who stayed until 1939 when the outbreak of WWII curbed the demand for German-themed cultural fare.

Today the building is occupied by Gotham Steakhouse, who have added to the building’s Art Deco aesthetic with time-period relevant illustrations of vaudeville star Josephine Baker on the windows. 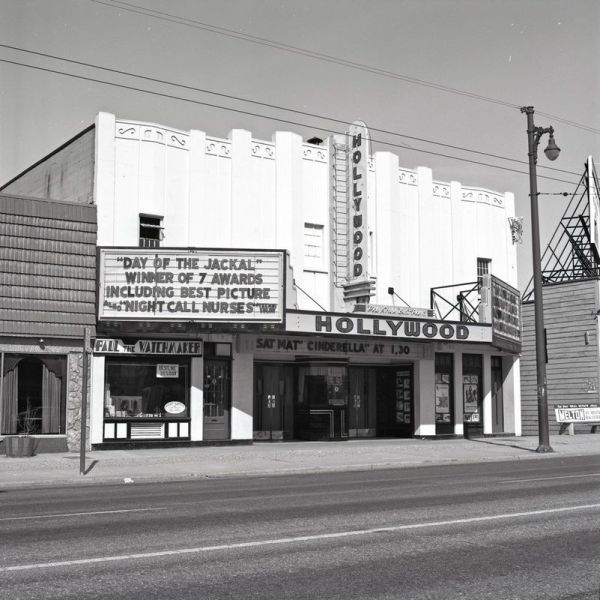 The Hollywood Theatre on Kitsilano’s Broadway was built in 1935, at the height of the Great Depression. Very little else was built in the city that year.

Designed by Harold Cullerne, the Hollywood is a streamlined concrete Art Deco theatre notable for hieroglyphic decorations on its roof-line, a ticket booth decorated in black and gold tile and colourful neon signage.

Before its closure 2011, the Hollywood was the oldest family-owned and operated cinema in Canada.

It is under threat of development. In January 2014, City Hall stated that, “the theatre is safe demolition and redevelopment until a suitable solution is found. There will be no development permit issued until future use is determined.”

The Hollywood is categorized as a “B” building on the city’s heritage register. It is recognized as, “a good example of art deco style and for having social and cultural value.”

It occupied the No. 1 spot on Heritage Vancouver’s 2014 Top Ten Endangered Sites. 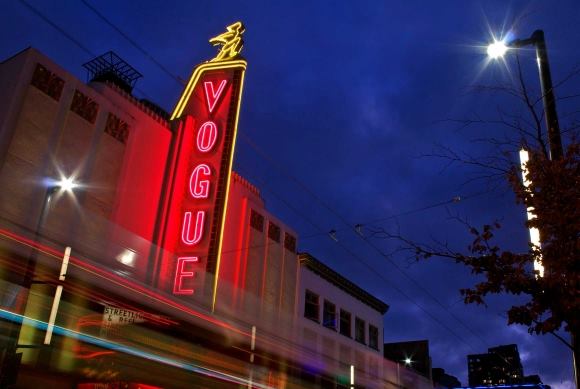 Built by rum-runner George C. Reifel in 1940, the Vogue belongs to the streamlined late Art Deco period known as Art Moderne. With straight lines and smooth curves, its aesthetic is deliberately reminiscent of transportation technology of the day.

The top of the façade features Greek Goddess Diana, who reigned over the hunt, woodlands, wild animals, birth and the moon.

The theatre’s large neon sign is, of course, one of the city’s most well-known. 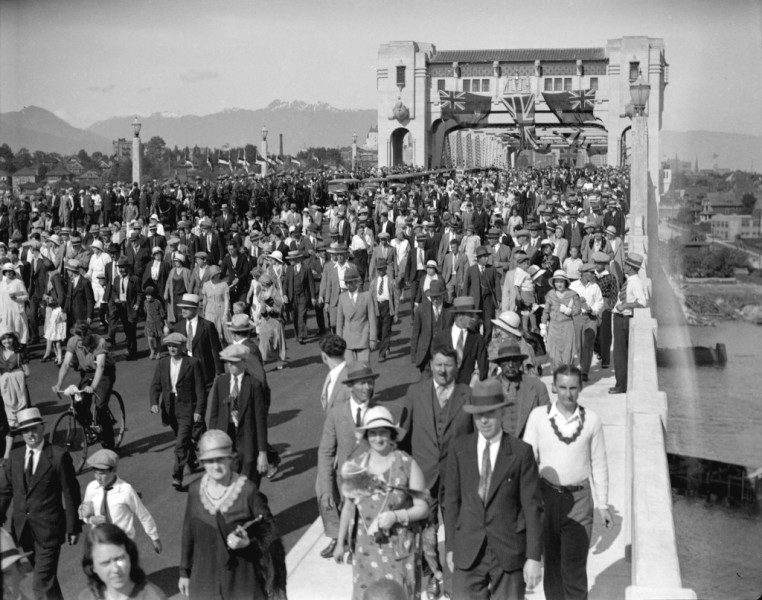 Opening Day of the Burrard Bridge, July 1, 1939, via Vancouver Archives.

The Burrard Bridge was proclaimed, “A Symphony of Steel and Concrete,” by one newspaper headline when it was opened by Mayor L.D. Taylor in 1932.

Two galleries above the bridge deck exist to mask the large volume of steel necessary to hold the structure up. Despite the rumours, no one has ever lived in them.

Underneath the bridge, there’s a large mesh of steel that was designed to carry a railway line. The line was never built.

The oversize lamps at either end of the bridge are a monument to First World War soldiers who, “once huddled round fires in their prison camps.” The lamps are also designed to aid ships’ navigation.

Construction of the bridge meant the loss of Cedar Street, which once lay in the space now occupied by the south ramp of the bridge. 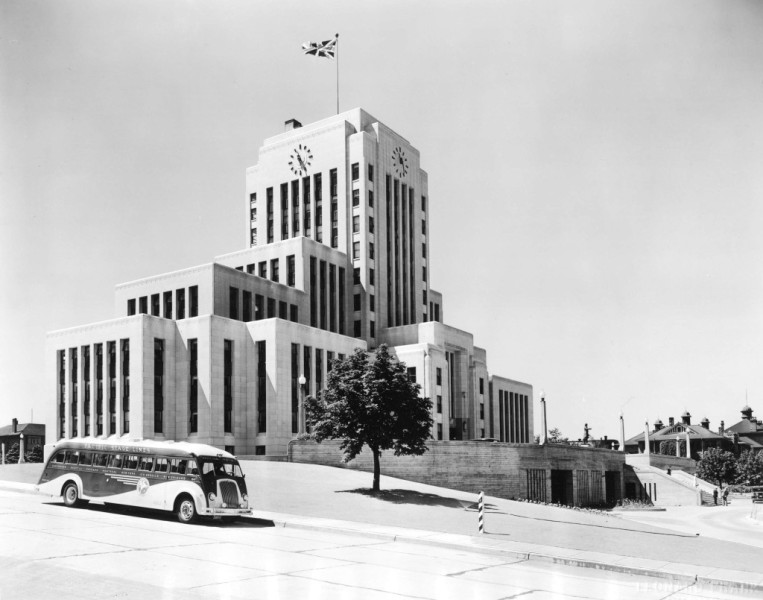 Vancouver’s City Hall is one of the great art deco buildings in the city. Built in 1935, it was, in part, a make-work project to create jobs during the Great Depression, similar to the Lions Gate Bridge.

The force behind the building was then-Mayor Gerry McGeer. He personally drummed up much of the financing for the structure by calling on various wealthy donors. It was built in a remarkable 330 days at the cost of $1 million.

Alternate sites considered were Strathcona Park and Victory Square, both located downtown. It’s said that the current location was chosen due to its distance from downtown, which made it harder for protestors, activists and strikers to target the building. 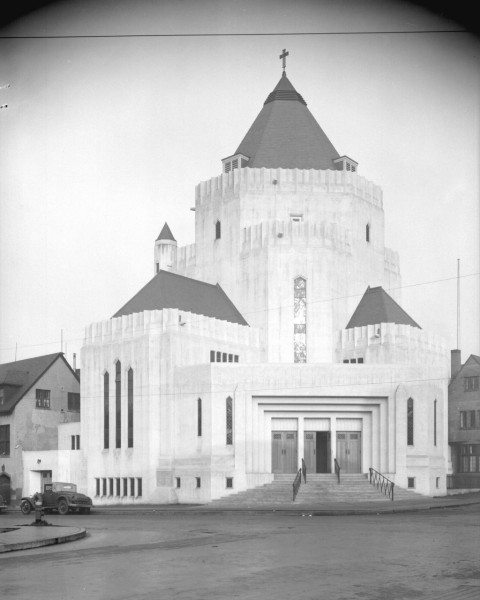 Located at the intersection of Cordova and Gore streets on the Downtown Eastside, this Anglican church is one of the city’s most remarkable buildings.

Like City Hall, St. James Church was one of a few large-scale construction projects undertaken in Vancouver during Great Depression. The raw concrete finish remained unpainted until 1972. 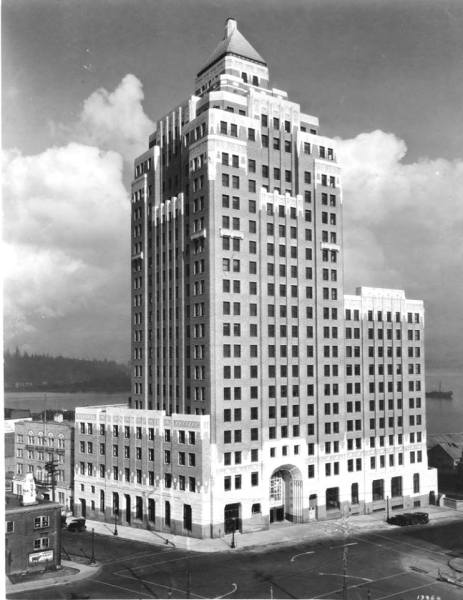 The Marine Building is undisputedly the most recognizable Art Deco building in the city – and many residents’ favourite.

Built in 1930 on the eve of the Great Depression, architects McCarter and Nairne intended the building to evoke, “Some great crag rising from the sea, clinging with sea flora and fauna, tinted in sea-green, touched with gold.”

Located at 355 West Hastings, the building cost $2.3 million to build – a staggering $1.1 million over budget! It was financed by rum-runner Joe Hobbs. Thanks to the Great Depression, Hobbs went broke and the building was sold to the Guinness family for only $900,000 in 1933.

The Marine Building is well-known for its iconic wedding cake icing exterior and maritime details, such as aquatic creature reliefs around the arched entryway.

This piece originally appeared on the Forbidden Vancouver blog.

Written by Kendall Walters and Will Woods for Forbidden Vancouver Walking Tours.