The Vancouver Aquatic Centre has closed for the day due to what’s being called an electrical issue after flooding last night.

Vancouver Aquatic Centre is closed. Some serious flooding has caused an electrical issue. Likely closed for the day. pic.twitter.com/YcvPUwe7jM 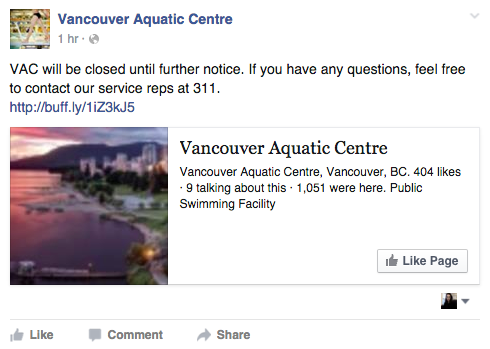 The Vancouver Parks Board told Vancity Buzz the flooding was caused by all the heavy rain. They determined there was water in the basement at about 8 p.m. last night and patrons were asked to leave.

Cleanup took place shortly after, but then pooling water on Beach Avenue overwhelmed the sump pump, which meant more water flooded into the building and took out the electrical system and boiler in the process. The centre remains closed, but the Parks Board is taking the situation hour-by-hour.