A while ago I wrote about Vancouver’s role in pop culture and especially science fiction. Having stood in for countless worlds and futuristic cities around the globe, I lamented the fact that our ‘burg has never received the sci-fi street cred it deserves. Well, folks, this is no longer the case. Showcase’s new time travel / cop show, Continuum, finally adds a much awaited futuristic spin by showing us a possible Vancouver of 2077. And the way things are going it’s not that far a stretch.

Sitting down with Continuum’s creator, Simon Barry, I learned about what happens to Vancouver over the next 65 years. How the city’s geography changes, and how people live in an overcrowded, corporate run city-state which controls almost every facet of individual life. 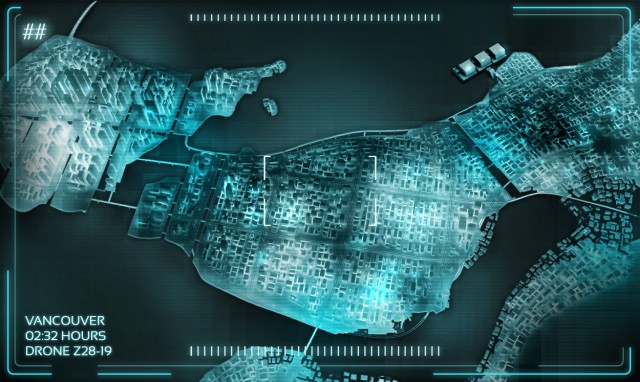 The premise is pretty simple. With ocean levels rising much faster than anticipated, Vancouver was at risk of becoming submerged and so the powers that be built a massive dam, from the tip of what was formerly known as Lighthouse Park, all the way to Wreck Beach. While most of the water was held at bay, there was still considerable flooding and everything south of Marine Drive was left submerged in a watery grave. Much like today, a lack of political will left Vancouver’s pride and joy, the DTES, to rot. Except this time under about 3 metres of water, forcing the poverty pimps into 300 story glass towers while the rest of the Main and Hastings set were left to fend for themselves and built a massive shantytown/favela in the marshlands formerly known as Chinatown and into Strathcona. No word on what happened to the trust fund hipster kids living in parentally subsidized 1800 dollar basement suites.

Looking east over Hastings,towards Main. Check out the Balmoral Hotel!

Still, with False Creek having reclaimed everything from Clark Drive to Great Northern Way, a massive influx of people from abroad (40 Million by 2077) required some drastic measures to be taken and so Stanley Park, now separated completely from the mainland, was leveled and carved up into a grid where the New Vancouver downtown began to grow and replaced the 800 year old forest with 500 story, mile high towers, changing the landscape forever. Those who say such a thing would never happen, that our political and cultural leaders would step up to the plate and protect the “Jewel of Vancouver” should check themselves, as developers have already expressed much interest in building a string of high end condos where the 2006 windstorm knocked over several dozen acres of trees. Besides, everyone knows our current City Council is just an administrative arm for ambitious real estate development companies.

Speaking of companies, with all three levels of government facing bankruptcy, corporations stepped in to do the jobs currently associated with pandering slimeball politicians, busybody premiers and handsome Ken Doll mayors. And while everyone’s basic needs are taken care of, the main goal of every corporation is to generate revenue and so, all people are now born into debt. It takes a lot of resources to keep people fed, housed and clothed, so everyone owes their lives to the companies that brought them into the world. If by some crazy random happenstance you decide to remove yourself from the trappings of corporate rule, there’s always the wastes of the DTES or a massive jail where the Port of Vancouver once stood, serving as a constant reminder that you better work your ass off to pay them bills. 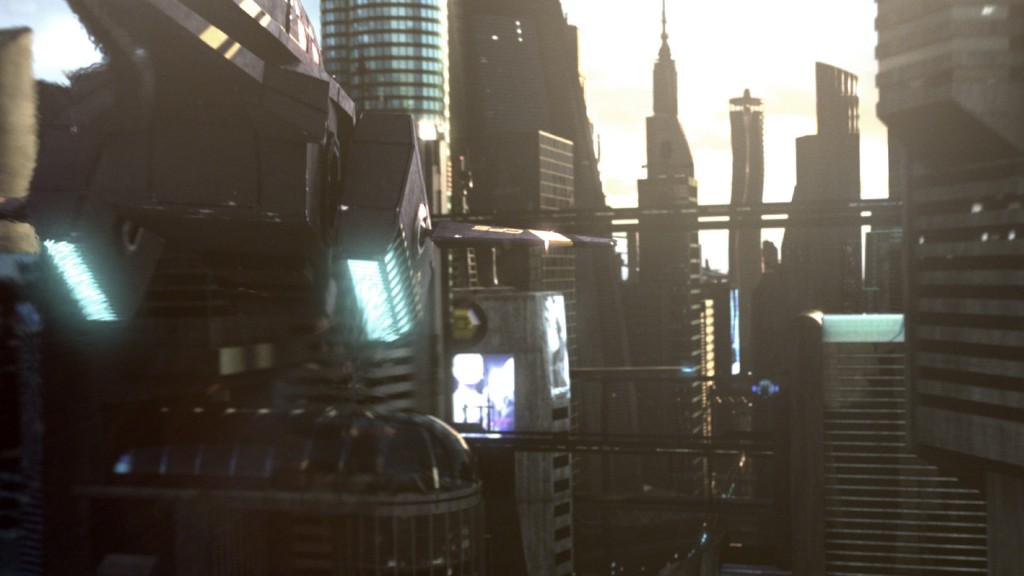 Greenwashers and eco-guilt ridden white folks finally have their comeuppance, knowing that there are no cars in the Vancouver of 2077. Instead, a massive high speed maglev system circumnavigates the perimeter of the city proper and winds its way through the Plasteel and Ferrocrete jungle. The bureaucrats at Translink would do well to watch the show as the rapid transit network of the future is reminiscent of the current Skytrain, but moves at about 300km/h and is never ever late. Swarms of autonomous drones and personal flying machines weave in between the needling towers of Vancouver 2077. Carrying cops, corporates and others who can afford it, to various destinations. In the future, one avoids touching the actual ground in one can afford it. Kind of like today, but with fusion powered flyers and not Ferraris.

Check out the Maglev and the prison where the old Port used to be!

So, long story short about Vancouver in the next 65 years: Environmental disasters, plus population explosion, plus economic and governmental collapse, plus unchecked corporate growth, equals shiny towers in the sky, brutal financial constraints on the average person, tenuous control over the disenfranchised and a hell of a view from 350 stories up and not much different from today.

Looking East at the park forrmerly known as Stanley!

All images courtesy of Artifex