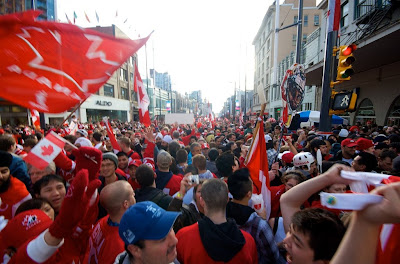 The Olympics are over and the Buzz will get back to focusing on what makes this city so great, the restaurants, the urbanism, the beautiful people, the great outdoors and much, much more. After two weeks of solid partying the hangover is immense (its now day 19 of this perpetual hangover) and not just from the sheer volume of alcohol consumed over the two weeks, but an emotional and social hangover as Vancouver returns to normal.

Here is our top ten non sporting things about the Olympics:

10. DeadMau5 at LiveCity Yaletown: Although I did not get in, I had a blast with numerous other people just outside David Lam Park. Out of all the free shows, his was the one that was most anticipated. So much so that people began to panic and spread false rumours in hopes of getting in. He killed it!

9. The Buskers: You had Batman, silver Elvis, the rapper in front of Sears and many more as Granville street become busker central. I hope this becomes a trend now that the redesign of Granville is almost complete, more street entertainers is always welcomed.


8. Street Hockey, street hockey and more street hockey: Impromptu matches were breaking out all over the place. Last evening, I counted 5, one of which happened just outside the law courts, forcing the police to reroute traffic and catch a glimpse of the game as well.
7. Olympic Flash Dance Mobs: This was probably one of the most awesome sights, seeing hundreds of people singing and dancing in the city streets. See the videos, Dancing in the Streets and Red Mitten Flash Dance at Robson Square.


6. Beautiful ladies showing their Canadian pride: I wasn’t as impressed with the women from abroad as I was with local Vancouverites. What was more impressive was how they rocked the Canada gear. Well done ladies, bravo. I guess the saying is true, our women are truly amongst the most beautiful in the world. As for the women in this city, I bet you had the time of your life as lots of handsome euro dudes made it into town for the games.
5. Making new friends: The Olympics brought in people from all over the world. Some 250,000 visitors came through our fair city during this 17 day carnival (they also spent over $100 million over two weeks). I met some really great people who are absolutely in love with this city and plan on coming back in the summer. How could they not.

4. Free stuff everywhere: From bottles of Vitamin Water to Olympic pins, there was lots of free swag being tossed about. I know many peg the Olympics as one big corporate schmooze fest. However, many enjoyed the entire Olympics without having to break the bank. Some of that free stuff will stick around for the Paralympics (see our guide).
3. Parties: The amount of parties that were going on in town was hard to keep track. Trying to hit up every party possible in the two weeks is damn near impossible, unless of course you didn’t have to work or go to school. I’d like to see more outdoor festivals in Vancouver. Mayor Robertson and their fun police better make it happen.

2. The Crowds: From the sheer mass of people flooding many downtown streets everyday to the congested, yet oddly efficient SkyTrain system, the crowds were amazing. If you want to know what Vancouver will be like in 15 years, these past 2 weeks is probably a good indication. I absolutely loved it!

1. Patriotism: Smiling maple leaf tattooed faces, high fives with those red mittens and impromptu singing of O Canada at every corner imaginable. Who knew Vancouverites Canadians can be so patriotic. I have never seen such overt patriotism in this country. Not even on Canada day. It was a a beautiful, unifying force that brought people of all races together.

Those are my top ten non athletic related moments of these games. Feel free to add some of your favourite moments from the Olympics.

I and the rest of the writers on this site hope that you enjoyed our Olympic coverage. We all work 40 – 50 hours a week and provided the best coverage we possibly could, while still chugging down brews with complete strangers for two straight weeks. It was a blast and I am extremely proud of the city I’ve lived in my whole life. I never wanna leave this town!