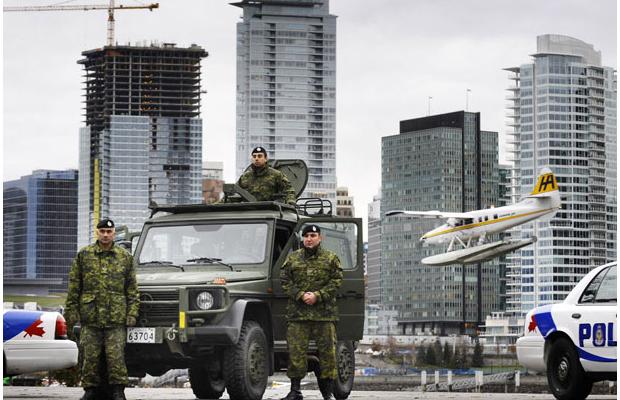 Security at the Olympics will be strictly enforced and if you are planning on going to an event expect airport like security measures. Surveillance cameras have been activated all over the city and the security ‘nerve centre’ is ready. So give yourself 2 hours or more prior to an event to ensure you get inside on time and don’t miss a minute of the action. See list below.
Here is the official guide to entering a venue presented by Vanoc themselves and if you’re too lazy to click on the link here it is below. Basically the security measures are in place to ward off the idio…err I mean the paid protesters.

Restricted Items And Actions
Selected items and actions are identified as restricted in order to ensure the safety and enjoyment of all spectators at the Olympic Winter Games, ensure the laws and provisions are upheld, and the contractual obligations to third parties are respected.

Spectators carrying restricted items will be asked to either return them to their point of origin or dispose of them immediately.

■Aerosol sprays, flammable liquids, fireworks, water balloon launchers
■Ambush marketing of any kind, distribution of leaflets, pamphlets and non-approved publications, promotional material and wearables
■Animals (except service animals)
■Balls, Frisbees, racquets, hockey sticks, pucks and other sport items
■Bicycles, scooters, skateboards, skates, skis, snowboards, sleds
■Broadcast and lighting equipment from entities other than rights-holding accredited broadcasters and the host broadcaster
■Broadcasting and recording through the use of mobile phones or other transmitting devices (such as two-way radios, recording devices, PDAs or video cameras) for commercial purposes
■Dangerous, disruptive behaviour or behaviour which disturbs spectators (including, without limitation, public drunkenness, fighting, gambling, spitting, threatening staff or spectators, throwing objects onto the field of play and/or public seating area, political or religious activities)
■Displays of signage and banners containing religious, political, provocative or obscene content and or visible branding and trademarks of sponsor and non-sponsor companies; flags of non-participating countries; flags and banners larger than 2 m x 1 m; poles larger than 0.9 m (flags cannot be attached to any surface in the venue)
■Devices capable of causing a disturbance such as air horns, trumpets, lasers, thundersticks and noisemaking that might disrupt the session or be disturbing to other spectators
■Drugs, needles, prescription-strength medicines not validly prescribed for the ticket bearer by a physician
■Flash photography and other lighting devices (such as laser pens) anywhere around the field of play (exceptions may apply)
■Food and beverages, including alcohol, purchased outside of the venue (except for medical needs)
■Folding chairs or benches (stadium cushions are allowed in mountain venues)
■Glass containers or bottles
■Golf umbrellas, open umbrellas in seating areas disrupting spectators’ views
■Large bags (bags small enough to fit under a seat and not obstruct aisles are allowed) containers, coolers, ice chests
■Smoking (except in designated areas)
■Strollers in a seating bowl or viewing area
■Unauthorized collection of money or commercial activity (such as hawking, ticket resale), sale of counterfeit goods
■Use of radio frequency devices (Wi-Fi, pocket wizards and land mobile radios) that have not been registered and coordinated with Industry Canada prior to entry into
the venue