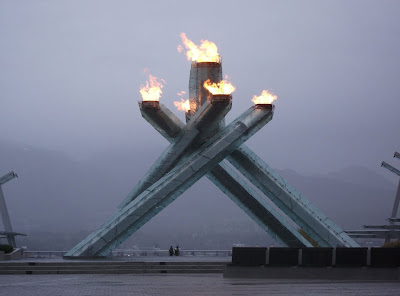 Photo by ceecee at ssp.com
I hinted that the cauldron would be permanent fixture by the new convention centre soon after it was unveiled to the world on February 12, 2010. At the time I could not reveal the source of my information but it was a credible one and true enough the Olympic Cauldron will be remain long after the games have come and gone. Simply awesome!

This legacy will ensure the cauldron, lit tonight by Canadian hockey legend Wayne Gretzky at the conclusion of the spectacular Olympic Opening Ceremony at BC Place, will be a lasting reminder of the Games.

Gregor Robertson, mayor of the City of Vancouver, also acknowledged the importance of this legacy to the Host City of the Games. “We deeply appreciate Terasen’s legacy to the people of Vancouver. This cauldron and its flame will draw people not only during February and March 2010 but in the years to come as a potent symbol of our time in the limelight as the successful host of the world’s best winter athletes.” [source]