The Canucks snapped a four-game losing streak (winning 2-1), Eddie Lack played incredibly (aside from one big mistake), and I have no idea how to react.

Do we cheer? Dare we get our hopes up? I’m as scared as all of you…

1. Mixed feelings on the win

Looks like I’m not the only one who doesn’t know how to react to this new feeling.

For Hosea, it was akin to a dream:

This is real life. The #Canucks win a game.

Then again, that top-five draft pick gets that much farther away from their reach. #Canucks

Personally, I don’t know how to feel. I’m numb from the recent stretch and the idea of squeaking into the playoffs and being swept in the first round again causes me great anxiety. Plus, Hosea makes a good point – wouldn’t the Canucks be better of getting a good draft pick at this point?

2. Bieksa talks about the meeting

Kevin Bieksa was on After Hours and he gave some insight into Saturday morning’s team meeting. If you didn’t hear, the Canucks held a 14 minute meeting during the morning skate – usually an optional game-day warm-up – conducted by assistant coach Glen Gulatzan.

“It was more or less getting on the same page as far as our forecheck, where we felt we’ve been struggling lately and teams were getting out a little easily on us. That’s kind of the starting point. Next thing you know we’re in our neutral zone, we don’t have good gap, and we’re playing in our end for extended periods of time.”

Interesting that it was the assistant coach, not Torts, who managed to get the team back on the right track for Saturday night’s game.

Bieksa had this to say regarding Ryan Kesler’s reported trade request:

We know Kesler has definitely had talked with Mike Gillis about being traded, so Bieksa’s comments would mean that it was the Canucks who instigated this, not Kesler. And they’re good friends, so Bieksa would know.

Just in case you’re worried that Bieksa could be the next player to want out of Vancouver:

That makes me feel warm inside. You can watch Bieksa on After Hours here:

4. Lack must do yoga

Early in the second period, Lack scared everyone in Vancouver by letting in a goal from the center line that reminded us of a goal we’d hoped never to remember again…

He then proceeded to shake it off and play an incredible game.

Don Cherry lectured Canucks fans after the first period about booing Lack in the Heritage Classic – but he’s a little off on that one – Vancouver is behind their new starter 100%.

Against Dallas, Eddie Lack went post to post to make an incredible save on Jamie Benn. He nearly duplicated that with an incredible post-to-post save on a 2-on-1 against Calgary. 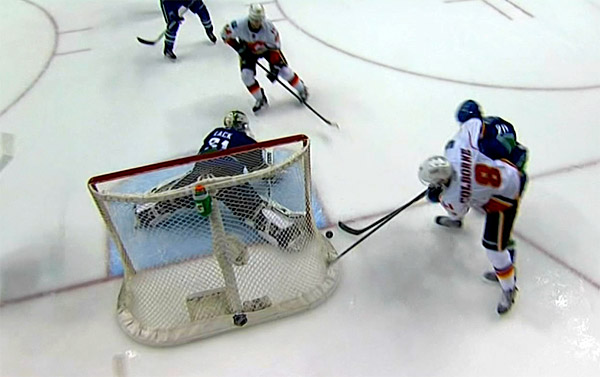 He’s flexible. That’s why I’m saying he does Yoga. Get it?

We need something to yell/tweet when Lack makes a huge save. Any ideas? #Canucks

Come on, you can’t yell that.

The Eddie chant works. And if anyone can do the “Aflack” thing like Gilbert Gottfried, it would be pretty hilarious.

I think it’s still a work in progress.

6. Matthias is on the power play

I was wondering why…

@omarcanuck he hasn’t tuned out the coach yet, so makes sense.

Actually, that’s not a bad explanation.