Vancouver’s own The Donnelly Group will debut their first ever stand-up comedy night  the VanCity Summer Comedy Extravaganza this Friday, June 7, at the Vogue Theatre.

The night, hosted by Los Angeles Comedy Comp finalist and Vancouver resident Dino Archie features  a line-up of three of today’s most hilarious and fresh comedians all on the cusp of becoming the next big household names of comedy.

If you’ve ever seen one of Archie’s stand-up gig’s around the city you know you’re in for a hilarious treat. As a host and creator of his own regular show, Simply Dope Comedy, Archie has a noticeable talent at owning the audience.  A combination of his humble nature and self-deprecating jokes make him not only funny, but extremely likeable.

The VanCity Summer Comedy Extravaganza is shaping up to be the hottest comedy event this summer. If you’re a comedy fan and free this Friday night, be sure to check it out.

LA comedian Brent Morin, the lead in NBC’s sitcom UnDateable and winner of the Just For Laughs Fresh Faces.

Vancouver’s Ivan Decker, CBC Radio The Debaters’ panelist and host of his own Comedy Now special.

Doors are at 7:30 p.m. and tickets for the show are available online at Northern Tickets , as well as the Vogue box office and Dipt 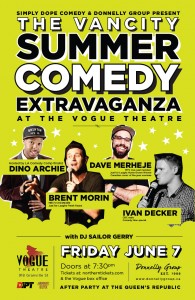