Vancity Original, the line that everyone loves to rock, but how many Vancouverites know the history behind the brand that seems to be taking over the Lower Mainland’s street scene? Well we interviewed the founder Jeff Martin aka Martini about exactly that and more. We even dispelled a few rumours out there on the streets about the brand. Jeff and the crew at Dipt were also kind enough also to give us five $50 gift cards (expire April 30th) to giveaway to our readers. You can use it towards any item from their Vancity Original or Dipt line. Ladies Dipt has got you hooked up too as the Vancity Original line also has dope gear just for you.

Featured in the photos is the lovely Teya Wild rocking the mens and womens gear, and looking rather fine I might add. The interview and contest details are below.

Vancity Buzz: The concept of Vancity Original how did that come about and how long has Dipt been doing it?
Jeff Martini: The concept of Vancity Original came off a slogan I put on the back of a shop shirt from my first store F.W.U.H. I put “Vancity Original Est. 1994” on the back of the shirt in reference to when the store was started and I did that around 97-98 and I liked how Vancity Original sounded so I got local graf artist Virus to do up my first logo which is the baseball style logo that we still use. It just sort of slowly built from there and really started to take off when I introduced the Run DMC style logo and did a series designs based on hip hop groups. I work with a couple of designers, one who specializes in logo spoofs and one who does most of the more original designs. Shouts to both of them, they know who they are but I don’t need anyone else knowing [laughs] Wait ’til summer hits, we’ve got so much new heat coming its gonna be bonkers!!! 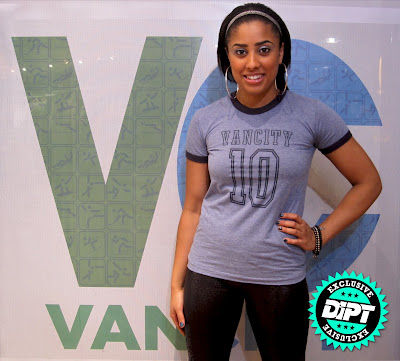 VcB: Is it true that the Vancity Run DMC inspired shirts and hats got you guys into some legal hot water?
JM: No all that happened is late last year someone in the art department in New Era called out the design and they shut it down. Pretty wack since I’d been doing the hat for years and it was by far my top seller. Funny thing is about 3 months later New Era made an actual Run DMC cap exactly like my Vancity ones. The original but the remake I guess. Not the first time New Era has jacked my designs though, but it’s all love. They also said I couldn’t put 604 on the hats anymore because it could have gang connotations or some stupid shit so I started doing the VI0IV (roman numerals for 6 and 4 with a 0 in the middle).

VcB: I see that you have a website coming soon called vancityoriginal.com. When will that be launched and what can we look out for on that site?
JM: To be totally honest it will be a second before that site is really up and running but when it is, it will have online sales, sightings, new designs etc.

VcB: During the Olympics you guys had a the concept called “Run Game”. Was that your way of getting into the Olympic Spirit?
JM: Yeah one of my designers came up with that. I thought those were the illest joints. They were perfect for the Olympics but are fresh year round. We run game!!! The Vancity Original stuff outsold any other brand during the Olympics 10 to 1. Thanks to all the supporters. 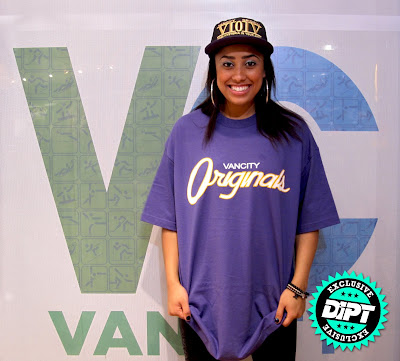 VcB: I see some other stores carrying the brand sometimes, are those knock-offs or does Dipt distribute?
JM: PUNK ASS BITERS. Vancity Original apparel is available EXCLUSIVELY at Dipt and anyone else throwing Vancity on clothing is a jock rider. Don’t support the frauds, fakes and fools. I had a dude come in and say he was starting a line called Vancity Inc to my face. I was like are you serious? Look around dude…. the fuck outta here!! I saw some real wack bullshit from some place called Goldmind Productions or something. Jenky!! I don’t mind calling them out either. Beat it!

VcB: Vancity Original is growing in popularity every day, You even see suburban kids rock it, where do you see this going in the future?
JM: Yeah I really gotta thank everyone, especially the Lower Mainland, for embracing the brand and representing for the city. The brand spans all scenes. I’ve seen everything from punks to skaters to scenesters to strippers to hip hop heads reppin’ it. It’s in just about every relevant rap video coming out of Van these days, which is so dope. I’ve got support from the local hip hop OG’s like Red 1 and his Killawatt crew, J-Swing, Swollen Members and the Battleaxe Warriors, The Freshest, Faction Sound Crew, Young Kazh, Checkmate and Concise and mad other hot new artists and DJ’s (all respects to everyone I never directly mentioned, you know I got you!).It’s been spotted at dances in Kingston, on the streets of Paris, in the favela’s in Brazil, in New York, LA and all over Canada. I am currently working on expanding the line to include a broader range of items and will be dropping new designs regularly. 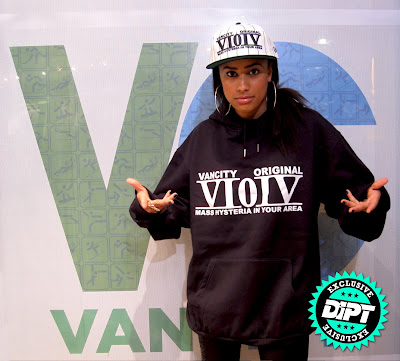 Many thanks to Jeff and the whole Dipt crew, they’ve always shown Vancity Buzz love by hooking up our staff of writers with tees and doing giveaways on our site. Look for more with Dipt whenever they launch a new line and maybe a Christmas contest.

Contest Details:
We are giving away five $50 Vancity Original gift cards to five lucky readers. To enter simply retweet this link or enter a comment by telling us what you love about Vancity. Do both and you get two entries, and thus doubling your chances of winning. To simplify things just insert this text into twitter. Contest ends Wednesday at 9pm.

Note: The contest is open to Canadian residents and the gift card expires April 30th so your ass better be able to get to Dipt by then. Further you must be following @DiptVancity and us @VancityBuzz for your twitter entry to be considered eligible. Good Luck!