For people on a fixed or low income, it can be a daily struggle just to survive. And with holiday meals to prepare and presents to buy, the financial demands are compounded during Christmas time.

Money is often too tight to spoil four-legged family members, even though they’re a constant source of love, companionship and support – especially when times are hard. I always give my two dogs a present or two around the holidays and I wanted to share that experience with people who normally don’t get the chance.

And after doing a segment on “gifts that give back to charity” for pets on the consumer show I produce, show host and CTV Vancouver Consumer Reporter Lynda Steele and I decided that we’d like to give back in our own community —and give local pet owners a helping hand to pamper their pooches for Christmas. We decided to put together present packages for dogs to be given out through the Greater Vancouver Food Bank. We called it “Operation Doggie Bag.” 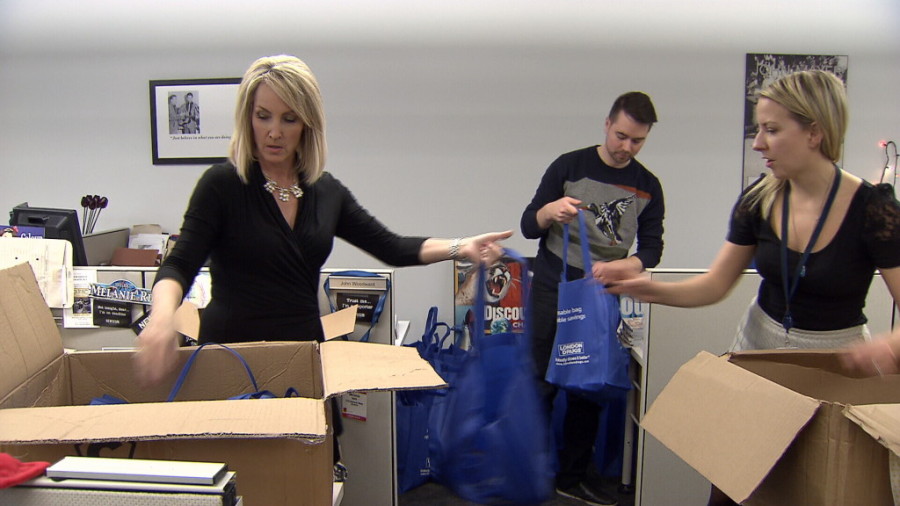 That’s when we joined the 30 Days of Kindness project, where generous people perform a random act of kindness “to make the world nicer one kind act at a time.” Past kind acts have included a Vancouver BBQ joint serving a dinner feast to hospice workers in Langley and a school teacher that served up 23,000 pancakes for an Abbotsford breakfast program.

To make our act happen, we first solicited help from Modern Dog, a Vancouver-based dog publication. They generously provided 100 of its winter editions to be put into our holiday pet present packages, plus two huge boxes stuffed with dog toys, leashes, collars, bully sticks, toothbrushes and pet gear to add into the parcels.

Next to join the kindness train was Petcurean, a Canadian-owned pet food company that donated 300 pounds(!) of premium food to be added to the presents. 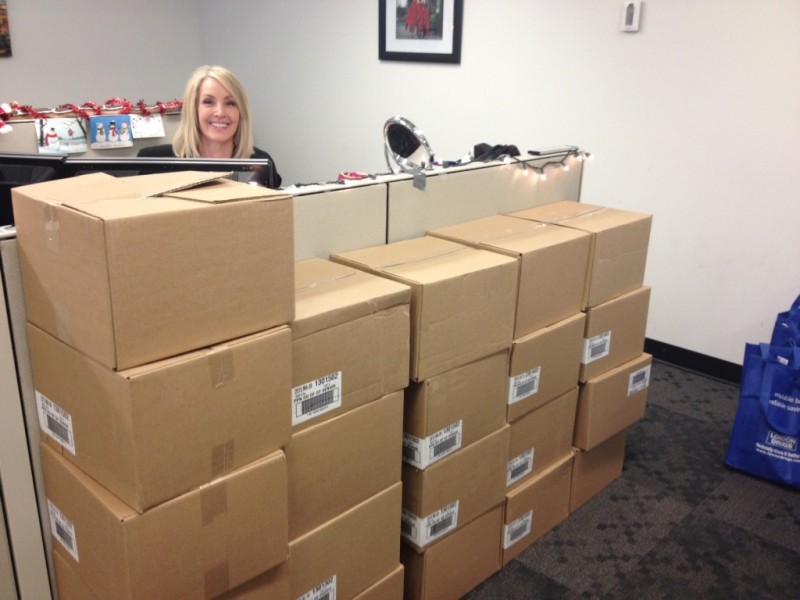 The giant pile of boxes of donated food, with Lynda peeking out.

It was so much food that we donated the remaining 20 boxes to the BC SPCA, which will distribute it to homeless and low-income pet owners through its weekly Charlie’s Food Bank program, a very worthy charity effort. 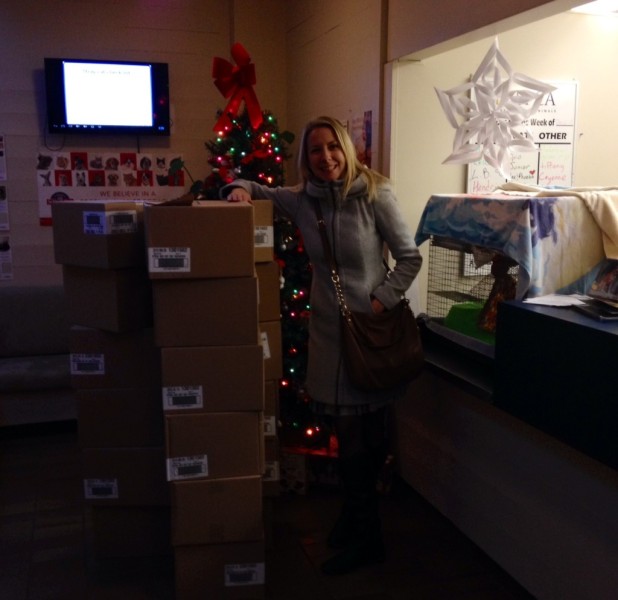 Darcy dropping off 200 pounds of food at the BC SPCA. It will be distributed to low income and homeless dog owners in Vancouver.

To top it off, London Drugs gave us great reusable bags to pack all the presents in.

Lynda and I bundled up on Tuesday and delivered the 170 doggie bag packages to the Greater Vancouver Food Bank office in East Vancouver, where they will be distributed to pet owners over the holidays. 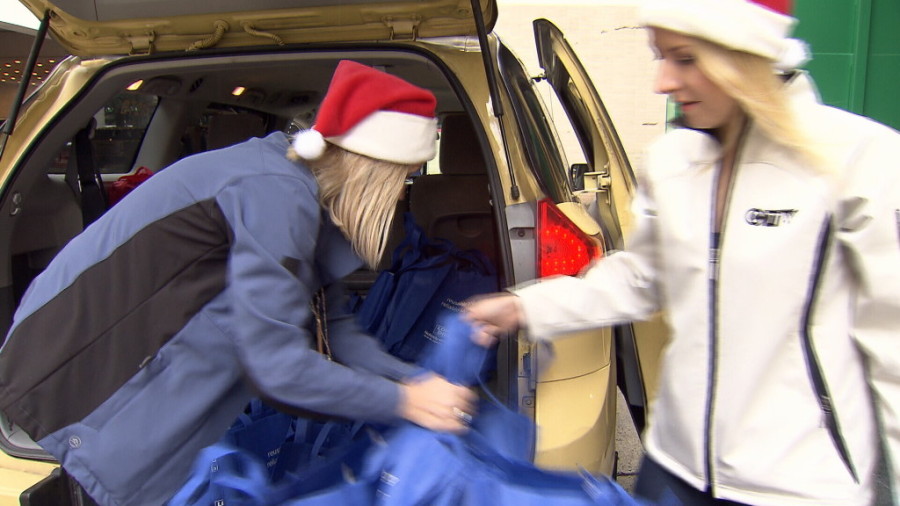 Packing up a cab with dozens of packages for pets.

“A lot of families would love to get a Christmas present for their pet – because they really are part of the family — but they simply don’t have any money to spare,” says Kay Thody of the Greater Vancouver Food Bank.

Talking to the staff, I was shocked to learn just how many people use the food bank in the Lower Mainland. We often think of Vancouver as a wealthy city, but hunger is a hidden problem: the organization provides assistance to 28,000 people through its 15 food depots every week. 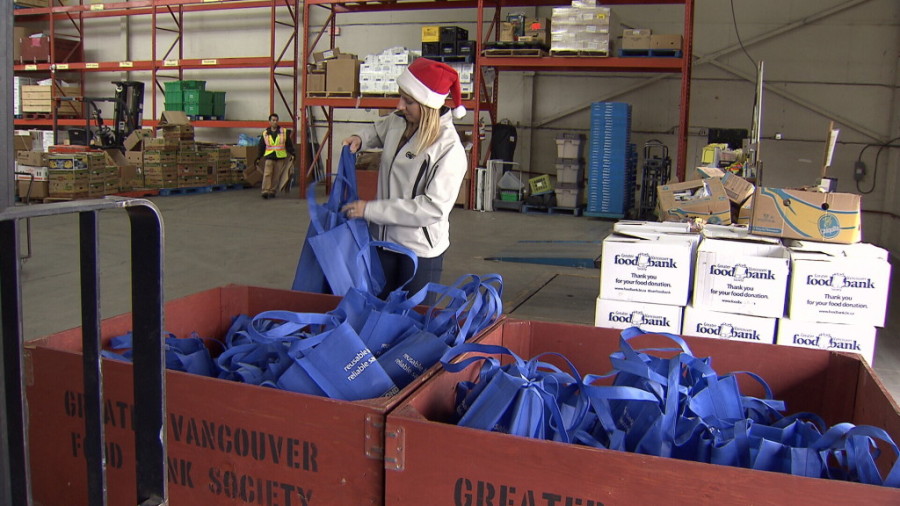 Our doggie bags, now at the food bank, will be given out to low-income families.

Lynda and I hope that our act will help make a merry Christmas for pets in Vancouver!

Watch the full story on the kindness on Thursday’s CTV News at 6.