The Game Developer Conference is a review and preview of the game industry’s inner workings. It’s intent is to use forums, panel speakers and discussions that push the envelope of the state of the art of game development. This year, over 22,000 forward thinking, gamer professionals gathered in LA to geek out. Two of those people were Vancouverite game developers, Marcin Chady (of Radical Entertainment) and Josh Nilson (of Eastside Games).

Radical Entertainment’s Technical Director, Marcin Chady, shared with the community a feedback tool that they use during development. In a sense, the tool is a web-forum styled feedback system that’s used by team members that don’t work directly in the same department. His informative talk was called “Tapping into the Creative Collective” which discussed various sub-cultural issues that large teams encounter during development, and what Radical innovated to address the problem. You can read more about it HERE.

Video coverage of the GDC is available through GameSpot.com. It includes a live stream of the Game Developers Choice Awards. Like the Grammys, these awards are unique because the community of developers vote on whom they think lead the way in each game-related art form.

I particularly enjoyed the acceptance speeches because of the contrast of personalities between the well-spoken corporate execs and eccentric developers truly speaks to the culture. I also really enjoyed Warren Spector’s acceptance speech for the GDC Lifetime Achievement award. Otherwise, if you want to see actual keynote speakers you can visit www.gdcvault.com to see samples presentations (and their slideshow) from past conferences.

The week before the GDC I met with John Nilson, Studio Manager of Eastside Games. He was en route to LA to promote ESG’s 3 new games during the conference. He was coyly noted that he would be using guerrilla promotional tactics in true indie-game style. But, before he set off he gave me a sneak preview and tour of the studio.

Their new addicting puzzle game “Nom Nom Combo” went worldwide after a Canadian debut at the beginning of March.  It is a pick up and play game with two simple objectives; combine animals to make larger ones, and have them eat each other for coins. You can spend the coins on credits to keep playing or to buy animals that you need to make more combos. What I like about Nom Nom is that it lets you play how you want to. You should try it since it’s free for a limited time. Download it HERE through iTunes. Android compatibility is currently in the works. 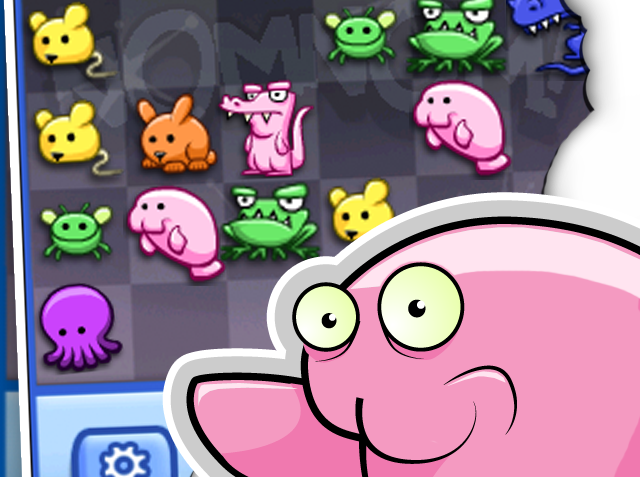 You can tell that ESG gets it. Their pre-release of each game lets them pre-test (beta test) and tweak gameplay by using fans of previous games. Their next major announcement that was promoted at GDC was their newest achievement, “Zombinis”; which is a free to play social, combat game with potential. This all-ages, turn-based game has a combat phase similar to Risk. You create ur own unique army, manage ur zombie minions, then play with them offline in story mode or online with friends. The most important aspect of the announcement is that it is  exclusively playable on Google+. You can try the game for free by going HERE.