According to a source at Vancouver’s Maison Birks, the Paris-based luxury jeweller Van Cleef & Arpels is set to open the expanded boutique just in time for the holidays. The expanded Van Cleef & Arpels will have its own dedicated entrance on Granville Street. The new boutique will replace a 300 sq. ft. shop-in-store that opened in Birks in 2006. 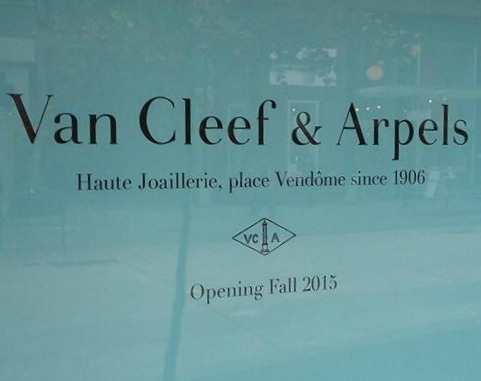 With its main entrance just off of West Hastings Street, Maison Birks is the country’s largest with its retail space spanning 20,220 sq. ft. over two levels. This historical store is located in a former bank building, and the Van Cleef & Arpels boutique’s new doorway required modifications to the historical building’s facade as shown in the photograph.

Founded in 1906 by Alfred Van Cleef and his brothers-in-law Charles and Julien Arpels on the Place Vendome in Paris, Van Cleef & Arpels is considered to be one of the world’s most prestigious jewellery brands.

In 1939, Claude Arpels opened their first boutique in New York City on 5th Avenue where it still stands today as an endearing emblem of the first European luxury companies to lay roots in the US. In the 1940s the company’s Snowflake collection was created, followed by the launch of the iconic Alhambra collection in 1968 which features the four-leaf clover.

Today, this luxury brand lends its fine jewels to some of the biggest designers’ fashion shows such as newcomers Gareth Pugh and the legendary Karl Lagerfeld. The company has store locations worldwide and in the US, it operates freestanding locations as well as concessions within selected Neiman Marcus stores.