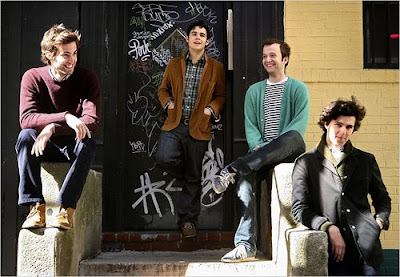 Update: Second show added for August 27th at the Malkin Bowl. Presale tomorrow!
Vampire Weekend will be coming to Vancouver towards the tail end of summer to perform at  he Malkin Bowl in Stanley Park (is it just me, or is the Malkin Bowl concert series particularly strong this season?). For the many people wondering, Vampire Weekend’s name comes from lead singer Ezra Koenig’s amateur film of the same name.
This NYC indie rock band is still under the radar enough to not be shunned by the “if it’s popular, then it’s not good music” crowd. Although, give it time and this band has all the ingredients to break out big time and never look back. Their tunes are catchy, rhythmic and often quick. Listening to Vampire Weekend is surely to cheer one up.
The band has been around since 2006 and have released two full length albums, a self-titled debut and Contra. Their most notable hit to date has to be “Cousins”. My personal favourite at the moment is “Campus” but the changes on a weekly basis.

Check out the video for their second single from “Contra”, “Giving up the Gun” which features cameos from RZA, Lil’ Jon and Jake Gyllenhaal, amongst others.

Who: Vampire Weekend with special guests Beach House and Dum Dum Girls
When: Saturday, August 28
Where: Malkin Bowl in Stanley Park
Tickets go on sale Friday, May 21 at 10am. Tickets are $39.50 plus service charges at www.ticketmaster.ca or at Zulu and Red Cat Records. Tickets are General Admission. All ages show.