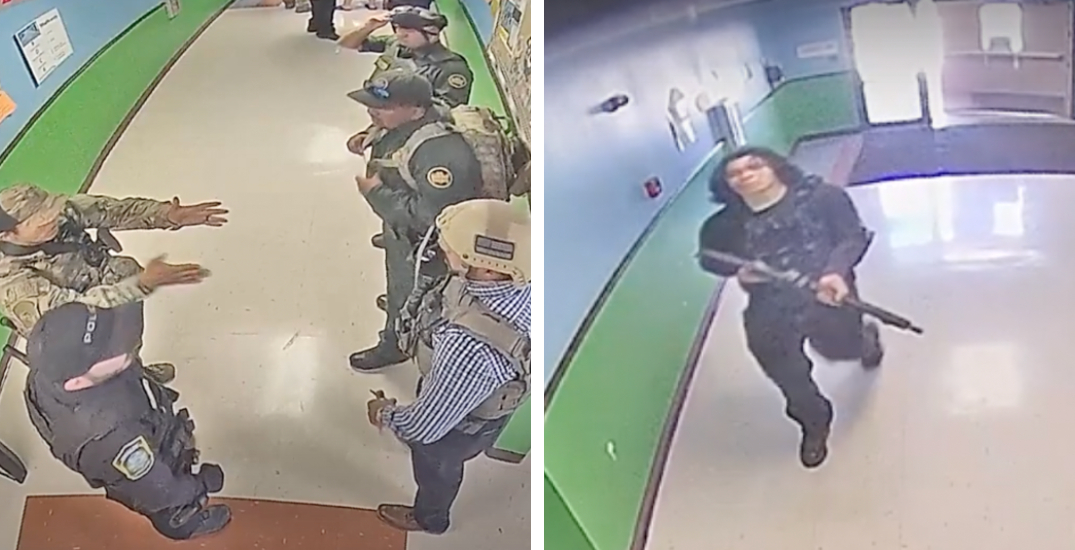 Newly leaked footage shows all the things officers were doing while responding to the Uvalde school shooting, which left 21 dead, in May.

On May 24, 18-year-old Salvador Ramos opened fire at Robb Elementary School in Uvalde, Texas. Police took a long time taking Ramos down, and now, an 82-minute video shows officers via two angles — one being a CCTV camera in the school’s hallway and the other being a body cam strapped to one of the officers.

People are outraged at the level of slack shown by the police officers, who were texting, sanitizing their hands, having conversations, and even fist-bumping while the 19 children and two teachers were being massacred.

The footage was obtained by Austin American-Statesman and posted to their YouTube channel on Tuesday.

It also shows Ramos entering the premises with a rifle in his hand and while the sound of children screaming has been censored, you can hear him fire gunshots while police officers stand outside, texting, fixing their sunglasses, and sanitizing their hands inattentively.

The parents and loved ones of those who died in the Uvalde school shooting are furious about the footage leaking before they had a chance to view it. In a CNN video, some parents can be seen addressing Congress in tears.

“We’re angry. We’re very angry and we want justice for our kids. For this [footage] to be let out without us even being seen first… We’re the parents who lost out children!” said Felicia Martinez, the mother of 10-year-old Xavier James Lopez. She added that the parents should have been able to see the footage before the rest of the world.

“To the person that leaked this, screw you,” she concluded.

Angel Garza, the father of slain student Amerie Jo Garza, also voiced his anger at the leak. “I don’t care if you’re a DA, you’re a spokesperson, you’re a councilman, you’re a senator — who do you think you are to release footage like that of our children, who can’t even speak for themselves? But you want to ahead and air their final moments to the entire world? What makes you think that’s okay?”

The group of guardians and parents revealed that they’d been asking their district attorney for the footage.

“She refused to let us see it,” Nikki Cross, the aunt of 10-year-old victim Uziyah Garcia, told reporters. “Once again, the world got to see it before us, just like the day of the shooting, when Governor Abbott announced to you all that our children were dead, and we had no idea.”