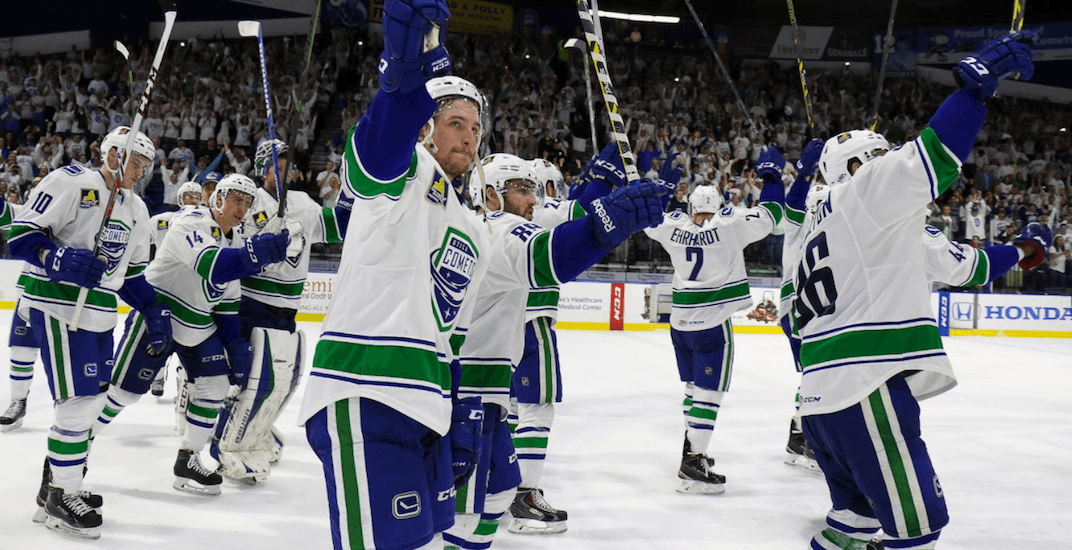 The Utica Comets are the hottest ticket in the AHL.

The Canucks’ farm team has been a hit in upstate New York, playing to energetic crowds from the get-go when they launched in 2013.

They reached a fever pitch in just the team’s second season, when a group that included current Canucks Travis Green, Jacob Markstrom, Sven Baertschi, Brendan Gaunce, Jake Virtanen, and Alex Biega made it all the way to the Calder Cup Finals.

Since their playoff run in 2015, it’s been back to normal on the ice, with Utica losing in the first round in 2016 before missing the playoffs entirely last season.

This year, Utica is off to a 8-9-1 start, with Nikolay Goldobin, Reid Boucher, and Michael Chaput atop the team leaders in scoring.

But off the ice, it’s been a tradition of excellence for the baby Canucks.

A sellout streak of over 100 games – including regular season and playoffs – has the franchise chasing history. They’ve sold out 87-straight regular season games, which is not far off the record of 120, held by the St. John’s IceCaps between 2011 and 2014.

There’s not enough games left to eclipse the mark this season, but it could happen early next year.

The Comets’ home arena, known as the Adirondack Bank Center at the Utica Memorial Auditorium since a naming rights deal was finalized in September, has increased in capacity in recent years to deal with the demand.

A 26,000-square foot addition in the offseason increased seating capacity to 3,917, which is still undersized by league standards.

Utica’s fan support has been rewarded with the 2018 AHL All-Star Game, which will take place at the end of January.

The success story that is the Utica Comets helps explain why the Canucks have been reluctant to move their AHL affiliate elsewhere. There’s been talks of moving the Comets to Abbotsford ever since Calgary moved their AHL team out of the Fraser Valley in 2014.

While having their AHL team on the other side of the continent, far from major airport hubs, isn’t ideal – there are a lot of positives. With many teams in close proximity, the Comets have an easy travel schedule.

Despite the fact that the AHL has recently moved teams westward into California and Arizona, a team in Abbotsford would still have the worst travel schedule in the league.