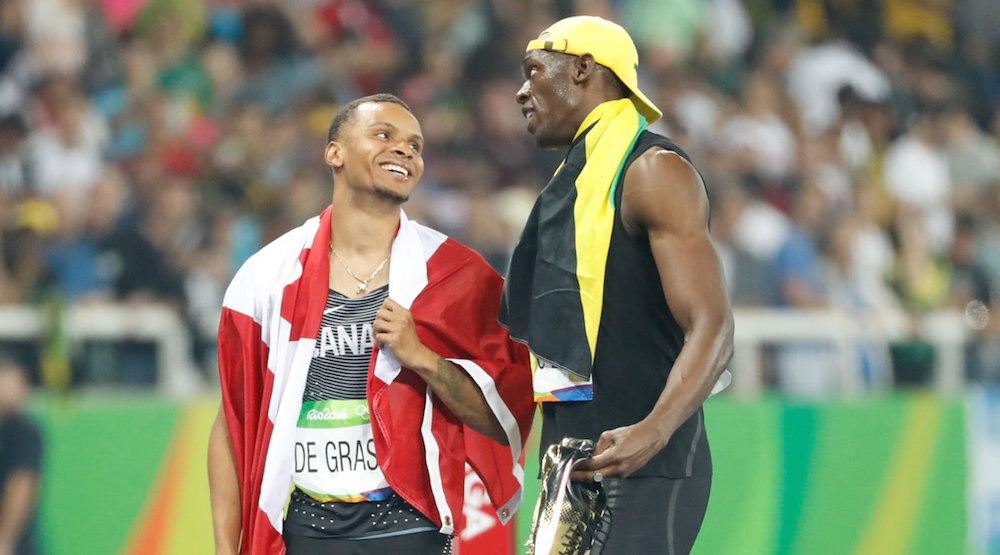 With Usain Bolt nearing the end of his career, speculation continues to grow over who his heir apparent will be.

It’s unlikely that anyone will ever be as dominant as Bolt, arguably the greatest athlete of all-time. But with the 30-year-old Jamaican racing for the final time at the 2017 World Athletics Championships – which kicks off Friday in London – the title of ‘fastest man in the world’ will soon be up for grabs.

For many, 22-year-old Canadian sprinter Andre De Grasse is the man to take that crown, particularly after he won bronze and silver in the 100-metre and 200-metre events at last year’s Olympics in Rio.

The world smiled as they bromanced their way through the heats in Rio last year, and it appeared Bolt took a liking to the Markham native.

Well, not so fast.

On Tuesday he was asked again by a reporter in London who he thinks will take over as the fastest man in the world when he retires, and this time Bolt didn’t tip his hand. And he also hinted that he’s not terribly happy with little Canadian buddy.

Who disrespected him? He had to mean De Grasse.

Credit to the young Canadian, he hasn’t been afraid to tug at Superman’s cape.

“I’m trying to win this year,” De Grasse told the Associated Press prior to the 2017 season, not content to wait for Bolt to retire. “I feel like I have a great chance and that’s what I want to do.”

If that didn’t cool the bromance, comments from De Grasse’s coach Stuart McMillan last month probably did. McMillan accused Bolt of “booting” him from the 100-metre race in Monaco.

“We were in the [100-metre] race. We got booted out. That’s all on Bolt,” McMillan said. “Let’s just say he wanted not such an elite field against him.”

Despite the bromance hoopla in Rio, Bolt actually expressed displeasure with the upstart Canadian last summer after De Grasse tried to push to win the Olympic 200-metre semi-final heat.

“Andre was supposed to slow down. He didn’t,” Bolt told the BBC. “I said: ‘What are you doing, it is the semi-finals?’ He said he had to push me.”

Everyone has the utmost respect for Bolt, a living legend with eight Olympic gold medals on his resume. But Canadians have to love De Grasse’s enthusiasm and his competitive fire.

Bolt is the best of all-time and De Grasse wants to beat him. And that’s how it should be.

Bolt will not race in the 200-metre event in London, instead choosing to focus on the 100-metre and 4×100-metre races. The 100-metre final goes on Saturday, August 5, while the relay takes place on August 12.