The Abbotsford International Airshow has announced an exciting new addition to its 2015 lineup: the F-22 Raptor, the US Air Force’s newest fighter aircraft that boasts some of the greatest advances in fighter jet technology.

Major John “Taboo” Cummings of the US Air Force will be flying the plane in this year’s demo and says that getting the Raptor is a big deal for any air show. The F-22 demo team, which includes Cummings and Technical Sergeants Harrison Southworth and Jonathan Billie, performs only 20 shows per year. Cummings says he and his team are excited to be the first to bring this plane to Abbotsford.

The F-22 is no doubt an impressive machine, and as Cummings puts it, “the latest and greatest air-to-air fighter out there.” Its capabilities can be broken down into four categories: stealth, speed, avionics, and maneuverability.

From an audience’s perspective, however, maneuverability will be of most interest. Cummings says the incredible advances in this feature allow the plane to do things that you just wouldn’t expect a sixty thousand pound aircraft to be able to do.

“The impressive thing about the raptor demo is that the jet never gets that far away, because of the maneuverability of the airplane and the way the demo is orchestrated, everything happens right in front of you.” 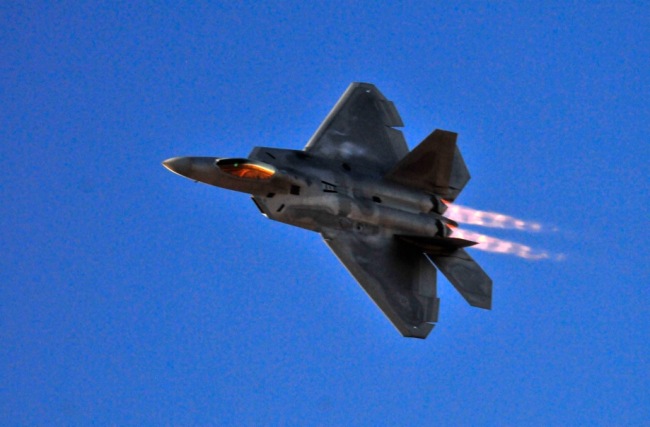 The aircraft will be participating in a Heritage Flight formation, in addition to its solo demo. The audience can expect to see the jet do some amazing things at the hands of Cummings, including flips and vertical acceleration, where the jet flies straight up and does a controlled backward fall. Cummings says the demo will undoubtedly give spectators something they have never seen before.

Technical Sergeant Harrison Southworth added that he can not stress enough the importance of audience members taking into consideration how they dress for this year’s event.

“I’m really pushing to get the message out there to just not wear socks for the Airshow. If you come to the Airshow with socks, we are going to knock them clean off.”

The F-22 Raptor adds to the already impressive lineup for the 53rd Abbotsford International Airshow – which now includes three jet teams and three fighter jet demonstrations. In addition to the excitement up in the sky, there will also be attractions on the ground, including a display aircraft, food trucks, licensed areas, and an autograph booth where attendees get the chance to meet pilots and crew.

Written by Alison Kroeker – a contributing writer for ValleyBuzz with a degree in Environmental Sciences from the University of Alberta. Follow her on Twitter @AlisonKroeker