A Vancouver dog rescue project that is preparing to fly more than 100 death-row dogs into the city from California, has shut down its application process after being overwhelmed with applicants.

The dogs, which are being brought in to Canada by Thank Dog I Am Out, are due to arrive at YVR on November 7 as part of a follow up to a similar event that was organised last year in Bellingham.

The group had asked would-be dog parents to go to its website to fill out a pre-approval application. Applicants must undergo a home visit before they are granted access to the upcoming airport event, where they can meet the homeless pups and see if one will make a suitable match for their family. The pups cost $375, which includes the cost of the flight, spay/neutering and vaccinations.

TDIAO founder Susan Patterson told Vancity Buzz they’ve had to cap the applications at 150 people because they have been arriving “non-stop” for weeks.

“We’ve had applications from Nova Scotia and Halifax and Calgary,” she said.

Patterson, who is currently in California visiting shelters, says they will send up to 120 dogs, including 30 more from the Humane Society in El Centro, California. The shelter is designed to house 80 to 100 dogs, but currently has 500 and is struggling to keep up, she says.

“They are trying to save some of the nicest dogs I have ever laid eyes on but they get 20 to 40 surrendered a day. Maybe 10 are adopted,” she said. 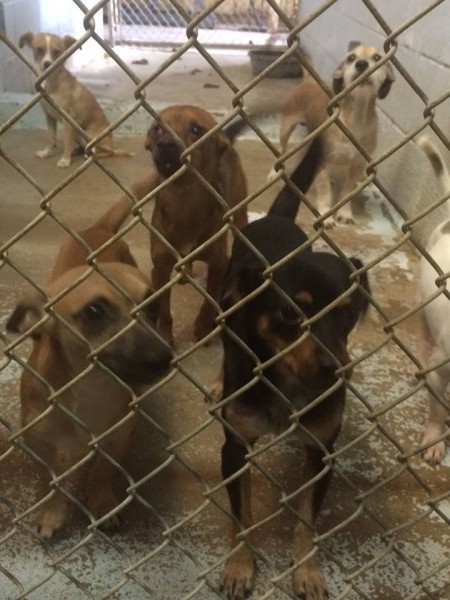 A dog at the Humane Society in El Centro, California, where TDIAO is pulling strays. (Facebook)

TDIAO is telling all new Vancouver applicants to “hang tight” and they are currently attempting to stage another event before Christmas.

Their mass adoption may be wildly successful, but it’s not altogether popular. British Columbia animal rights groups, including Paws for Hope, say B.C. dogs should be adopted before ones from outside the province, and it has major concerns about mass adoptions like this one.

Executive Director Kathy Powelson adds that dogs in rural areas of B.C. meet just as cruel a fate as those in high-kill pounds in America.

“Want to know why they are not from a ‘kill’ shelter? Because they are from communities with no shelters and so they are shot and drowned,” she said in a Facebook post Monday.

Powelson believes the mass adoptions don’t solve the problems in the communities where the animals originate, like overpopulation and neglect. Her group also questions how dogs and adoptive families can be properly vetted if they are importing such a large volume of animals.

TDIAO disputes that assertion. After last year’s event in Bellingham, only two dogs were surrendered back to them – both of which were re-homed almost immediately. The group says it has a large network of short-term fosters that can house the dogs if something happens, but it hasn’t been an issue.

To Thank Dog I Am Out, the controversy comes second to its ultimate goal: saving lives.

“Hundreds of people have made it very clear — we need to keep doing this,” said Patterson.

A quick search of Petfinder.com finds more than 200 adoptable small dogs within 160 kilometres of Vancouver. If you are looking for a new furry friend please consider adopting one of these homeless souls. 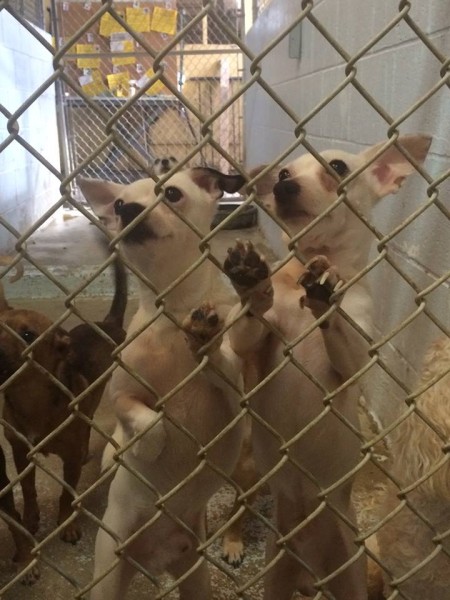 A dog at the Humane Society in El Centro, California, where TDIAO is pulling strays. (Facebook)