Detectives continue to investigate the recent violent sexual assault that occurred in the area of East 45th Avenue and Rupert Street just before midnight on Saturday, October 25.

Through further victim and witness interviews, investigators now believe the suspect to be a man in his  mid-to late-40s, described as Middle-Eastern, approximately 6′-6’2″ tall, 250 lbs., with a heavy solid build. He has an olive skin tone, spoke with an accent and was balding with a short, shaved black fringe of hair around the sides and back of his head.

The police have released a sketch of the suspect: 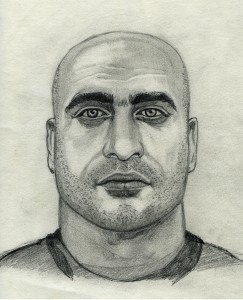 The vehicle he used was described as an older model dark bluish-green coloured minivan with a sliding door on the passenger side and dark tinted windows along the sides.

Investigators are once again appealing for witnesses to come forward, as it is believed that two vehicles passed along East 45th Avenue around the time of this incident.

Anyone with any information regarding the identity of this suspect or whereabouts of the vehicle is asked to contact the Vancouver Police Sex Crimes Unit at (604) 717-0601 or Crime Stoppers at 1 (800) 222-8477.