It’s become an annual tradition: Gorging yourself on outlandish–and often deep-fried–food creations at the Fair at the Pacific National Exhibition (PNE). Traditionalists can appreciate the abundance of familiar fare, from corn dogs to the PNE’s beloved mini donuts, while vegetarians and those who keep gluten-free diets will find an impressive array of tasty options.

From burgers that use donuts as buns to ice cream made with beer and a whole lot of bacon and red velvet to go around, here are nine unique foods to check out at this year’s Fair at the PNE.

You’ve had a stack of pancakes drizzled with maple syrup and a side of bacon, right? The Maple Bacon Donut Burger at the Kansas-based Stremmel family’s Fried Veggies Stand melds sweet Canadiana (maple frosted donut) with an American classic (a bacon cheeseburger). 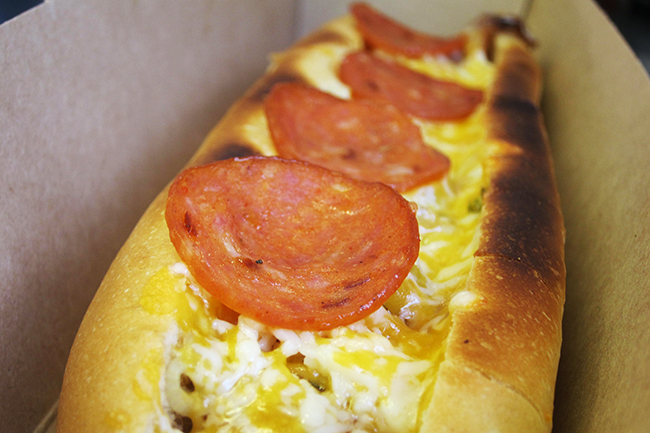 At this new incarnation of the venerable Foot Long Hot Dog Stand, run by the family of the late PNE icon Jack Hunter who died earlier this year, their well-known long dogs can come as simply adorned as with a fresh grilled onion topping and all the condiments you care to squeeze, or in some more out-there version, like the Pizza Dog, or its artery-clenching cousin, the Bacon Wrapped Pizza Dog. The later comes with melty cheese and pepperoni slices on top. 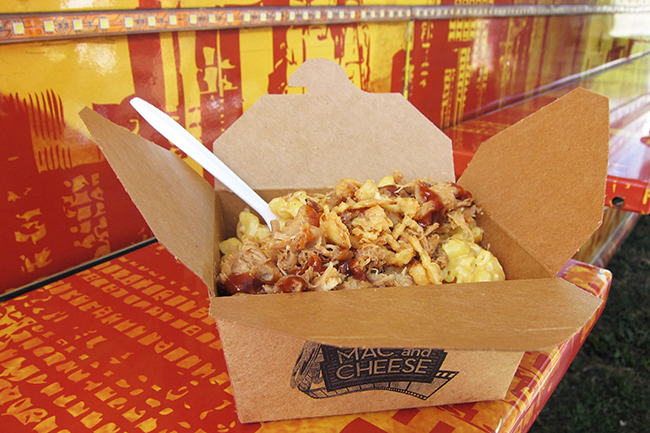 The Reel Mac and Cheese Truck is a local favourite. Run by husband and wife team Perry and Suzanne Pourier, their base mac and cheese is a comfort classic, and is made with seven types of B.C. cheese. They name their dishes after movies, so this year’s new offering is the dino-mite Jurassic Pork, which is mac and cheese topped with pulled pork. 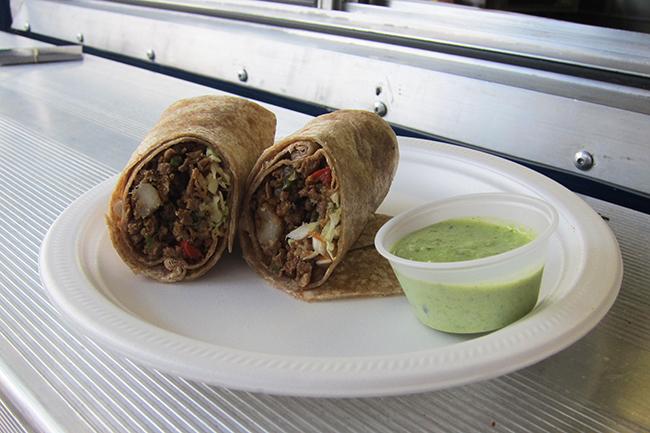 Curry-In-A-Hurry has been at the PNE for 35 years now, and they continue to spice things up with their fun takes on Indian fare. If you’re opting for meat-free eats with lots of flavour, seek out what is often called their “Cur-rito” (curry plus burrito) a whole wheat wrap full of veggies and seasoned soy-based filling. 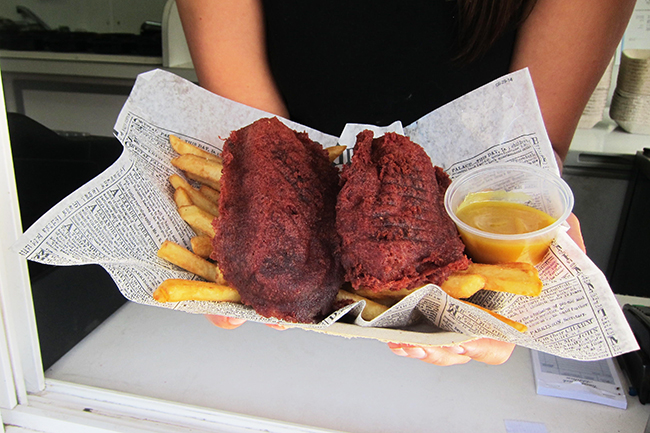 Chicken strips get taken to the next level at Pub Grub, a stall that throws traditional UK-inspired fare for a very “fair” loop. Using their funnel cake batter, the chicken strips are enveloped in a deep red crispy coating, and can be dunked in some tangy sweet and sour sauce. 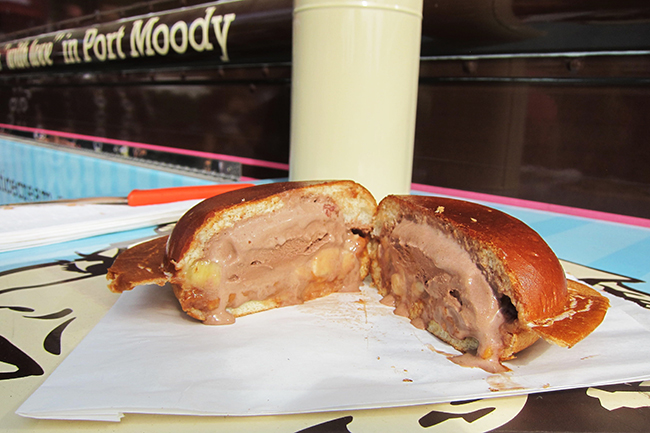 A new addition to this year’s Fair at the PNE, Port Moody’s Rocky Point Ice Cream is scooping up their delicious small batch hand-churned ice cream in exciting flavours. Not to be missed–at least for the grown-ups–is their Beer Ice Cream, which they make using different beers each time. For those who want to skip the scoop, Rocky Point came up with the Fat Elvis, a “grilled freeze sandwich” that puts chocolate ice cream, strawberry jam, banana, and peanut butter crunch in between a grilled brioche bun. Named in honour of The King’s PNE concert in 1957, it’s a testament to why we don’t go around eating things called the “Skinny Elvis.” 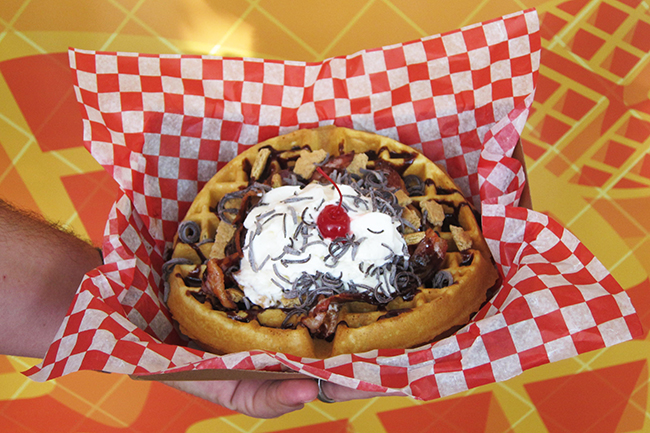 Waffles are awesome. S’Mores are awesome. Bacon is…you get the drift. Put all three together and you have a pretty incredible creation. The PNE’s new Waffles with Benefits stand is doing stuff like Chicken and Waffles, but it’s their sweet-savoury mash-up that really takes the cake. 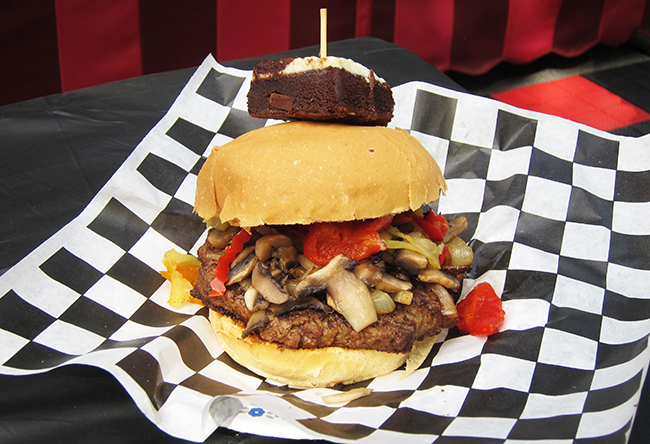 Pretty please with a brownie on top: Gourmet Burgers has been showcasing rare and unusual meats on their burgers for the past dozen years at the PNE (Alligator, Camel, or Python, for example), but they’ve got a showstopper in the form of the Wizard, which is comprised of a sirloin beef patti, Cheez Whiz, roasted peppers, caramelized onions, sautéed mushrooms, banana peppers, and a chocolate brownie skewered on top. Veggie lovers, you may want to seek out their Cactus Burger, which is a meat-free option featuring the Mexican staple 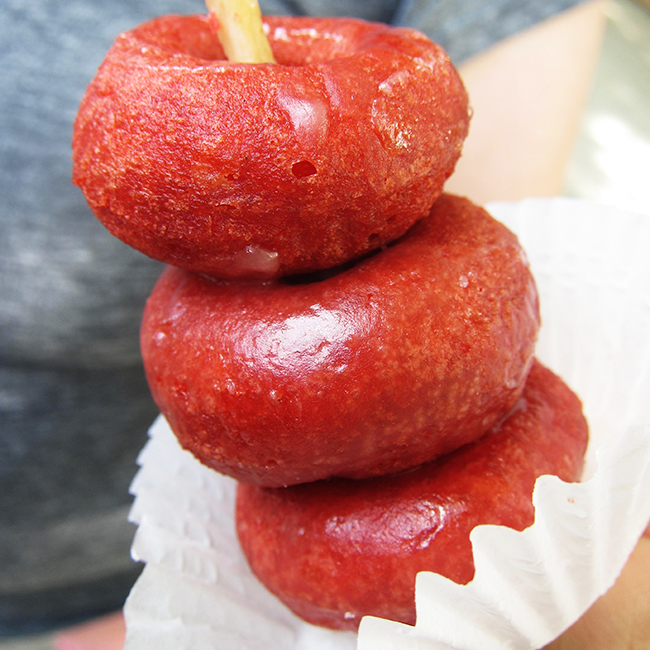 Mini Donuts are one of the PNE’s enduring classics, and at Mini Donut Factory they are tapping into some hot food trends with their Red Velvet Mini Donuts with Cream Cheese Glaze. These tiny cake-y, sugary gems come filed on a skewer, which makes them perfect for sharing while you meander the Fair. And after all that eating, you’ll definitely want to take a stroll to burn off some calories.

The PNE has a complete list of all 2015 PNE food vendors to help Fair-goers plan out their eating. The 2015 Fair at the PNE runs now through Monday, September 7.