Well after the success and agreement Vancouver seemed to share with the Vancity Buzz “Guide to Bus Etiquette” and after a few stitches and poked eyeballs later, I think it’s time to share some UMBRELLA ETIQUETTE before we head in to the bulk of the rainy weather season.

Do You Really Need a Golf Umbrella? Nope 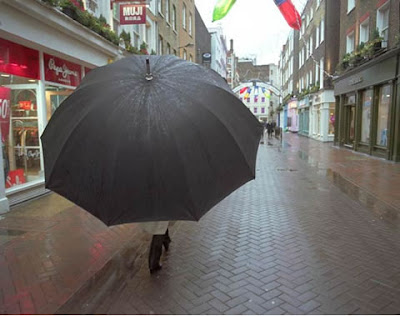 Unless you’ve been accused of having sexual relations with any and every call girl in Vegas and have forfeited over 70 million dollars in a divorce to a former Swedish model then there’s really no need to walk around with a gigantic Umbrella only fit for a golf course that could literally cover 10 people. I’m also no scientist but pretty sure it’s not acid rain falling from the sky and if a drop happens to get on your $1500 jacket you will live, contrary to what the sales person told you. Unless you’re trying to catch a sweet wind and Mary Poppins your way to your destination, please use an Umbrella of a reasonable size and remember bigger isn’t always better.

Rain is a Liquid it Won’t Pass Through a Solid, like a Roof
When walking in a covered area down the street, let’s say outside the Bay on Granville/Seymour downtown there is ZERO need for you to keep your Umbrella open. Maybe I could understand having it open in that specific area during the Olympics in case a protester trying to spit on a police officer missed and hit you but otherwise please close your umbrella when you are covered by a roof or bus shelter. Oh and although this point is more obvious than betting that Katy Perry would be flaunting her breasts on Sesame Street, I’ve seen it happen; if it’s not even raining out put away the Umbrella or I’ll put it away for you. (very nicely folded up and in your bag like the gentleman I am and please note I am not saying the Katy Perry thing is a negative)

Since You Aren’t Wet Your Umbrella Probably IS!
When you finally get inside or on the bus or where ever it was you were going please take in to account that your Umbrella is probably very wet so violently shaking it like Mel Gibson shaking a baby is only going to result in you and everyone else around you getting wet which really defeats the purpose of carrying around your Hello Kitty Umbrella in the first place. If you are getting on a bus please don’t leave your Umbrella on the seat next to you not only are you taking up a seat for no reason (we went over this last time) but the next person to sit down won’t be able to tell whether its pee or water they’re sitting in…it’s a 50/50 toss up most of the time on the bus.

Keep Your Head Up!
We all get a little grumpy when we wake up in the morning, its grey and dreary outside,y our cat threw up on the carpet from eating too much string, you’ve stepped in 3 puddles and you’re stuck with several meetings you’ll struggle to stay awake in during the day. But that’s no excuse to walk around with your Umbrella and head pointed down like you’re admiring the job you did zipping up your pants this morning. You will run in to people who maybe don’t have an umbrella and maybe they can’t dodge out of your way in time so they end up losing an eye or even worse, messing up their hair. Secondly you may also run in to someone else not paying attention which will likely turn in to an uncomfortable and dangerous game of Umbrella bumper cars which with enough Asian people around could quickly turn in to a Kung-Fu sword fight using the Umbrellas in the middle of the street. (Mind you I would’ve mentioned white people being involved in the sword fight but they’re too busy complaining about this joke being racist in the comments below)

If Your Umbrella Secretly Turns in to a Machine Gun
Please reply in the comments with how we can all obtain one, because I’m pretty sure if the next time you jab someone in the eye with the pointy spoke of your Umbrella resulted in them turning around, changing their Umbrella in to a machine gun and screaming “Say Hello to my little friend” while blasting you silly…well you’d at least think twice.

Yes, You Look Stupid No Matter How Dry You Are 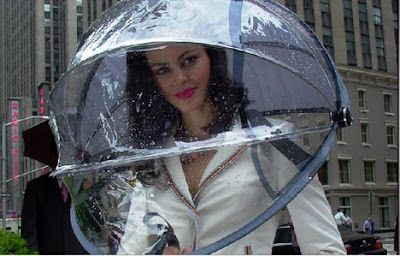 Besides the fact this chick is super hot, she looks super dumb and so do you if you own an Umbrella like this even if it keeps you dryer than being hit on by 5 guys sporting Ed Hardy. Mind you this is not really an etiquette tip as much as it is a helpful reminder that when you wear something like this, any alien life that may be looking down on us is not only watching us pick up dog poop but also seeing us dressed in some kind of get up that makes us look like a bunch of “Bubble Boys” who can’t survive on our own planet.

Now if you were able to read through all this without getting “Umbrella” by Rihanna stuck in your head, kudos…but if you weren’t so lucky. Here you go