The world is watching as the “Umbrella Revolution” continues in Hong Kong. One group that has been particularly vocal in their support in Vancouver has been the UBC Hong Kong Student’s Association (HKSA).

The group held the “ Operation Yellow Ribbon” student campaign at UBC on Wednesday to show solidarity towards the protesters in Hong Kong.

Vancity Buzz caught up with HKSA’s president, Patricia Poon, to learn more about the protests in Hong Kong and how the work that the HKSA is doing to create awareness and advocate for the cause here in Vancouver.

VCB: Can you tell us a little about the protests in HK and why they are happening?

Patricia: Hong Kong has never been a truly democratic state. However, the handover from Britain to China in 1997 caused a lot of emigrants to Canada, my entire extended family included. Most of them have now returned to Hong Kong, which proves to be a stable and prosperous city today.

China has been promising a more democratic system in Hong Kong for over 17 years. In the current system, 1200 delegates, vetted by the Chinese government, vote on three Chief Executive candidates (also approved by the government). Recently, China has abolished the role of the delegates, allowing the people of Hong Kong to vote directly on the candidates. Students are protesting because China still insists on selecting the three Chief Executive candidates for the election of 2017.

Many of the HKSA’s  members have expressed an interest in flying back to support the protests. It’s been 17 years since China has promised a more democratic Hong Kong and they have taken steps in the right direction. However, students are restless and are asking for a completely democratic system. To some students, this protest is very justified. To others in our parents’ generation or business owners, the political unrest is unnecessary.

VCB: What is the HKSA doing on campus to support for HK and how are you informing the wider student population of what is happening?

Patricia: On October 1, in solidarity for the students protesting on the Chinese National Holiday, UBC HKSA joined the global “Yellow Ribbon” student campaign, which originated at Harvard University. We handed out yellow ribbons to over 500 people and provided poster boards and markers, encouraging students to share their thoughts and words. We will be displaying these boards around campus for the next week.

We have been covered on Global, CTV, CBC, Omni News, Fairchild TV, the Vancouver Sun, and countless other English and Chinese media outlets. The most important thing to remember is that students are standing together for a more democratic Hong Kong. That is the point of the movement and the message we want to send – not to criticize China or the Hong Kong police.

We offer full support to Hong Kong students and their spirit. It is ultimately for the people of Hong Kong to decide what is best for them in the upcoming days. In Vancouver, the best way to support Hong Kong is to raise awareness, and to help their message gain momentum in these crucial several days.

VCB: What has been the response from students you have talked to about the issue?

Patricia: Students at UBC have been largely supportive! All it’s taken is a couple steps and “Would you consider wearing a yellow ribbon to support democracy in HK?” – earphones come out, huge smiles split across their faces and they accept.

We tied over 275 metres of yellow ribbon to wrists and backpacks. Students donated yellow flowers and a yellow umbrella for the statue of the Goddess of Democracy on campus.

However, a small number of students disagree with the protests and decline the ribbon, but have shared thoughts with us on our poster boards. Some believe that China has been extremely accommodating to Hong Kong’s demands for democracy over the last 17 years – we must remember, after all, that Hong Kong is a city, not a country.

Do you have any family back in HK? If so, have they updated you on what is going on in terms of the protests on a daily basis?

Patricia: My entire extended family lives in Hong Kong. The older generation largely dismisses the protest as irrational – having lived through true political turmoil, the luxury of peaceful protest is unheard. Citizens are supporting the students but some just wish they would get up and go back to school. Also, many business owners are concerned about Hong Kong’s economic standstill for the past week. 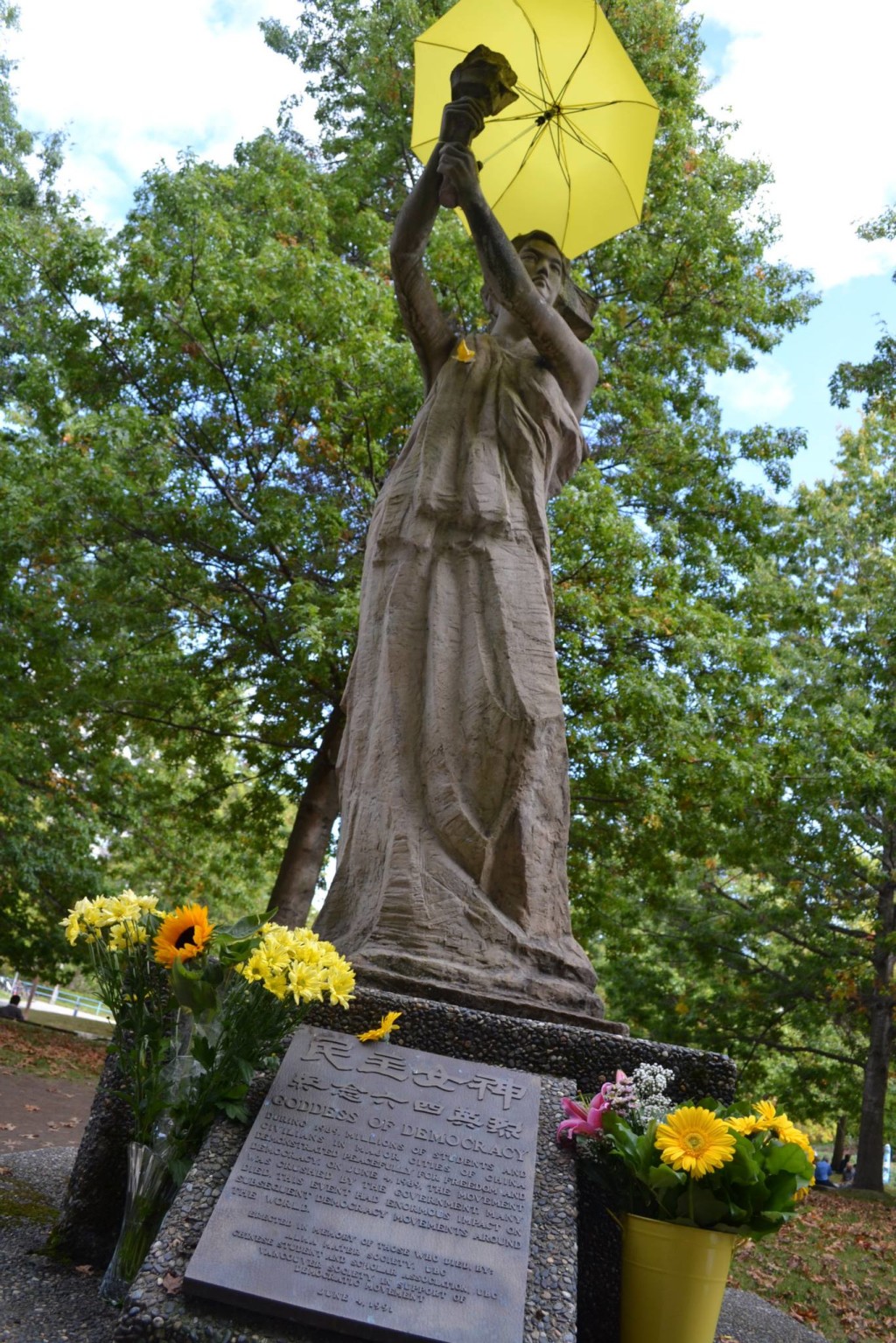 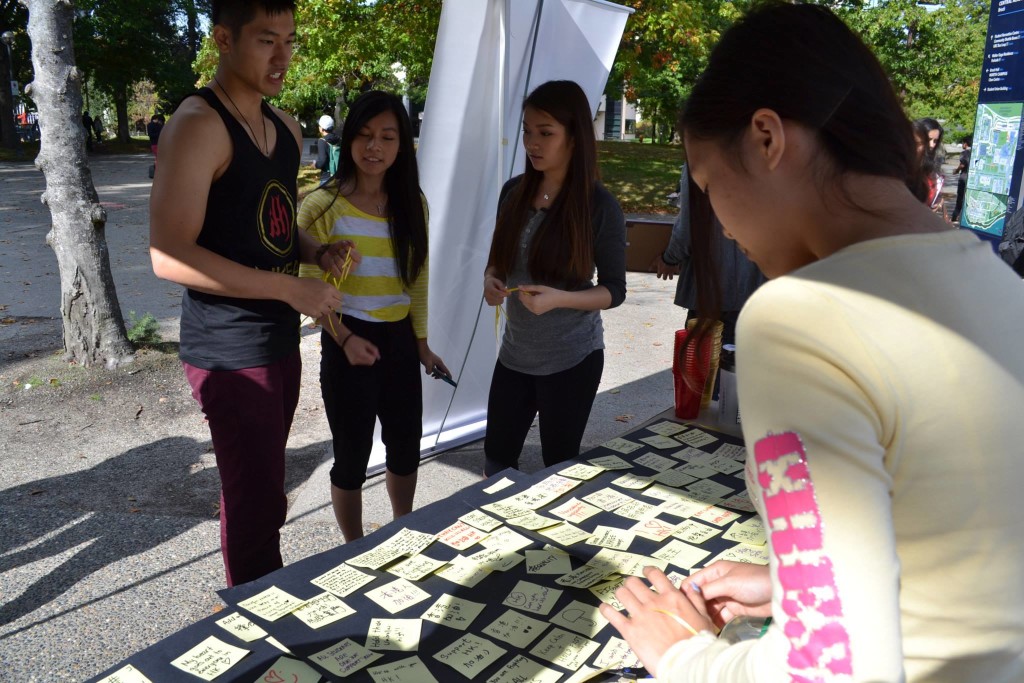 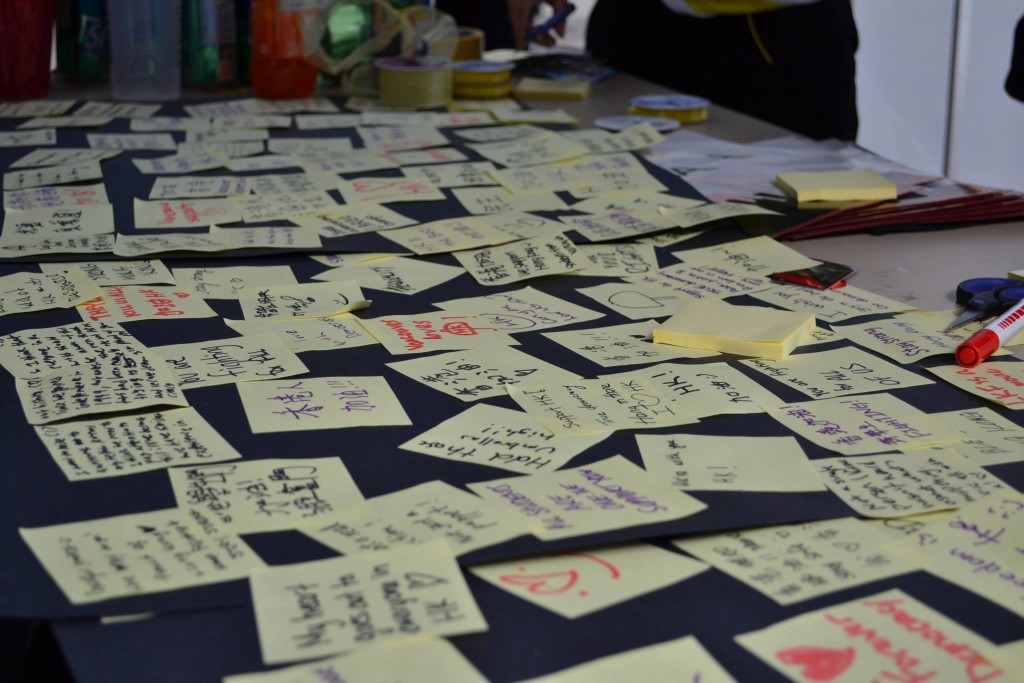 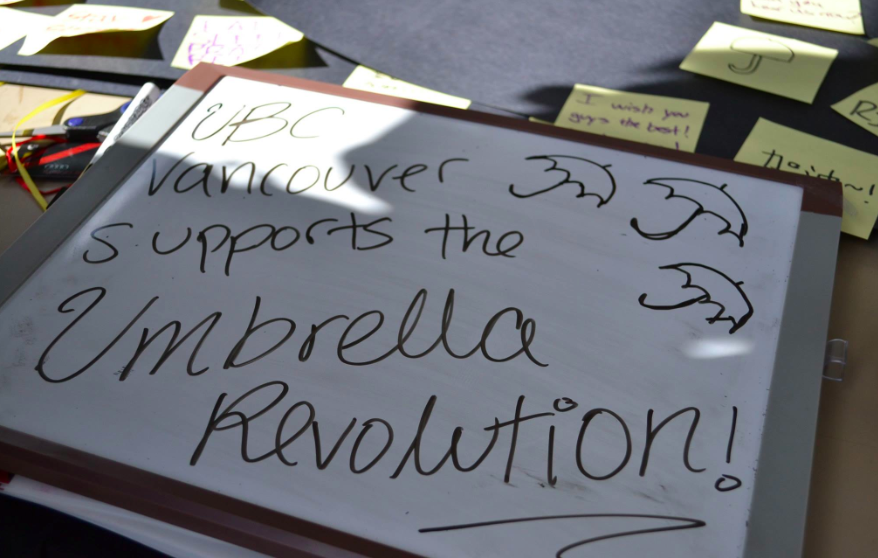