Sustainability and green design are some of the key principles of the new buildings constructed at the University of British Columbia’s Vancouver Point Grey campus, but one upcoming project will stand out among the dozens of buildings recently constructed or planned.

Over the summer, the university issued an Express Of Interest for architectural firms to design a wood-based high-rise tower between 16 to 18 storeys. At a height of 53 metres, it will be the world’s tallest wooden building of its kind.

The mixed-use student housing wooden tower will include new academic space, up to 400 beds for upper year and graduate students, and student amenities – all in a floor area of 157,000 square feet.

In lieu of steel and concrete structures, tall wood buildings are built out of laminated lumber beams that are glued together under pressure. Proponents of tall wood buildings claim that while a wooden tower may appear to be a fire hazard, such structures are in fact safer than steel as charred wooden surfaces protect the structural wood underneath whereas steel structures are weakest at the points of where it supports a post.

While wooden structures are common for low-rises, it is a highly uncommon form for taller buildings. In 2012, Vancouver-based Michael Green Architecture unveiled a conceptual design of a 30-storey wooden building as part of a feasibility study that “demonstrates that wood is a viable material for tall and large buildings alike.”

Tall wooden buildings have also been envisioned in Sweden, Norway and Austria, but only one proposal has been realized: a 14-storey, 51-metre tall building under construction in Bergen near Oslo. The current tallest wood building in the world is a 10-storey, 32-metre tall apartment complex in Melbourne, Australia.

UBC aims to complete its wooden tower with a minimum LEED Gold certification. The project will cost $30-million and is scheduled for September 2017 occupancy.

The Brock Commons is just one of five student housing complexes planned for the campus over the next three years.

This includes the $165.5-million Ponderosa Commons and $127-million Orchard Commons: two mixed-use projects that will add academic and office space, amenities and a combined 2,200 student residence beds. Over the long-term, additional student housing complexes are proposed for the site of the Old Armoury and a vacant site adjacent to the Health Sciences building. 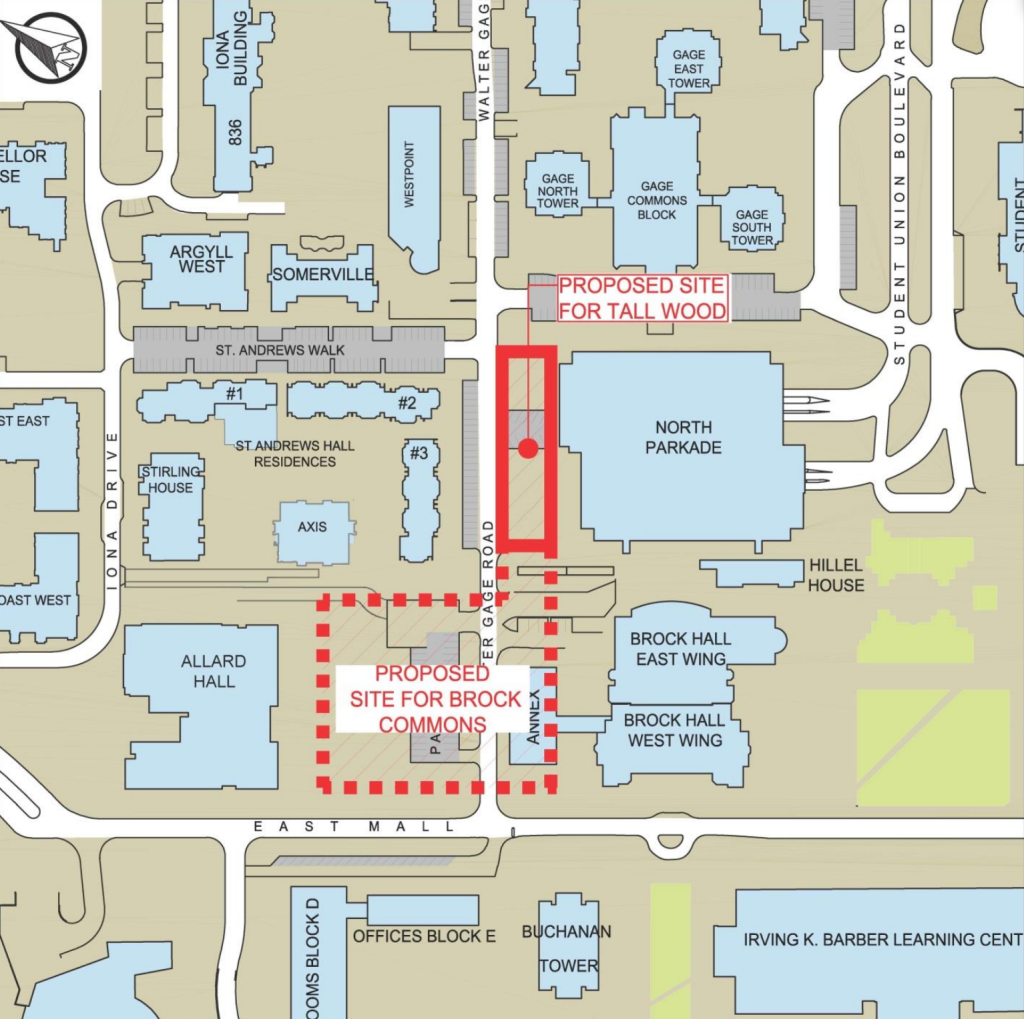