The page which exists “to represent the interests of white students on campus” was created last night, November 22 and the group claims their existence is necessary because white students are now an ethnic minority on campus.

“Unlike other ethnic and cultural groups, we have no organized lobby for our interests. Some have replied that this is unnecessary because there are many white people present in the university’s administration and student union. We believe that this is illegitimate on its face. There are many Chinese individuals present in business and political institutions in Vancouver; does this mean that they represent Chinese people and their interests? To assert such a thing would be reprehensible,” reads a press statement issued on the page.

Another post says “We seek to honour our past while promoting a positive, peaceful vision of the future; one in which every ethnic group has the right to organize and represent themselves and their interests.”

Many commenters have expressed both feelings of support and disgust at the page’s existence.

In the very first post on Facebook, the group claims to “affirm the dignity and ancestry of our proud people who have gifted the world with countless works of beauty, science and wisdom.” 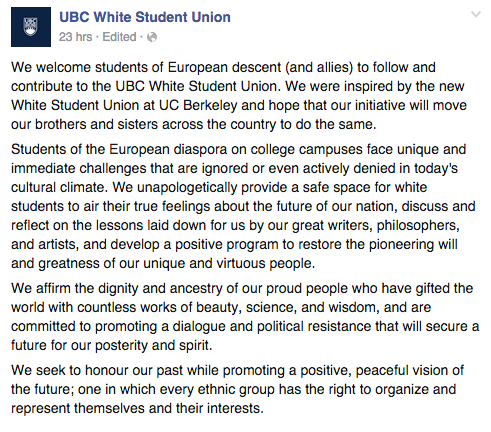 The UBC incarnation isn’t the first white student union to pop up this weekend. Medium reports other universities in North America have had similar groups created, with strikingly similar descriptions. 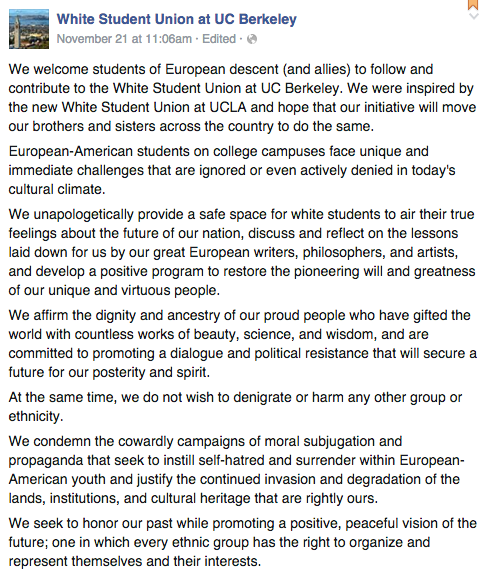 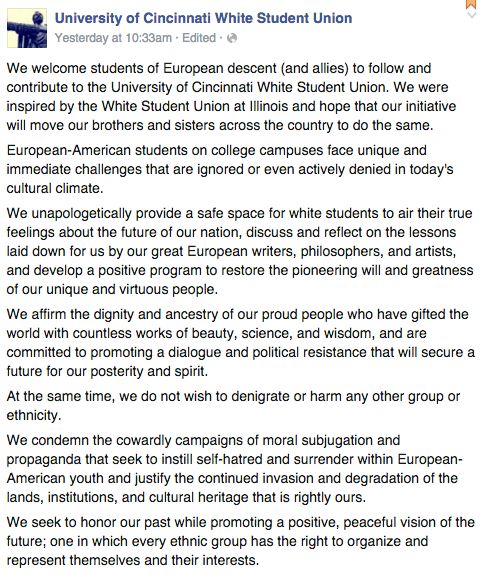 Medium says over 30 of these groups have come up over the weekend.

UBC sent an email statement to Vancity Buzz saying they are in no way affiliated with the Facebook page.

Several members of the UBC community made us aware of the Facebook page “UBC White Student Union.” This is not a UBC operated or sanctioned page, nor is it an organization recognized by or affiliated with UBC. UBC is not responsible for the content on this page and does not endorse its content. Given the confusion caused by the use of UBC trademarks on this page, UBC will be requesting that this organization cease using UBC’s trademarks.