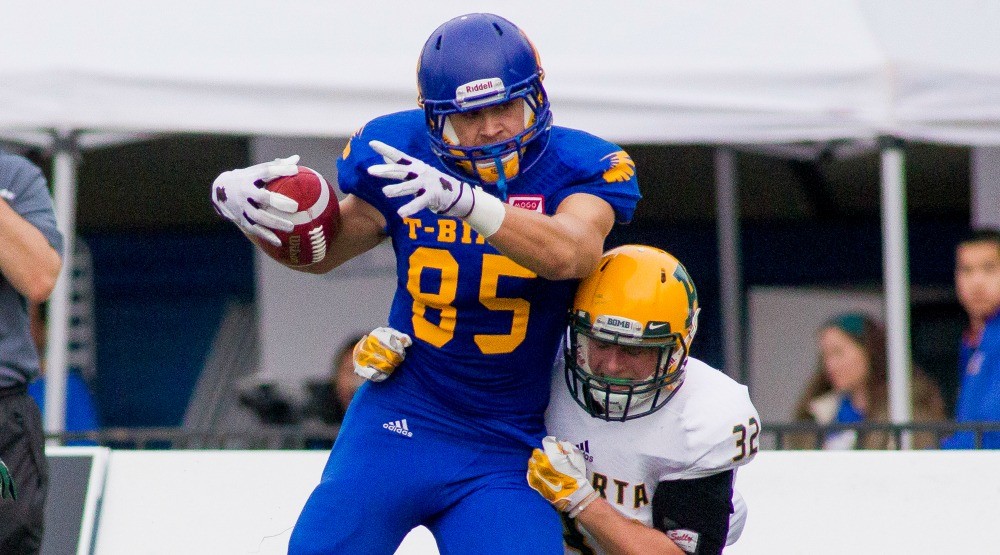 For a lot college football players, their playing days end after receiving their diploma. Alex Morrison is not one of them.

The fourth-year UBC Thunderbirds receiver is another step closer to his dream, getting invited to attend the New York Giants’ upcoming mini-camp in hopes of earning an NFL contract.

After helping the Thunderbirds to a 2015 Vanier Cup championship, Morrison broke his arm two games into the 2016 season, forcing him to watch from the sidelines. Dedicating the season to rehabilitation, the Ontario native’s efforts have been rewarded with the camp invite.

“It’s obviously a bigger stage than what I’ve experienced so far in my life, but it all boils down to the same thing of competing and preparing myself to the best of my ability,” Morrison says of the mini-camp. “It’s obviously a great opportunity to be able to compete for a great organization. I’m just very thankful and can’t wait to get there and compete.”

The camp invite is a testament to how hard Morrison has worked to come back from such a devastating injury.

Morrison will join three fellow U Sports football players in next week’s Giants’ camp. He is the fourth player under UBC Thunderbirds head coach, Blake Nill, to be invited to an NFL camp.

“In the past five years you’ve seen an increase in the interest level in U Sports athletes by the NFL,” said Nill. “It’s an indication of not only the development of these athletes, but also the priority U Sports universities have put into their football programs and their coaching.

If Morrison can make a good impression on Giants’ staff, he could acquire a contract and join a receiver corps in training camp that features the likes of Pro Bowlers Odell Beckham Jr. and Brandon Marshall.